Gary Townsend - Founding member and Chairman, GBT Capital Management, LLC, a macro long/short fund based in Chevy Chase, Maryland. Also, 2007-2013, a founding partner, CEO and Portfolio Manager of Hill-Townsend Capital LLC, a long/short equity financial sector fund. Mr. Townsend has 35 years banking, regulatory, and investment experience. He started his business career in 1978, as a consultant and advisor on anti-dumping trade issues primarily to foreign manufacturers based in Asia. In 1982, he began a 15 year career as a U.S. government banking regulator. In 1990, he was recruited to build out a new, independent federal regulatory agency, the Federal Housing Finance Board, regulator of the Federal Home Loan Bank System. As Chief Examiner and Director of Supervision and Examination, Mr. Townsend organized and implemented supervisory examinations of the 12 FHLBanks and Office of Finance with particular emphasis on their funding activities, use of derivatives, safety and soundness and regulatory compliance. In 1998, Townsend joined FBR Capital Markets as a sell-side analyst, applying his banking and regulatory experience to the investment analysis of commercial banks of all market capitalizations. In 2007, Forbes.com named him as "Best Brokerage Analyst" for commercial banks; also Starmine ranked him the #2 earnings estimator (out of 109 analysts) and in the top 10% of analysts for stock picking and earnings accuracy. Townsend left FBR in November 2007 to launch Hill-Townsend Capital LLC. He holds a CPA designation (1999) and a MBA from George Washington University (1979).

This morning.  U.S. equity markets remain in a confirmed uptrend.  Overall trading patterns suggest a slightly positive equity outlook, but the strength and durability of the current uptrend have been in doubt since the uptrend was confirmed on August 22nd.  Equity options markets suggest a bearish short-term outlook.  Asian markets closed mixed, with losses in China on concerns that monetary authorities will raise interest rates over the weekend.  Eurozone equities were higher, but turned lower after interest rates were left unchanged and Trichet’s press conference.  Markets may have been disappointed in the absence of any change in the ECB’s inflation “balanced” language.  Also, a possible rate cut in November appears to have been taken of the table.  The U.S. dollar is mixed.  Commodities markets are mixed.  U.S. Treasury prices are higher.  LIBOR markets suggest heightened interbank lending credit concerns.  Euribor-OIS spreads are trending higher.  After a fair value adjustment of -1.13 points, September SPX equity futures are at 1189.00, down -9.37 points.  The SPX opens at 1198.62, -12.1% below its recent April 29 multi-year closing high, and +1.96% above its 20-day moving average, but -4.01% below its 50-day moving average.  The SPX is -4.69% below its 1257.64 year-end close.  Next resistance is at 1209.54; next support is at 1176.77. 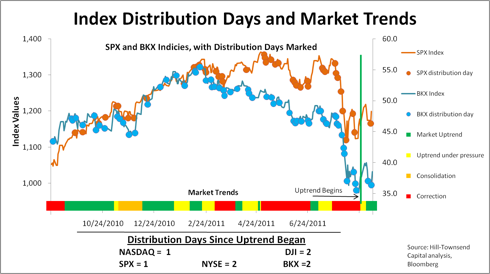 Wednesday.  Markets more than erased their Tuesday losses, gapping higher, trending higher through the day, and closing at their intraday highs.  Volume was disappointing, well below the 50-day moving average.  The Nasdaq led with a +3.04% gain, followed by the NYSE composite, SPX, and DJI, which rose +2.90%, +2.86%, and 2.47%, respectively.  Volatility generally fell through the day from a mid-morning intraday high of 34.70, to a 33.38 intraday closing low, off -9.78%.  While health care gained +0.29%, all other market segments closed off at least -0.24%.  All markets segments closed at least +1.06% higher, led by financials, oil and gas, and industrials.  Financials led with a +4.75% gain.  Consumer goods, telecommunications, and utilities were the laggards.

In Japan, the Nikkei closed at 8793.12, up 0.34% on a -19.2% decrease in volume.  The index gapped immediately higher to the 8876.49 intraday high, but quickly lost momentum and traded back to a small loss just before midday.  The afternoon trade was quiet, but recovered mildly in the final hour to end with a modest, but still disappointing gain.  Most segments gained.  Leaders were oil and gas, health care, and consumer services, which rose at least +1.22%.  Financials, telecommunications, and industrials closed lower, with financials off -0.03%.  The NKY closed below its 50-, 100-, and 200-day moving averages, -14.0% below its 2010 close.

U.S. news and economic reporting.   Thursday’s focus turns to initial and continuing jobless claims for the latest week as well as the July trade balance.  Actual initial claims were K, compared to 405K survey and 409K prior.

Overseas news:  Today, the European Central Bank and the Bank of England both left their benchmark interest rates unchanged.  Today, the Bank of France trimmed its growth forecast for the third quarter to a +0.1% growth rate.  Today, Finland’s finance minister said the country will not participate in any future bailouts unless collateral is provided by the aid recipients.  In July, Spain’s industrial output fell -2.8% over the prior year, the fastest drop in more than a year.  Today, Fitch warned it may downgrade China’s credit rating within two years based on risk to banks’ balance sheets.

Wednesday’s equity markets.  On light volume, equity markets posted substantial gains.  The Nasdaq, NYSE, SPX, and DJI all finished higher, up +3.04%, +2.90%, +2.86%, and +2.47%, respectively.  After opening the month of September with 3 straight losing sessions, futures indicated a strong rebound from an oversold condition. The DJI had lost -4.1%, marking one of the worst September starts since 2002 and the 4th worst for the DJI since 1896.  In the three September starts that were worse, 1931, 1946, and 2002, the index posted full year losses of at least -8.1%.  Prior to the opening, mortgage applications fell for the 3rd consecutive week as fewer Americans refinanced and purchases stayed close to a 14-year low.  Markets opened higher and gained steadily through the day.  Management shake ups at BAC and YHOO helped to fuel the market, but in general, news was light, and investors spent the day speculating on the president’s Thursday night speech on jobs and economic stimulus.  Markets climbed through the afternoon, and moved higher after the 2:00 release of the Fed’s Beige book, which seemed to confirm that the economy is growing at a slower pace than expected and consumers and firms are spending less.  Markets corrected slightly just after 3:00, but reversed course and finished on the highs.  The VIX finished the day at 33.38, down -9.78%.

Trading desks reported light volumes.  Traders discussed that the upward move was helped as sellers seemed to disappear.  Several desks reported that shorts didn’t press their positions on this up day, but didn’t cover positions either.  Technically, the bounce off of 1136 was consistent with a Fibonacci retracement from last April's SPX highs.  The light volume places that conclusion in some doubt, as volumes were anemic.  The AAII Bullish Investor Sentiment index for September 8th was 30.2, lower than the previous reading of 38.62. The relative strength indicator rose to 47.74 from the previous day’s reading of 41.27, still in a neutral range.

All market segments were positive. Financials, oil and gas, and industrials were the leaders, while consumer goods, telecommunications, and utilities were the laggards.

Financials outperformed the broader indexes. The KRX, BKX, and XLF were all higher, up +5.93%, +5.88%, and +4.79%, respectively.  News of a management shake-up at BAC helped propel BAC higher by +7%.  There was relatively light news flow from the financials, and investors seemed to see a bottom in this oversold group. The BKX finished the day with all 24 names higher.  RF, HBAN, and KEY were the leaders, up at least +8.67%.  Laggards were CFR, CBSH, and NYB, up at least +2.59%.  The KRX finished the day with all 50 names higher. Leaders were SNV, PVTB, and SUSQ, up at least +8.13%. Laggards were BRKL, FFBC, and CHCO.  Among the broader financials, RF, CBG, and AIG were the leaders, though banks dominated the top 10 gainers.  Within the banks, however, the regional banks had a better day than did the money centers, as investors remain cautious about those names.  The BKX, KRX, and XLF all finished below their 50-, 100-, and 200-day moving averages.  While the broader indexes have recovered their post-September 2008 losses, bank stocks have not, with the BKX closing -33.5% below its April 2010 high and -53.3% below its best level of 82.55 in September 2008.