Spent over 30 years in computer systems work, many different functions. Owned my own business for awhile. Got tired of it (managing employees is not my baliwick) and stopped doing it professionally. Did other things, off and on, for some more years and finally bumped into this investing/trading stuff. "Looks like a challenge" said I and jumped in (I've found I'm happiest learning new things and overcoming challenges - this certainly qualifies as a challenge). Still on the steep side of the learning curve, but with facilities like Seeking Alpha, internet availability of all sorts of information and dedication, I'm beginning to improve my performance. As part of that learning, I've recently been working on learning technical analysis of charts. I Have been using covered call options for a while and had good success with that, so I'm currently studying and playing with small positions using other option strategies. Being interested in a lot of different things, I had a desire to check out natural gas, due to its environmental and potential cost benefits. Fortunately, before I dabbled in it, I had already learned to not trade on emotion and had started getting familiar with how I might more effectively use technical analysis of charts. My first foray into NG, using UNG, I made a small return in a short time, thanks to the charts. As time goes on, I'm discovering additional resources. It looks like I might enjoy doing this for a long time. Because of my background, I guess, I'm a big believer in "community knowledge". That is what any one of us knows is available to all the community members, except for those that need a serious "attitude adjustment". I enjoy learning from all and sharing what I may have to contribute.

For a long time I've been interested in the mechanics of the trading environment, specifically market-makers, daily short sales, and fails-to-deliver.

For not quite as long John Petersen and I have had a slightly different view of the meanings and utility of daily short sales and fails-to-deliver.

It's likely that we are each both right and wrong as part of our hypotheses proves correct and part wrong, likely dependent on time-frames and other factors.

I wanted to do this because there's apparently some doubt about John's, and my, belief that the big uglies are really pretty-much exhausted. I figured if there was a second set of data that suggested such maybe John wouldn't have to repeat it so often. Refreshing your memory, John believes that daily short sales are a strong indication of the level of big uglies active while I believe that, over the long run, that daily shorts will eventually be much like the other 18K companies on the OTC - around 40% daily shorts on average across all companies.

My intra-day statistics have been reporting for some time a metric which I believe supports the big uglies being mostly gone. But since they are totally experimental and can't be taken as gospel ...

I threw together some charts this weekend that present some minimal data not presented before for your perusal. For both the believers and doubters, these might sway you one way or the other.

Before trying to interpret what's there, read this Frequently Requested FOIA Document Fails-to-Deliver Data, What You Should Know About the Data.

The most import things to take from that, IMO, are:
- data is delayed to us for, IMO, all my usual TFH reasons - or they don't have computers I guess;
- the numbers are cumulative - not daily transactions;
- this means we can't, at any given time, tell what's new fails or which prior fails have been satisfied;
- there's supposedly lots of valid reasons for fails that are not nefarious in nature, such as failure to borrow before shorting (in our case I think this is unlikely to be a concern, thanks to some education from John).

The reason for failure to deliver I think applies in most cases are the certificate conversion issues John has informed about. There seems to be another related to where the Mega-C shares were held, since we had some movement that seems related to the time we think they came into the market. And based on the activity since we believe the big uglies exited, there are other unknown and not illicit causes ... maybe.

I would call your attention to the 2012 charts and the big change in fails that start to appear in the August time frame, when my intra-day statistics suggested to me that exhaustion of big uglies was beginning, which I stated many times. Then notice the change subsequent to the mid-September time-frames. I don't recall exactly when, but I think both John and I were saying they were gone starting somewhere around November. I'm too darned lazy to go searching though - you'll have to do it yourself if you really want to know.

I'll update the latest charts about every two weeks so we can try and detect (quite belatedly of course, thanks to the SEC policies and, I guess, lack of computing equipment throughout the government and industry that would permit timely dissemination of data) any changes that might affect some of our behavior ... other than carping about drying paint, etc.

I hope you find this somewhat useful.

Note also that the fails to deliver data points have been offset negative three days, trying to match the anticipated T+3 settlement date to the date the trade was made and allowing the prices at the time of the sale to match. Note that the fails price is the price reported by the SEC at the end of each day, so the fails price shown is three or more days later than the estimated trade date shown on the charts. 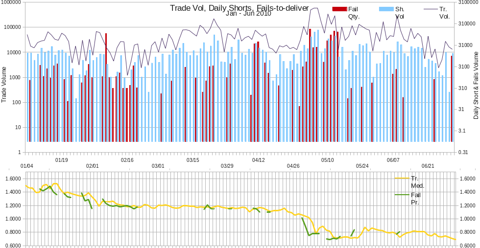 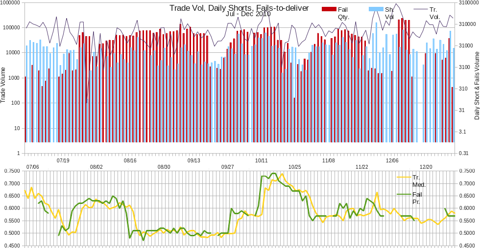 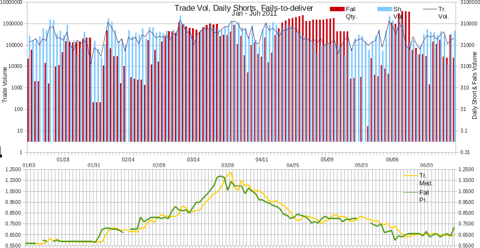 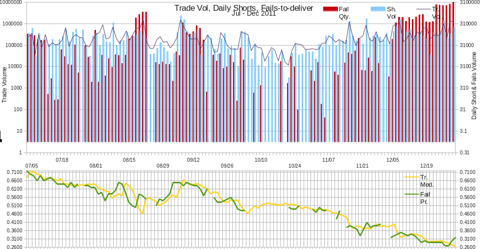 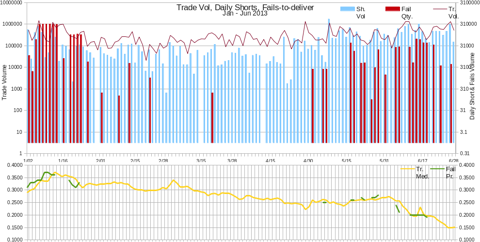 I have "un-adjusted" data subsequent to 9/5/2014 so that prices and volumes would appear as if the 50:1 reverse-spilt never happened. This was to allow my natural inclination to laziness to dominate, as well as due to lack of time to undertake the effort that would be needed. I'll go to the natural volumes and prices, probably, with the start of next year's chart, if it seems worthwhile doing a chart at all for a stock trading around $0.03 pre-split VWAP.

Disclosure: The author is long AXPW.

Additional disclosure: Most of my stuff is experimental. I'm still early in the learning curve. I have a tin-foil hat and hate our so-called regulatory process.