I'm a long-time Market Participant who has criss-crossed the Market for more years than I care to remember, and a few years ago I got hooked on studying and trading ETFs, especially the leveraged kind. Charts, good charts are an absolute necessity in this field, so the Linchpin of my ETF Website http://etfadvantagereport.com/ is the charts. These charts are unique not only in being attractive and easy to read, but also in what they represent. Sure, at first glance there is nothing unique about the 10 Day yellow, the 20 Day red and the 50 Day green Moving Averages. Most charts carry the same outline, but there is where the comparison ends. Check the chart diagram we show from Oct 6th on our website, The page is called "How to read the Charts" , it is an Intraday DOW Chart and helps to explain what it is that makes our charts more useful and different from the rest. It is all in the way they are interpreted. As I see it, a Moving Average has three Internal Components. The 10 Day MA [yellow line] is being influenced by the mood swings of the participants who trade this Index, which I therefore call Index-Sentiment. The 20 Day MA [red line] is being influenced by the Internal Component Companies that provide the Base-Support to the Index. But most important is the 50 Day MA which reflects the Internal Trend-Momentum of an Index and its ETF. Also, MACD Index I interpret as the MAC Bull, Bear Relative ETF Momentum Index which tells to what degree Momentum is on the side of the Bulls or the Bears. The same with the RSI Index which I interpret as the Bull, Bear Relative ETF Strength Indicator, pointing to which is the stronger of these two. Now for these green, red and yellow lines to make any sense, they will have to move in tandem and in a configuration which will indicate if an Index or ETF is bullish, bearish or anything in between. Check this diagram chart and note the bearish Configuration on the left, with the yellow Index Sentiment line close and above the Index, followed by the red Base-Support line and the green Trend-Momentum all heading South in tandem. Now, that is bearish in a situation where the inverse Bear-ETFs will rally. Conversely, note what a bullish Configuration looks like when the yellow line below the Index and followed by the red and green lines all heading North in tandem. Now that is the time when the Bull ETFs will rally. When on a daily chart you see a distinct configuration pattern like these two, consider the market to be in an intermediate or even major trend when the appropriate ETFs can safely be traded. But in a Bouncing Ball Market like we've experienced over the past months, these lines will be trendless and all over the charts, and that is the time to be mostly on the sidelines, observe and wait. Sooner or later these trends will be back, and that is what we have to be ready for. Now, on my ETF Website you will find twelve Charts which reflect the correlated activity in a broad range of equity and commodity sectors, including the ETFs. Put it all together, and you will be on the right side of the market with the right ETFs at the right time.

But lucky for the bull, he keeps finding overhead air-pockets to float into and because there is no significant downdraft to speak of the bull is in a position to meander sideways to higher highs. This is why Wall Street is experiencing some of the flattest trading sessions in years, and it remains to be seen if June's strong jobs report will finally put some moxie into the upside momentum which has gone totally flat since early June.

But check the Troika and note something interesting. In early May the Moving Average configurations for the two bull components [RSP] and [SPXL] were at an inflection point and ready to push the market in either direction. At that time, the green and red moving average lines were totally neutral, but by the middle of May these lines had turned decidedly bullish with the red lines rising above the green lines. This caused the MACD momentum bars to get in on the act by rising strongly above their respective demarcation lines in early June, which in turn pushed the RSP and SPXL into nosebleed territories.

This is why a pullback by the market at this stage is not only probable, but also desirable. It would give the market a chance to find some traction for a genuine and solid rally, which could have some decent and participating volume behind it and anchor momentum to the upside.

Meanwhile, the bear-component [SPXS] of this Troika continues to hide in a deep hole at the bottom of a deep pit. The MACD upside momentum for this bear is zilch and so is its RSI strength indicator. The MA lines configuration [green line above the red] continues to be exceedingly bearish for the bears and so present no danger for the bulls in this game. This means that the only way for this market to come down, is for the bull to stumble. 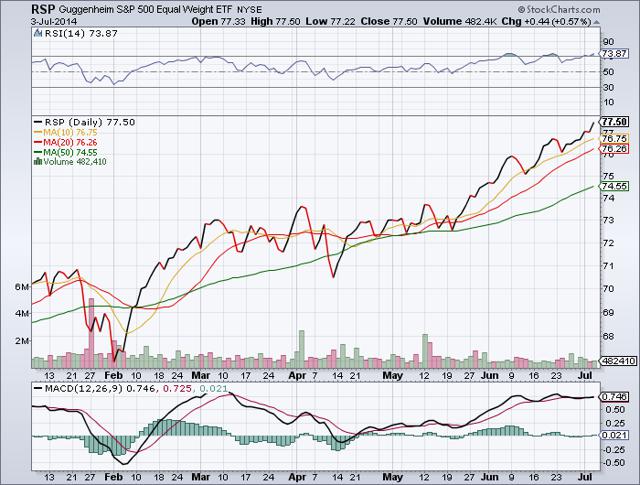 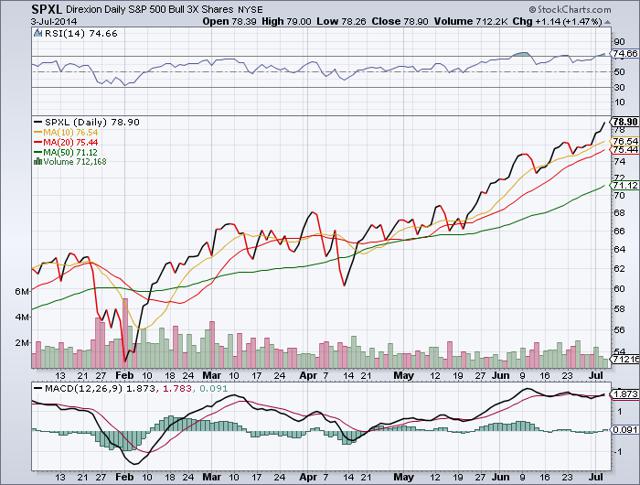 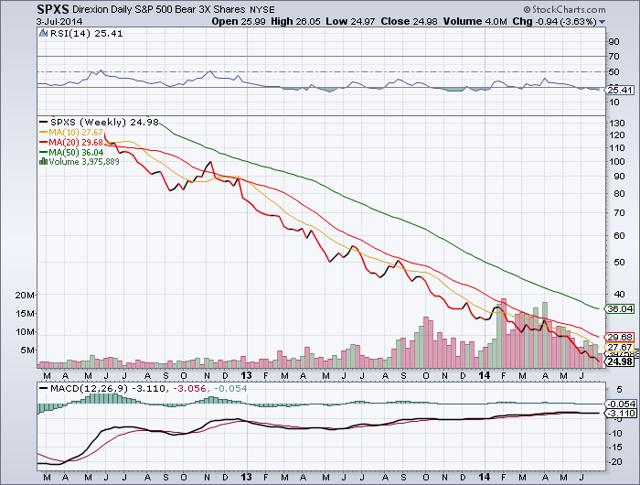 Now, some market strategists believe that the upcoming second-quarter earnings season is poised to deliver some substantial upside surprises in which most S&P 500 companies would return to double digit growth for the first time in nearly three years. This could give the market the incentive to keep climbing further into record territory, and for the economy to create more jobs. But that could spur the Fed to tighten monetary policies and raise rates sooner than anticipated, and the market surely wouldn't like that.

But one big plus for the market are the small-caps [RUT] which are poised to take over the leadership in this game. This index not only continues to be well supported by its exceedingly bullish MA lines configuration [green line below the red] but finally and for the first time this year the weekly MACD momentum bars managed to climb above the demarcation line. That is bullish for the small caps and also for the RSI strength indicator which is back solidly in bullish territory. 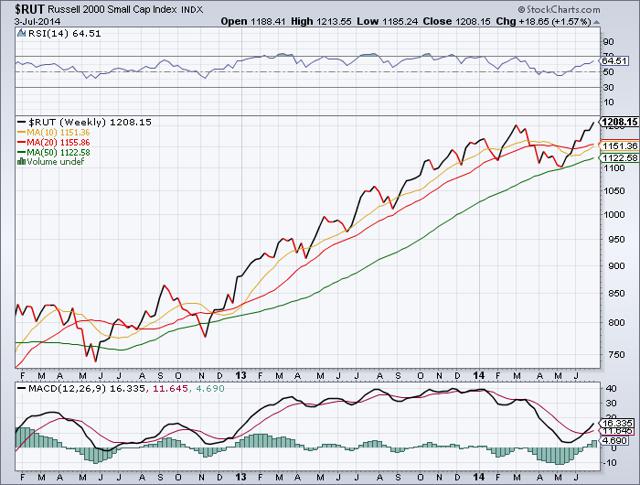 The weekly NASDAQ index [COMPQ] also reflects solid support for the overall bull market. Sure, this index shot up too far and too fast and that is putting its RSI strength indicator into nosebleed territory. Obviously, a pullback here would be positive for the market.

Meanwhile, this index remains well supported by its bullish MA lines configuration [green line below the red] and its MACD momentum bars which for the first time this year managed to climb above the demarcation line into bullish territory. 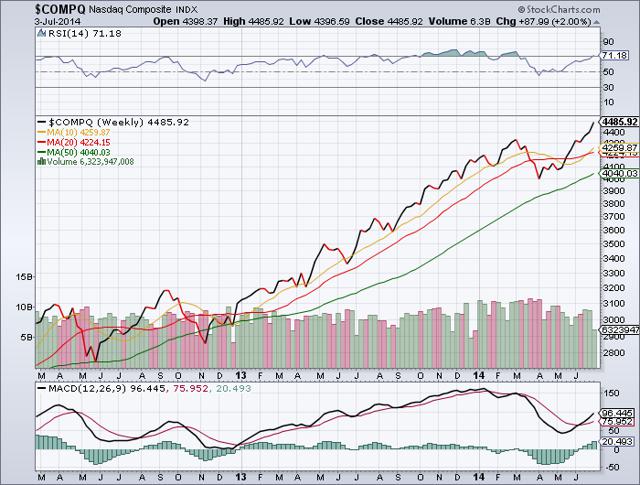 This commodity producers' index [CRB] is slipping while its RSI strength indicator and MACD momentum bars have both entered bearish territories. But for as long as its MA lines configuration [green line below the red] remains bullish, commodities generally could enter a consolidation phase, and not decline further to any extent.

Yet, this index's twin the [BDI] demand index is still bearish and reflects the lack of demand for commodities especially the metals, even though the metal indexes are spiking as reflected by the copper index [CU.] Go figure.

The bearish MA lines configuration [green line above the red] for the BDI, as well as its bearish RSI and MACD indicators suggest that the commodity markets will stay flat at best. 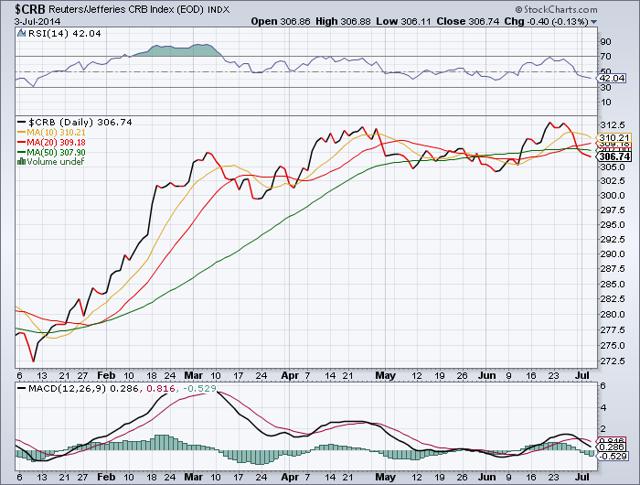 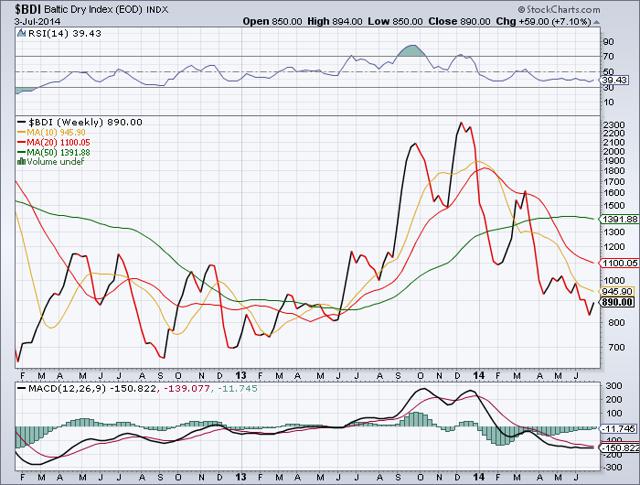 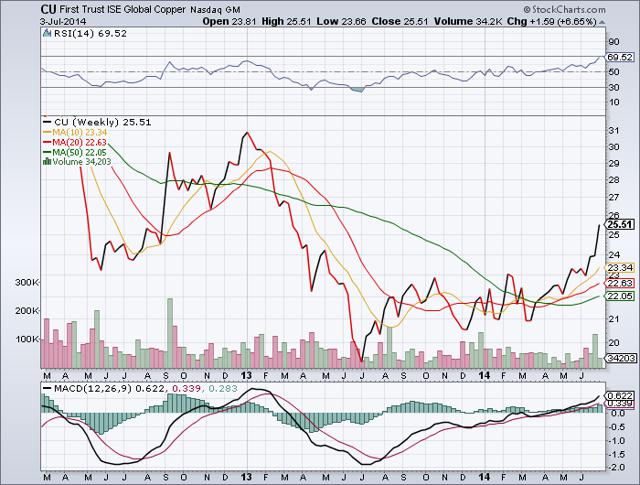 The yellow metal [GOLD] appears to be catching bottom now that its weekly MA lines configuration [green line below the red] appears finally to turn bullish again. But the MACD momentum bars will have to stay above the demarcation line before gold can kick into a sustainable rally. We'll see. 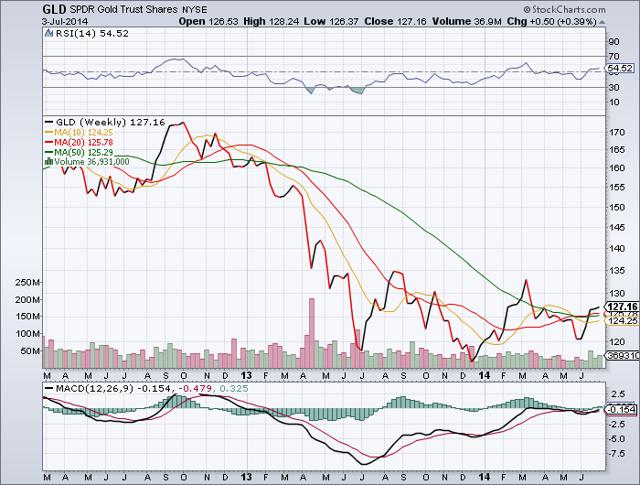 For the first time this year oil [WTIC] is sporting a bullish weekly MA lines configuration [green line below the red.] This means that oil is forming a base around the 105 level from which to mosey sideways for a while, or get a renewed rally going. In any event, there appears to be no downside risk for oil. With its MACD momentum bars steady above the demarcation line, the momentum for oil continues to be to the upside. 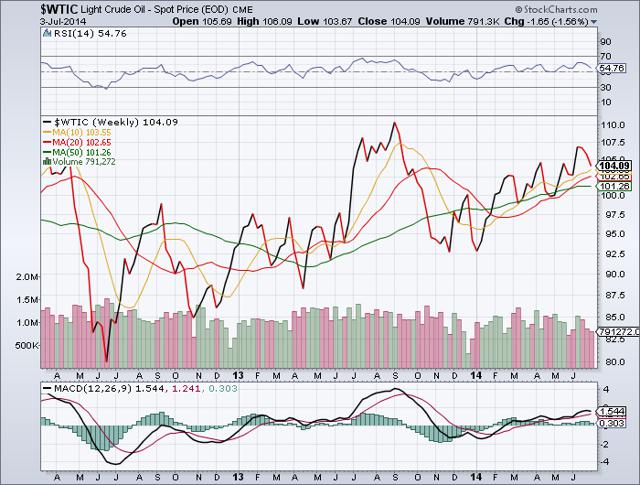 Over the last four years this rally was fuelled by the fumes of an empty gas tank, aka the Fed's QE programs. Now that the Fed is tapering the money flow of these programs, the market is demanding the real stuff like steady economic growth.

This transition will probably cause some selling squalls in the market along the way. But that would be buying opportunities, especially for the leveraged bull and non-leveraged long ETFs.

A proven way to find these things is to check back on the ETFs featured in these blogs that go with the flow of the market, and show steady price appreciation over time. The following ETFs fall into that category.