I'm a long-time Market Participant who has criss-crossed the Market for more years than I care to remember, and a few years ago I got hooked on studying and trading ETFs, especially the leveraged kind. Charts, good charts are an absolute necessity in this field, so the Linchpin of my ETF Website http://etfadvantagereport.com/ is the charts. These charts are unique not only in being attractive and easy to read, but also in what they represent. Sure, at first glance there is nothing unique about the 10 Day yellow, the 20 Day red and the 50 Day green Moving Averages. Most charts carry the same outline, but there is where the comparison ends. Check the chart diagram we show from Oct 6th on our website, The page is called "How to read the Charts" , it is an Intraday DOW Chart and helps to explain what it is that makes our charts more useful and different from the rest. It is all in the way they are interpreted. As I see it, a Moving Average has three Internal Components. The 10 Day MA [yellow line] is being influenced by the mood swings of the participants who trade this Index, which I therefore call Index-Sentiment. The 20 Day MA [red line] is being influenced by the Internal Component Companies that provide the Base-Support to the Index. But most important is the 50 Day MA which reflects the Internal Trend-Momentum of an Index and its ETF. Also, MACD Index I interpret as the MAC Bull, Bear Relative ETF Momentum Index which tells to what degree Momentum is on the side of the Bulls or the Bears. The same with the RSI Index which I interpret as the Bull, Bear Relative ETF Strength Indicator, pointing to which is the stronger of these two. Now for these green, red and yellow lines to make any sense, they will have to move in tandem and in a configuration which will indicate if an Index or ETF is bullish, bearish or anything in between. Check this diagram chart and note the bearish Configuration on the left, with the yellow Index Sentiment line close and above the Index, followed by the red Base-Support line and the green Trend-Momentum all heading South in tandem. Now, that is bearish in a situation where the inverse Bear-ETFs will rally. Conversely, note what a bullish Configuration looks like when the yellow line below the Index and followed by the red and green lines all heading North in tandem. Now that is the time when the Bull ETFs will rally. When on a daily chart you see a distinct configuration pattern like these two, consider the market to be in an intermediate or even major trend when the appropriate ETFs can safely be traded. But in a Bouncing Ball Market like we've experienced over the past months, these lines will be trendless and all over the charts, and that is the time to be mostly on the sidelines, observe and wait. Sooner or later these trends will be back, and that is what we have to be ready for. Now, on my ETF Website you will find twelve Charts which reflect the correlated activity in a broad range of equity and commodity sectors, including the ETFs. Put it all together, and you will be on the right side of the market with the right ETFs at the right time.

Wall Street down for the ninth consecutive session last Friday, in a string of red not seen since the depths of the 2008 financial crisis.

Yet, despite the bearish outlook for the market the underlying economy is showing signs of strength as strong labor demand is boosting hiring and rising wages. But this could also tempt the Fed to hike its discount rate sometime this December, a prospect that gives the market the jitters.

Check this DOW chart [INDU] and note that all about this index is bearish. Not only is this index performing an impressive nosedive, but the Moving-Average lines configuration [red line below the green line] is heading for the bottom as well. The RSI strength indicator and MACD momentum bars are both in their respective bearish territories, which will only accelerate this selling squall.

So, it's going to be interesting to see who of these two U.S. presidential candidates can spark a reflex rally in the days ahead. 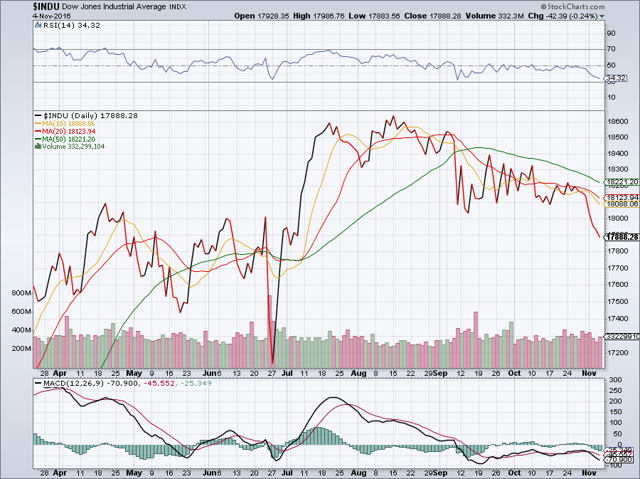 This large-cap index [SPX] paints a bearish picture of the market as well. Not only is this index in a freefall, but the MA lines configuration is also bearish with the red line below the green. The MACD momentum bars are stuck deep in bearish territory, and so is the RSI strength indicator. 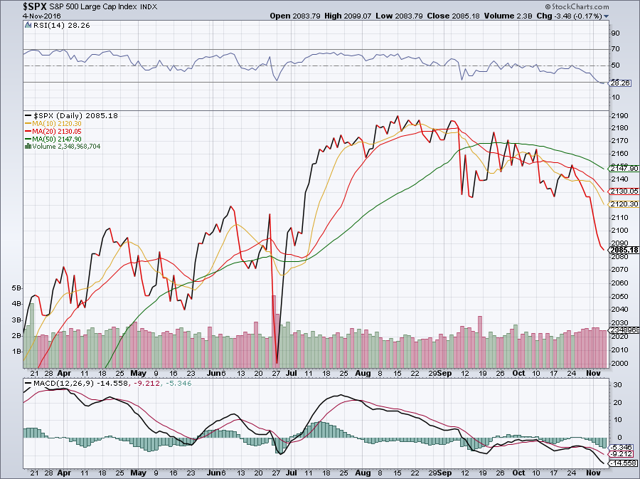 Just like other major indexes, NASDAQ [COMP] has turned totally bearish with the red line crossing below the green. The MACD momentum bars and RSI strength indicator have slipped deep into their respective bearish territories, which adds to the negative sentiment that has engulfed the market. 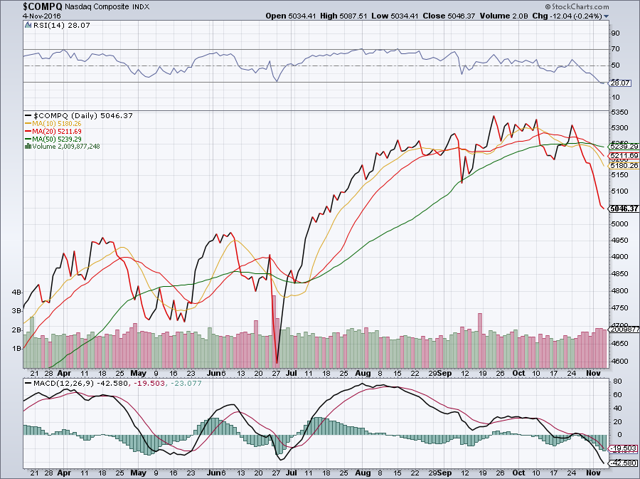 The small-caps [SML] and mid-caps [MID] are extremely bearish from top to bottom, and that doesn't look good for the bulls in this game. One has to wonder if the U.S. presidential election has something to do with that. 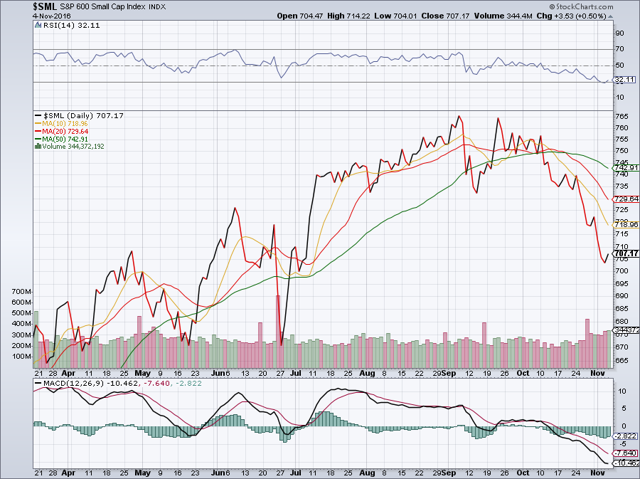 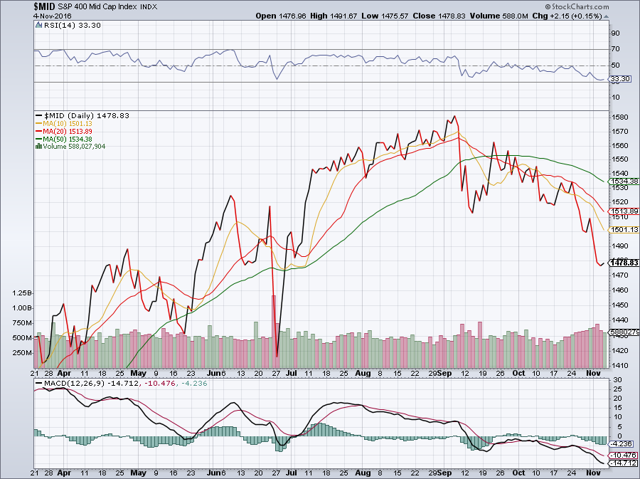 This discretionary sector [XLY] of the market appears to have given up its ghost. Besides the steep nosedive of this index the MA lines configuration is sharply bearish below the green, while the RSI strength indicator and MACD momentum bars are at the bottom of their respective bearish territories.

Without the support of the discretionary index this market will have a tough time maintaining a sustained rally. 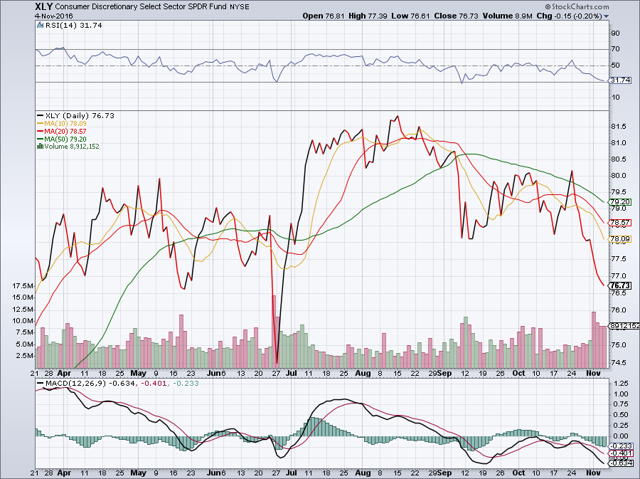 The market's fear index [VIX] is rallying strongly with all its components in their respective bullish (??) territories, and that surely is bearish for the market. 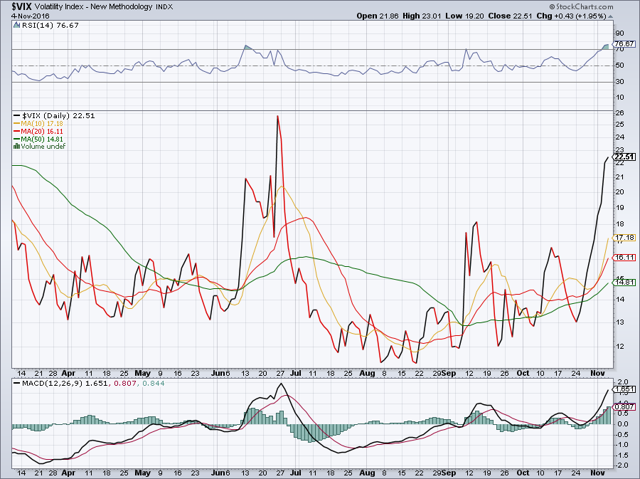 Investors' confidence in this market [XIV] remained fairly bullish between early August and early November when the red MA line crossed above the green. Usually, that makes for a bullish market. But this time, with the RSI strength indicator and MACD momentum bars stuck deep in there respective bearish territories, the bull may have to wait a while longer. 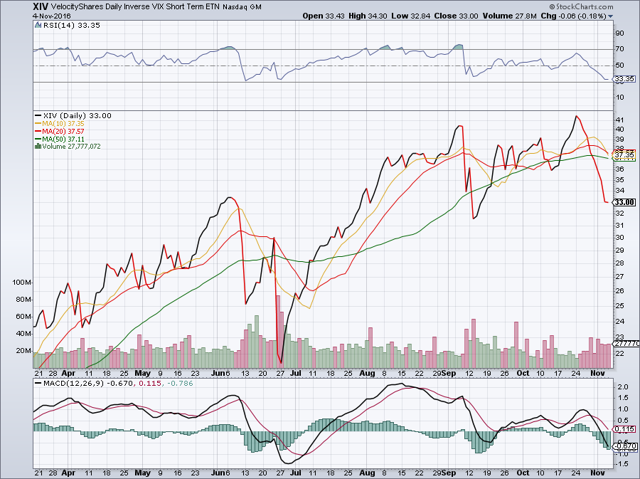 The bull in this game [SPXL] sure looks like a bear. While this index is nose-diving, its MA lines configuration remains sharply bearish with its red line below the green.

At the same time, the RSI strength indicator and MACD momentum bars are deep in their respective bearish territories, and that will put a lid on any rally attempt 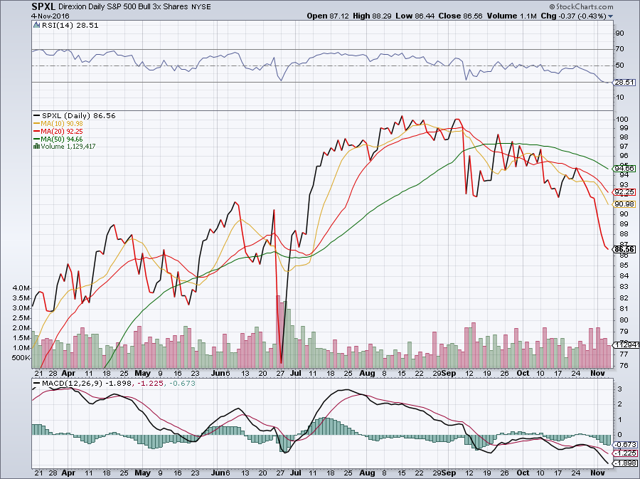 For the first time in eight years the bear [SPXS] finally turned bullish This index rallied strongly and so did the RSI strength indicator and MACD momentum bars, both of which are in their respective bullish territories.

Most importantly for the bears, the MA lines configuration for this index has turned positive when the red line crossed the green line last September. But will this bear-rally last? That may depend on the outcome of the U.S. presidential election. 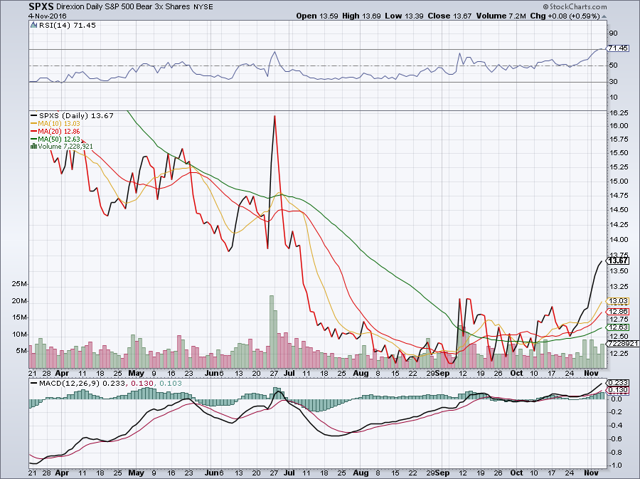 The yellow metal (GOLD) continues its rally mode while being well supported by the RSI strength indicator and MACD momentum bars, both of which are in their respective bullish territories.

But for as long as the MA lines configuration remains so extremely bearish [Large gap between the red line below the green line] gold remains vulnerable to a sharp selloff. 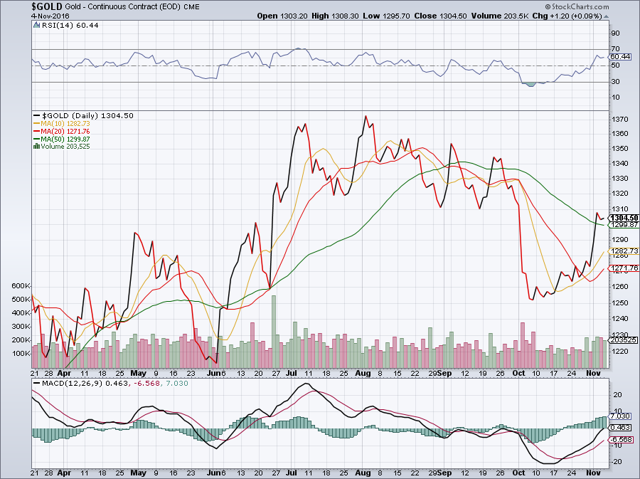 OIL [WTIC] continues its steep nosedive which was triggered by this index's double top last October. Although both the RSI strength indicator and MACD momentum bars have declined deep into their respective bearish territories, for as long as the red MA line stays above the green line, oil's bias remains poised to the upside. 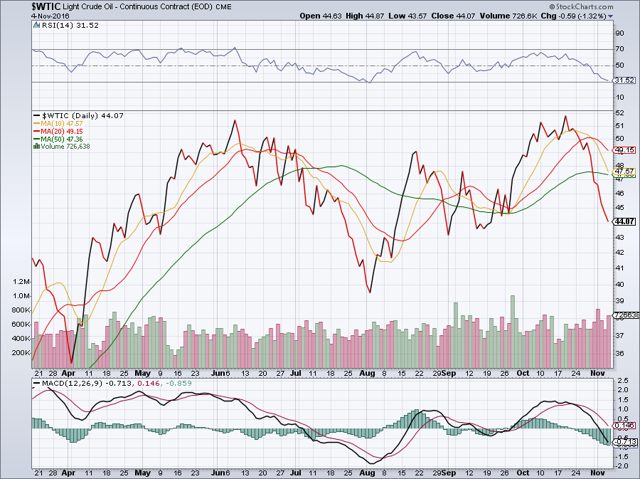 Check my Home-Page for more info on favored markets and ETFs; and "GOOD LUCK!"