I am founder of Dalton Financial News. I woke up to the real state of the Global Economy back in 2009 and have since changed my life drastically. I have grown more open minded and questionable of the status quo and strive to be as knowledgable as possible on all subjects that interest me.

I've been looking back at the Silver Bull Run and re-visiting old charts. I began to look at the major corrections that Silver has suffered during it's past 10 years and mocked up the chart below detailing the common lines of support and resistance of each correction. 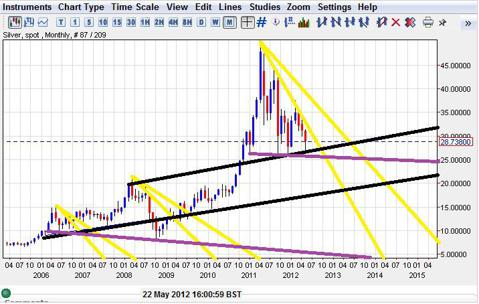 As you can see their appears to be a pattern here. Let's talk a little about the coloured lines.

The Purple lines on the chart are the "Correction Bottom Support Lines". They are traced from the first defined pause in the first parabolic leg up, and lead down to the ending point of the second drastic drop from the peak. The first time this occurred in 2006 and successfully lead to show the support and bottom of the huge 2008 correction.

The Black Lines show the average trading range dating from the first real "boom" in this Bull market. We are outside of this range at the moment (barely). Since the top of the trend line coincides with the $26 level support a this point in time, it looks to be a line of support too. Look back at 2006 and the lower Black line. Back then this trend line served as great support for Silver, maintaining a slow but steady uptrend carrying it to it's next parabolic phase. If Silver can hold it's bottom around $26, then the upper Black line could act as support, just as the lower Black line did in 2006, carrying us through these hard times in the market to re-test the highs.

Last but not least, the Yellow lines. These lines come in pairs and the first is traced from the peak and shows the first points of resistance in a confirmed down channel. Once broken through, the second line is traced to the second significant peak. The space between the 2 is the struggle period, where a fight to establish an uptrend is fought between Bulls and Bears. Both the 2006 and 2008 correction saw the Bulls win, and a fairly steady up channel be formed leading to another parabola in price. Please note that the second yellow line from the 2011 peak is just a guess. It is drawn to line up with $37 resistance, a price point that I believe to be of resistance due to the neckline on the failed inverted head and shoulders.

Now let's look at the Silver weekly chart dating from the 2011 parabola. 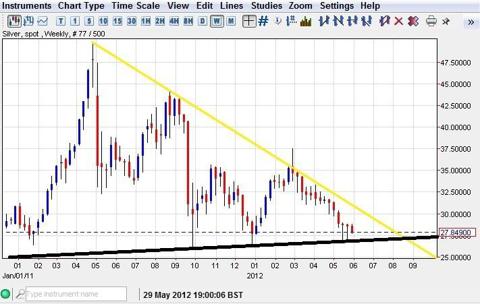 As you can see, the Black line that I showed you in the monthly chart is holding up very nicely in the weekly chart. Notice how violently we bounce off of the trend line, this is indicative of strong hands in my opinion.

Now, it's early days to determine for sure whether or not this pattern will continue, but with the way things are holding together at the moment I'd say we have a decent chance. For anyone looking to buy Silver, now may prove to be a good entry point in the long term.