Large concentrated amounts of volume will appear during the intial stages of an uptrend, which is a telling sign of forthcoming strength. It is a direct result of INSTITUTIONS that accumulate massive long positions at the start of a major move. But as time and price begin to 'weigh' on the maturation of a bullish advance, the trend grows weaker on diminishing amounts of volume even when the stock is making new price highs. The interpretation is that investors are losing interest, and a top is near.

Likewise, in the case of a downtrend, new price lows on declining volume indicates that buyers are 'eating up' the supply, and the trend is ready to reverse. There are even occasions where the reversal transpires as a 'volume spike,' but you see very little price movement.The message is that the extremity of selling pressure within the move lower has reached a point of exhaustion.

Based on the corresponding characteristics exhibiting in both Gold and the Miners, there is overwhelming evidence that supports their current down trending structure to be coming to an end. Let me explain.

The yellow metal has now entered the accumulation phase, where big firms initiate a 'scale in' approach to purchase blocks of millions of shares over a designated time frame. Since legally they cannot buy the entire shares float all at once, this strategy is widely used and seemingly more appropriate. Furthermore, the lack of selling participation associated with Gold's most recent price decline, on top of the new money inflow, suggests that buying is in effect. 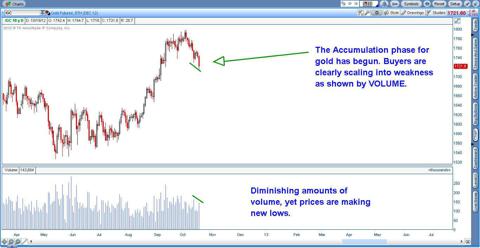 If this methodology happens to 'stretch' the actual turning point as sometimes is the case, my guess is that by the next 5- 8 trading days a bottom should present itself. Rarely do you see a correction last more than three, three and half weeks especially in the birth of a major uptrend. 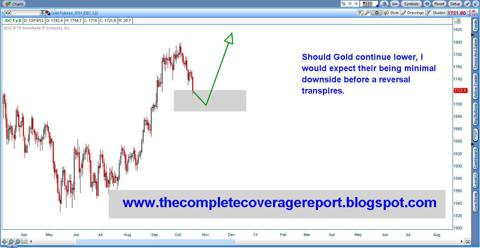 Particularly when an index is so closely linked to the metal it tracks, yet is sensitive to the price performance of the overall market, its true direction can be skewed by such 'pulling' forces. Despite a 200 point drop in the DOW JONES Average on Friday (a mild re-enactment of the 25th year anniversary of Black Monday), and gold moving lower- the GDX actually closed positive on rather large 'spike volume.' This is a clear case of Investors that have seemingly found attractive valuations at current levels for reasons obvious - they are expecting a bottom. 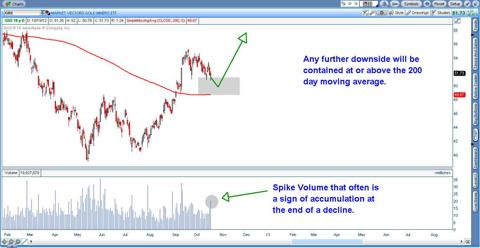 The CC Report premium newsletter offers two subscriptions-$10/month or only $100/year. It is well worth the information you receive.