Gary Tanashian is proprietor of NFTRH.com. Actionable, hype-free technical, macro economic and sentiment analysis is provided in the premium market report 'Notes From the Rabbit Hole' (http://nftrh.com/nftrh-premium/). Complimentary analysis and commentary is available at the public website (https://nftrh.com).

Going back to the run up to the crash of Armageddon '08 through the ultimate bottom in early 2009, we often heard things like "this is a crisis of confidence as much as anything else" with regard to the state of the 'too big to fail' US banks.  We heard this from government officials and from a hell of a lot of mainstream financial services sources; sources whose very existence depended on the above phrase being perceived as true.

The same old bromide [a trite and unoriginal idea or remark, typically intended to soothe or placate] is bandied about with regard to Europe's sovereign debt dominoes, which are a crisis of confidence more than anything else according to soothe sayers.  If only people (i.e. bond buyers) would just have trust that sovereign issuers will do the right thing from here on.

Well unfortunately, this is a crisis - a global one - of very square pegs that do not fit into round holes, no matter how long policy makers the world over stand there and publicly click the heels of their ruby slippers and repeat "there's no place like home".  Home is lost and the ground is quaking beneath their feet as certain realities try once again to break through to the surface.  Realities like this for instance:  'You can't get something for nothing' or to put it in more colorful terms 'Wimpy can no longer have his hamburger today if he plans to pay for it on Tuesday'. 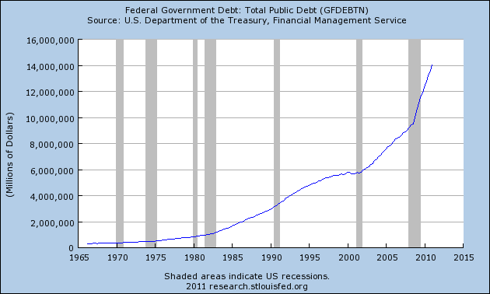 Well, the Keynesian continuum and the many great things that grew out of it are theoretically fine if the economy is running at somewhere around zero deficit (give or take a few hundred $billion).  Unfortunately, graph 2 tells a story of confidence long since lost, and for good reason. 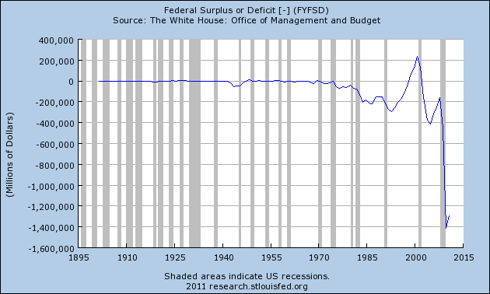 So if they plan to increase the upside ceiling of the parabola, they damn well must do something about the deficit spending that has driven this graph to red line 'Patient Critical!' on the national EKG.  What drove the patient toward his suddenly critical state?  Well, there was nothing sudden about it.  Austrian Economics 101 teaches that the decline as been in play for many decades.

The patient began to degrade at just around the time that the US dollar - AKA King Konfidence - was severed from all ties to the honest and real money anchor known as the Barbarous Relic, gold.  Graph 2 states that extreme budget cutting/tax revenue increase should be forthcoming, but for a final solution, so that we may move on one day as a confident nation once again, the national currency will need to be tied to something other than the confidence of yore.

America is trying to heal itself, but it needs to realize that it is no longer the America that it used to see when it looked in the mirror.  It is now in recovery, and needs some version of 12 steps to progress.  It is a good thing that the debates about debt are front and center now.  It will not feel like a good thing when certain harsh realities are incorporated, but they will ultimately prove to be a good thing as well.

Through all the would-be deflationary impulses that cropped up over the years and decades, the vaunted US debt-for-growth model seemed to mock the Austrians, who insisted 1+1 simply cannot equal $14 Trillion.  Keynes has had his run and now he is nearly done.  Just as the system named for him created many good things through growth out of the stodgy old gold standard system, some day something good can come from this massive macro adjustment as well.

The trick will be in how best to navigate the next few years as the macro adjustment starts to grip.  Keep your heads screwed on straight and be true to yourself.  At least in yourself you can have real confidence until the time comes to have confidence that a sustainable path is within sight.  Meanwhile, there should be very definable 'do's' and 'don'ts' as more details of the debt ceiling debate come out in the wash.

Edit (9:02) I just noticed something in Graph 2 that is really important and strikes at the heart of the matter (and the heart of the macro patient). Look at how orderly and closely spaced deflationary corrections used to be during the gold standard (the only blip being the funding of WWII).

These corrections were healthy and necessary to a real and normal economy.  The golden era can be read as the post war span to the time of Nixon's closure of the 'gold window', as recessions became further spaced while debt remained a non-issue.  Post-1970's, all manner of gimmicks and tricks were employed - with Wall Street in the lead - to live the high life, well beyond our means.

The graph shows an ongoing attempt at forestalling the inevitable or as this guy put it back in 2004:

"In previous articles, I have alluded to deflation being a more natural "corrective" to man-made inflationary excess.  But what really concerns me now is that we have certain Fed governors readying their helicopter fleets to forestall yet another deflationary correction of financial paper alchemy.  Although at this point, I am not sure it truly matters whether we proceed directly to deflation or a more intense inflation of the money supply.  This is because "deflation" has long since become a malignant potential outcome (as opposed to the backbone of progress it had been) due to policy makers' inability to leave well enough alone.  The well-spring of productivity has been drained by ever larger government and spending.  Not only has productive value been drained, but the spending has continued right off the balance sheet and into mind boggling debt.  Thus, a deflationary spiral could only be painful now.  The same entities that have told us they will defend us against it are the ones who made it malignant to begin with.  I can't help thinking of the Jungian "shadow"; the longer it is denied, the more fierce it will ultimately be in exacting revenge for that denial."