YJ Draiman - Candidate for Mayor of Los Angeles 2017 YJ Draiman is the lead elected official 4th term, for the Northridge East Neighborhood Council – NENC, he is also the liaison between the NENC and LADWP. As an Energy Efficiency Advocate YJ Draiman is known for his advancement in implementing Energy efficiency, Renewable energy and Water conservation in the Los Angeles Area. YJ Draiman is promoting his platform of Made in America to bring back to the city of Los Angeles a strong industrial base, increase employment, strengthen education and reduce government and implement fiscal responsibility. YJ Draiman ran for Los Angeles City Council in 2009 and ran for Mayor in 2013. He was sworn in as an elected member of NENC, Los Angeles in April 2010 and was re-elected in 2012, 2014 and 2016. YJ Draiman brings to the NENC Office a unique combination of government, business and community leadership experience. He is also a member of The Northridge Vision Committee. YJ Draiman is a former Real Estate developer with over 20 year’s experience; he has worked extensively in gentrifying neighborhoods. YJ Draiman has vast experience in the deregulation of Utilities and implementing energy and water conservation. He is an Energy Efficiency expert for over 25 years as well as an Alternative Energy authority and a Telecommunications auditor. YJ Draiman has been working in the Energy and the Utility markets for over 20 years. In January 1996 he was asked to run for U.S. Senate, but he declined. YJ Draiman is currently working on his PHD in energy conservation. YJ Draiman participated with the Utility Commission in protecting citizens from increased tariffs, where he championed projects offering opportunities for job creation, economic development, and social services for the less fortunate. YJ Draiman lives in Northridge and is married to Miriam Draiman. They have two sons, David who is a professional singer with a popular rock band "Disturbed" and Benjamin who is a clinical researcher as well as vocalist/musician. 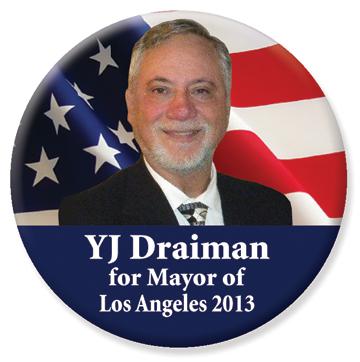 Draiman has formally filed paper to run for Mayor of Los Angeles - March 5, 2013.

Draiman is an Energy Efficiency Advocate and the lead elected official with the goal of Energy Conservation for the Northridge East Neighborhood Council - NENC, from Northridge, California. Draiman is also the liaison between the NENC and LADWP. Draiman is known for his advancement of implementing Energy efficiency, Renewable energy and Water conservation in the Los Angeles Area. Draiman is promoting the theme of Made in America, bringing back Los Angeles's industrial base, increase employment and reduce government with fiscal responsibility. Draiman ran for Los Angeles City Council in 2010. A recent ambitious goal by Draiman is to create in Los Angeles an innovative renewable energy zone approach which will create 200,000+ new jobs with billions in investments over the next 5-10 years.

Draiman is a former Real Estate developer with over 20 year's experience. Draiman has extensive experience in the deregulation of Utilities and implementing energy and water conservation.

In January 1996 Draiman was asked to run for U.S. Senate, but He declined.

Draiman is currently working on his PHD in energy conservation.

The U.S. and the city of Los Angeles economy could expedite its economic revival by accelerating its hydrocarbon exploration and development. A national policy to enhance the development of hydrocarbon will turn the U.S. into a net exporter of hydrocarbon products. The U.S. must also build additional refining capacity at strategic locations in the U.S. to alleviate fuel shortages and increase its export of refined fuel and natural gas. Allocating a percentage of the revenues for the further development of renewable energy, energy efficiency and the development of water resources and efficiencies, including rainwater harvesting and grey water utilization etc. will further fuel Americas economic revival.

"He who controls the energy can controls whole continents"

"Those who control the water sources can control life"

Another avenue to boost the U.S. economy would be to initiate a program for Made in America products. This would require certain tax benefits to the manufacturer of products in America. Any unemployed American, who returns to the workforce, reduces the dependency for financial and social support by the government. Thus it turns the worker into a revenue generator for the government, while the employee's earning are spent on goods and services which boosts the economy further.

The city of Los Angeles must make it easy for businesses to thrive. This will create employment and increase revenues to the government and it will create the multiplier effect.

Increasing bureaucracy, taxes and fees depresses the economy, reduces business development, which in turn reduces consumer spending and as a result reduces revenues to the government.