We all get caught up in bull markets. They're fantastic because it seems that no matter what trade that we get into the profits seem to roll in; even average traders do well during the cycle of the bull. Then all of a sudden we start getting into trades and we see less and less return on them. We look at our account and see a lot of red in our positions, and shake our head and wonder why last week our trades were working, and now not so much.

Unfortunately there is not stop signal or big red arrow that flashes red when the market intends to make a U Turn. It's up to us as traders and especially those that rely on technical charting, to do our due diligence.

With the recent developments of Greece on the verge of governmental collapse, and worse for the Eurozone, default, trading losses over $2 billion at JP Morgan, and a sluggish US Economy it is certainly beginning to feel like the "Sell in May and go away" philosophy sure is holding true. But could we have seen this coming before May. Yes.

I really like the Sector SPDR ETF's they offer a lot of flexibility for a trader and they will flash warning signs of a slowing market in general. The key is to evaluate the trend-lines on these sectors. Trend-lines are formed in a bull market when a series of higher lows develop. The number of higher lows that is typical or ideal for a strong trendline is 3.

The market began its recovery from last year's bout of debtitis when we hit the lows in October. I am going to use the S&P 500 SPDR (NYSEARCA:SPY) to illustrate the overall market performance. The low on the SPY was 107.43 October 4th 2011. That is when the recovery began. As the SPY gained momentum we experienced pull backs along the way that supported the trendline. 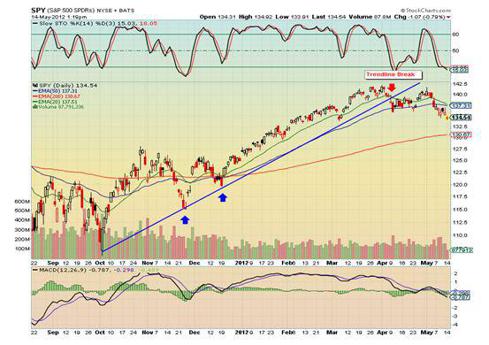 The XLB flashed a sell signal after breaking its trendline March 4th. And we can see on the chart that when it traded back up to its broken support level it then became resistance and since that time it has continued to drift lower. 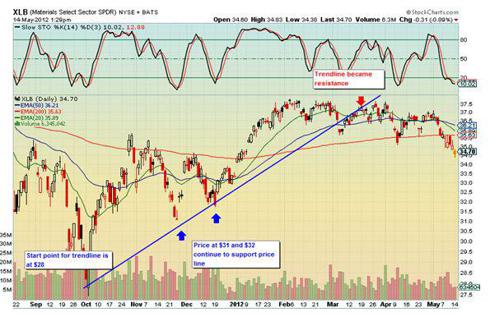 The next sector that flashed an early sell signal that the overall market might be slowing down was the XLI. March 29th is when the XLI breaks its trendline. Much like most sectors this intermediate bull market began with lows of October and November. Then as the XLI broke the trend line it began creating a series of lower lows showing the strength of the bears in selling this sector. 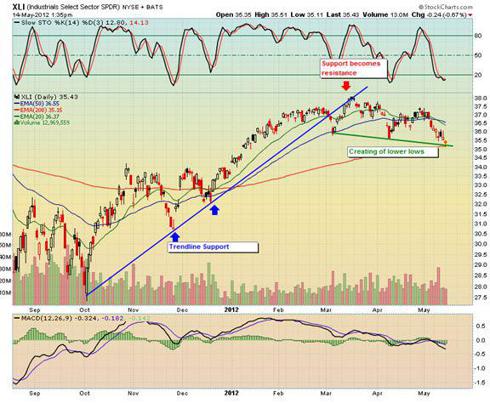 The Energy SPDR (XLE) broke its trendline in early March. With 3 big sectors breaking their trend-lines in Early March that is good portion of the S&P 500 that is beginning to break the trend. 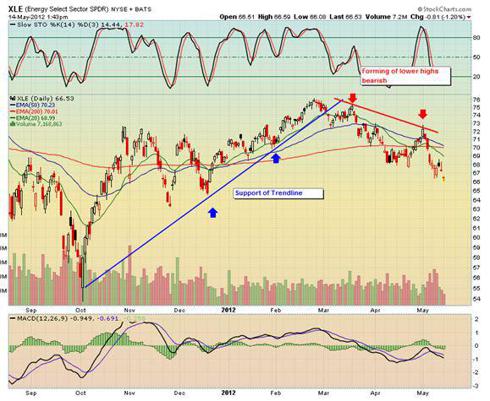 It is not necessary to go through all of the sector SPDRS to get a feel for if the broad market is changing because some sectors are defensive and natured and traders and investors will "flee to safety" to those sectors.

The key with this analysis is being aware of the trendline and that trendline breaks do signal changes in direction of the overall market. The SPY is a good tool to use but if you want to be able to see a break early in the trend the sectors I talked about XLB, XLI, XLE, XLF, are excellent resources for that.