Sufiy is a Seeking Alpha contributor.
We are following Richard Mills on this blog and he has written another very insightful article on the Brine  Mining and - what we call Investment For Life - Potash and Lithium. Richard provides a very deep knowledge of the industry, but can tell the story very efficiently in a straight forward language giving the necessary focus points for the investment decisions. His ability to spot the future trends and companies making it gives him a wide following among junior mining community.
Richard Mills follows a number of companies involved in Lithium and Potash Brine Mining and developing, you can find them on his website with another great articles. Recently he has wrote a piece on International Lithium - we are following here and our Top Pick in the sector; and he was one of the first letter writers to write about Lithium juniors in 2009 including TNR Gold - our Top Pick in Rare Earths, Gold and Copper, Rodinia Lithium - our another Lithium play, Western Lithium, Lithium One and Canada Lithium among others. His Lithium ABC became a classic in this investment sector.
"International Lithium - Salar de Llullaillaco - Mariana Project
ILC currently holds nine highly prospective projects for lithium and rare metals. One of the more prospective lithium properties in ILC’s property portfolio is the Mariana lithium brine project in the mining friendly province of Salta, Argentina.
The Mariana Lithium Brine project is on the Puna plateau which sits at an elevation of 4,000m, stretches for 1800 km along the Central Andes and attains a width of 350–400 km. The Puna covers a portion of Argentina, Chile and Bolivia and hosts an estimated 70 - 80% of global lithium brine reserves." 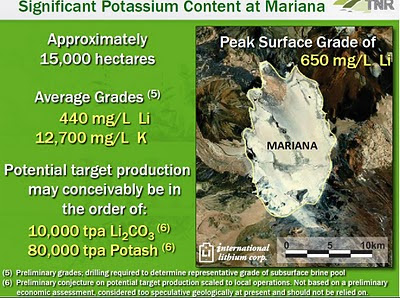 As a general rule, the most successful man in life is the man who has the best information

The Puna plateau sits at an elevation of 4,000m, stretches for 1800 km along the Central Andes and attains a width of 350–400 km. The Puna covers a portion of Argentina, Chile and Bolivia and hosts an estimated 70 - 80% of global lithium brine reserves.

The evaporate mineral deposits on the plateau - which may contain potash, lithium and boron - are formed by intense evaporation under hot, dry and windy conditions in an endorheic basin - endorheic basins are closed drainage basins that retain water and allow no outflow - precipitation and inflow water from the surrounding mountains only leaves the system by evaporation and seepage. The surface of such a basin is typically occupied by a salt lake or salt pan. Most of these salt lakes - called salars - contain brines which are capable of providing more than one potentially economic product.

This Puna Plateau area of the Andean mountains - where the borders of Argentina, Bolivia and Chile meet and bounded by the Salar de Atacama, the Salar de Uyuni and the Salar de Hombre Muerto - is often referred to as the Lithium Triangle and the three countries mentioned are the Lithium ABC’s.

The salt rich brines are pumped from beneath the crust that’s on the salar and fed into a series of large, shallow ponds. Initial 200 to +1,000 parts per million (ppm) lithium brine solution is concentrated by solar evaporation and wind up to 6,000 ppm lithium after 18 - 24 months.

The extraction process is low cost/high margin and battery grade lithium carbonate can be extracted.

The above diagram was designed to show that several commercial products can be recovered from typical brine and that the recovery takes place in a series of steps over the entire evaporation process. Note that the final product in each step may require processing in a specialized plant. Also please note that the actual sequence of process steps may vary from brine to brine, and as such, the process steps shown above may not be in the correct order for any specific brine.

The key factors that determine the quality, economics and attractiveness of brines are:
A common industry axiom says that the ratio of Mg to Li in brines must be below the range of 9:1 or 10:1 to be economical. This is because the Mg has to be removed by adding slaked lime to the brine - the slaked lime reacts with the magnesium salts and removes them from the water.

The porosity of a rock is expressed as a percentage and refers to that portion of the rock that is void space - rock that is composed of perfectly round and equal sized grains will have a porosity of 45%. Fluids and gases will be found in the void spaces within the rock.

By oil and gas standards a porosity of 10% is quite low, but brines are less viscous than hydrocarbon fluids and will flow more easily through rocks with lower porosity and permeability characteristics.

Contributing to efficient solar evaporation and concentration of the Puna Plateau brines are:
A company should have 100% control over the production rate from their salar. It’s possible an aquifer can become diluted - over producing can impact the brine’s salt concentrations and chemical compositions - or depleted by too many wells sucking up more brine than should be produced.

If two or more companies have straws (wells) into the same salar legal battles might result over the sharing of the resources.
Potash is Fuel for Food

Potash is used as a major agricultural component in 150 countries but the largest importers of potash are China, India, the US and Brazil.

Potassium sulfate is commonly used in fertilizers, providing both potassium and sulfur. Potash is the common name for potassium chloride.

The basic fundamentals of the global potash market are hard to ignore:
The current potash market is estimated at 50 million tonnes annually and is projected to grow at a compounded annual rate of 3-4%. Potash is a crucial element in fertilizer and has no commercial substitute.

The world’s future energy course is being charted today because of the ramifications of peak oil and a need to reduce our carbon footprints.

Lithium-ion batteries are quickly becoming the most prevalent type of battery used in everything from laptops to cell phones to hybrid and fully electric cars to short term power storage devices for wind and solar generated power.

The principal use for salt is in the chemical manufacturing business - chloralkali and synthetic soda ash producers use salt as their primary raw material.

Salt is used in many applications and almost every industry:
Global demand for salt is forecast to grow 2.5 percent per year to 305 million metric tons in 2013.

Solar evaporation is the most popular and most economical method of producing salt. China is the world’s largest consumer of salt – other than the dietary needs of 1.3 billion people - there’s an enormous chemical manufacturing industry being built in China.

Boron combines with oxygen and other elements to form boric acid, or inorganic salts called borates.

Borates are used for:
Boric Acid uses:
*Boric acid is used in nuclear power plants to slow down the rate at which fission occurs. Boron is also dissolved into the spent fuel cooling pools containing used fuel rods. Natural boron is 20% boron-10 which can absorb a lot of neutrons. When you add boric acid to the reactor coolant – or to the spent fuel rod cooling pools - the probability of fission is reduced.

World production of borates remains mostly concentrated in the US and Turkey – these two countries account for 75% of supply.

Chinese boron - both in terms of quantity and grade - is inadequate to meet domestic demand so the country is now the largest importer of both natural borates and boric acid.
Conclusion
Potash and agriculture will be one of the top investment themes over the next 20 to 30 years - world population growth and three billion people climbing the protein ladder are elephants in the dining room. Our population has nearly doubled since 1970. We add 80 million people to our global population each year - tonight, there will be 220,000 new mouths to feed at the dinner table.
The rechargeable power needs of our modern society has made lithium a serious player in the commodity markets. Lithium makes an excellent battery for use in a wide range of applications - batteries using lithium have been found to have a high energy to weight ratio, can be moulded into amazing shapes and have longer lives than conventional batteries.
And when used as a rechargeable battery there is no memory effect.
There are significant savings to be had in the pricing of lithium from brines for lithium miners with quality projects close to all necessary infrastructure.
Investing in a macro trend has always been the most dependable way to make money - rising food prices are a macro trend with a long term time horizon, so is the electrification of our transportation system.
Are both these global macro trends on your radar screen?
If not, maybe they should be.
Richard (Rick) Mills
rick@aheadoftheherd.com
www.aheadoftheherd.com

If you're interested in learning more about the junior resource, bio-tech and technology sectors please come and visit us at aheadoftheherd.com

Site membership, and our AOTH newsletter, are free. No credit card or personal information is asked for.

This document is not and should not be construed as an offer to sell or the solicitation of an offer to purchase or subscribe for any investment. Richard Mills has based this document on information obtained from sources he believes to be reliable but which has not been independently verified; Richard Mills makes no guarantee, representation or warranty and accepts no responsibility or liability as to its accuracy or completeness. Expressions of opinion are those of Richard Mills only and are subject to change without notice. Richard Mills assumes no warranty, liability or guarantee for the current relevance, correctness or completeness of any information provided within this Report and will not be held liable for the consequence of reliance upon any opinion or statement contained herein or any omission. Furthermore, I, Richard Mills, assume no liability for any direct or indirect loss or damage or, in particular, for lost profit, which you may incur as a result of the use and existence of the information provided within this Report.
For site advertising rates contact: rick@aheadoftheherd.com

Richard Mills does not own shares of any companies mentioned in this report.
Related articles