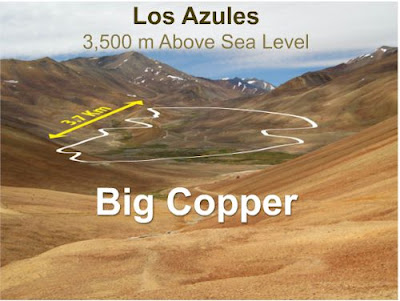 We have an interesting article on Minera Andes and its potential valuation with ongoing preparations for the merger with US Gold. OTC Equity reports on the challengers and potential value drivers for the Rob McEwen's  major Gold, Silver and Copper play. We call it "major", because he is going to put his name on the combined company. It is very encouraging that authors did a very good homework and report some analysis of the litigation situation between Minera Andes and TNR Gold on the property rights surrounding "Big Copper in Argentina" - Los Azules project. 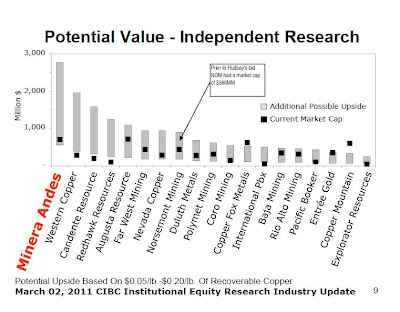 As you remember, we are covering this story for years and think that all shareholders deserve to receive the all publicly available information on the ongoing litigation. They are smart enough to make their own opinion about the validity of any legal claims and the potential reasons about why Minera Andes shareholders are not getting the proper value by the market for this company and/or any competing bids so far. We are still of the opinion, that more proactive and open minded business approach from the Minera Andes in the past could led to the resolution of this litigation and was in the interest of all parties involved. Now company has moved from the total denial phase into the damage control mode and Rob McEwen's team has acknowledged at the recent AGM the existing risks in this litigation and that it is necessary to clear the Los Azules property title. We do not think that Mr McEwen was personally paying a proper attention to this issue before - with his stellar business reputation he could easily find the fare solution with the junior partner and unlock the proper market value of this promising project for Minera Andes - and  the lawyers involved are driving the show and they have managed to increased the stakes involved in this game.
You can listen to the Minera Andes AGM web cast in order to receive the first hand information about the huge potential of the Los Azules Copper project, its high leverage to the copper price and general economic assessments.
TNR Gold side of the story can be found here.
"Los Azules: Video: TNR Gold litigation at Minera Andes AGM. We would like to share today the link below to the Minera Andes AGM webcast - you can see the description of the Los Azules Copper deposit by Minera Andes, proposal about Merger between Minera Andes and US Gold and the only questions asked at the AGM concerning TNR Gold litigation.
http://www.meetview.com/minera20110711/
Below is the TNR Gold side of the story:
TNR Gold (Solitario) properties are called Xstrata on the map below and above that line. 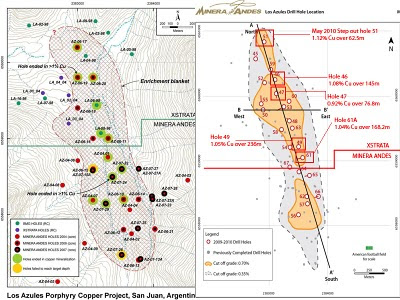 Below is the position of Escorpio IV with planed mining facilities on its surface: 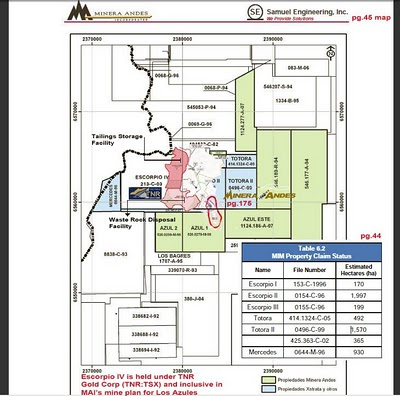 We have found the following comments from Minera Andes the most interesting: More."