Interesting time comes for the Copper plays. Commodities are so much hated asset class now, that the move could be very unexpected for many people, when rotation starts from overpriced equity markets into the real assets plays. 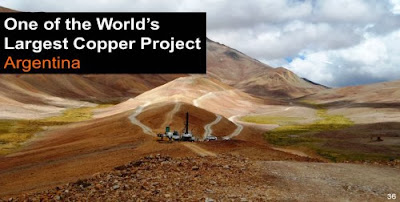 "It looks like the shift in Argentina for the better is happening for real this time. Rob McEwen has discussed it in his recent presentation and that in his opinion "we have seen the low in Argentina after a lot of disappointment". Shevron special Shale Oil deal, repayment to Repsol and now Yamana Gold investment are certainly the things we would like to see now after elections. Lumina copper is holding above CAD5.00 these days and McEwen Mining and TNR Gold should benefit from Los Azules copper revised valuation now."

* One investor held over 90 pct of copper contracts

By Eric Onstad and Josephine Mason

LONDON/NEW YORK, Dec 20 (Reuters) - Someone has made a near billion-dollar bet on copper this week, virtually cornering the world's key stocks of the metal.

That has stoked worries of a supply squeeze, as warehouses run low on a raw material vital to global industry, and has raised questions about commodity exchanges' efforts to curb attempts to manipulate prices by aggressively heavy trading.

on Friday showed that a single participant was holding 50-80 percent of available copper stocks on the LME, which handles the bulk of trade in the metal. The position was nominally worth up to $753 million.

Earlier in the week, one investor - presumably the same - had held over 90 percent of short-term trading instruments on LME copper - a position worth at least $862 million on paper. Traders have no clear idea who is behind it.

The firm doing the buying would not have had to put up all the cash up front and may well have had hedging positions and real requirements for physical copper. But it appears nonetheless to be a substantial gamble on prices rising.

And since the very fact of building up such a dominant position fuels fears of scarcity, it was little surprise that prices did in fact increase - LME cash copper gained 5 percent through December as the long position grew, hitting a four-month high on Monday before shedding about 1 percent.

That link between an aggressive, large buyer and fears of supply shortages driving prices higher is one that exchanges, including the LME, have historically tried to contain.

But the LME, under scrutiny from government regulators, said it has no plans to cap the size of investors' positions - though it does have other mechanisms to thwart manipulation.

"The LME has a robust position management system in place to deal with dominant positions," said spokeswoman Miriam Heywood, adding there was no plan to change those rules.

The world's oldest metals marketplace has already been overhauling practices on warehousing - its system of ensuring physical stocks exist to back trades concluded on the exchange.

It has done so in response to allegations of manipulation in its larger aluminium market, which industrialists say has distorted global supply and inflated prices.

With its copper stocks shrinking, the impact of any future squeeze could be more severe than what happened this week, said analysts, who noted a 19-month high in the key price spread between copper for immediate delivery and that for future delivery - a measure of fears that ready supply may run short.

"The tightness is there. It's bubbling underneath," said Wiktor Bielski, head of commoditiesresearch at VTB Capital.

"There are just a lot of things that could all of sudden turn quite nasty for anybody who needs spot copper and doesn't have any cover."

The low stocks combined with an outage at a smelter in the Philippines, Chinese demand that has been running more strongly than expected and concern about Indonesia's plans to boost its own industry by banning the export of unprocessed ore could all contribute to a volatile mix.

Among those potentially hardest hit by a spike in prices are the numerous speculators who have taken short positions on the LME - selling copper for future delivery in the hope of buying it more cheaply later, before the contracts fall due.

They were betting that the copper market would move into surplus as new mines churn out more supply. But backlogs in processing the ore have limited the amount of refined metal being produced and prices have failed to fall significantly.

"I don't see this situation abating," said one trader. "There's really no copper around at the moment."

The crunch may come in the new year, said analyst Leon Westgate at Standard Bank in London: "It looks like in the early part of next year there's going to be a bit of a battle on the cards in copper," he said.

Copper stocks in LME-registered warehouses MCUSTX-TOTAL have declined by 44 percent since June to 382,550 tonnes. Moreover, much of that has already been earmarked for delivery or is located at warehouses suffering from delivery backlogs.

Two thirds of the total copper stock has been "cancelled" in preparation to be shipped out to buyers.

Most of the rest is in three warehouses - at New Orleans, Antwerp and Johor in Malaysia - where queues for other metals makes in hard to secure their copper for rapid delivery.

Bielski said that, of the nearly 400,000 tonnes in official LME stocks, only about 16,000 were actually available now.

The owner of Grasberg in Indonesia, the world's second largest copper mine, warned this month that output could slide 60 percent next year if the government strictly implements a planned ban on unprocessed ore exports.

That could tempt speculative buying, Bielski said: "Someone, somewhere is going to see this as an opportunity in the next couple of months."

In the United States, the commodities derivatives regulator has stepped up its efforts to limit speculation, proposing a cap on the number of contracts that a single trader can hold in U.S. energy, metal and agricultural markets.

The LME does not intend to follow. It already has rules to limit the profit a speculator can make by scooping up so much supply on any day that traders with short positions are unable to cover them at the close. Any party holding a position worth over half of LME available stocks must supply metal to short-position holders at very modest price premiums.

The copper market, trading an annual output of about 20 million tonnes, is smaller than aluminium, theoretically making it easier to squeeze. In a scandal in the 1990s, a Japanese trader was jailed for trying to corner the market in the metal in a gamble that cost his employers over $2 billion.

American billionaires the Hunt brothers also lost heavily when an attempt to drive up the price of silver collapsed in 1980 after a change in exchange rules to curb manipulation.

On the LME last week, as short holders scrambled to cover, the benchmark cash to three-month spread CMCU0-3 flipped into backwardation - meaning copper for immediate delivery is more expensive that later-dated contracts. The premium surged to $30 per tonne on Monday, the highest since May 2012.

That is a $46 turnaround from last month, when the market was in contango, with cash copper $16 a tonne cheaper than metal for delivery in three months.

While benchmark LME copper prices also surged this week and may see further volatility, the greatest impact of any future squeeze could be a strong backwardation, analysts said.

Westgate said his research showed that there was strong potential for further spikes in spreads since historically when available copper stocks declined to levels of around 130,000 tonnes, spreads are more volatile and can trade anywhere from a $50 contango to a $250 backwardation. (Writing by Eric Onstad; Editing by Alastair Macdonald)"