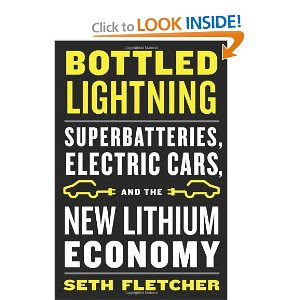 Seth Fletcher brings a very important point across - Electric Cars at this stage are all about the choice. Finally, you can have some choice at least with your own mobility. You can plug in and use Domestically produced relatively cheap electricity and support Solar, Wind and other forms of Green Energy at your choice of supplier. And now you know what happens If You Can't Plug Your Car In. More and more people are getting it and the recent hatred campaign against electric cars only confirms the trend. Gas prices are talking for themselves now. Saudi Oil is lost in translation if US and UK are pushed to open Strategic Reserves again and sell cheaper Oil to the happy Chinese buyers.

Once technology improves, we will have the Switch - when consumers will be switching to the electric cars and create mass market. Demand is already there - we need just to have electric cars which will be better than ICE ones. "iPhone moment"for electric cars will come with the better range and low cost as promised by recent announcements about advance of Lithium Battery Technology and new marketing approach, when Lithium Battery is leased rather that sold with electric car. You will pay monthly fees for the lithium battery lease and all the trouble with warranty will be gone - you can exchange or upgrade your battery. In case of Renault ZE payments are promised to be in line with ICE cars: cars are priced as their "normal" ICE comparable models and your electricity and lease payments per month will be the same as for the Gas at this level, but with rising Gas prices you will get some additional gain.

It is always very important to remember that at some point in the Gas prices you will be happy to drive Anything or, like in case of China, you are not allowed to buy any, but only electric car in Beijing now - unless you have won the plate lottery.

"With 2011 coming to its end we would like to share these days major events from this year which will be defining our future. This future will be uncertain and unknown, but we can grasp the major trends already. It will be about the Energy Transition. This transition is not something that we just would like to do, but it is the only way to survive - it is what we have to do. We still can try and reverse the inevitable economic collapse and stop the Power Transition and biggest Wealth Transition in the mankind history."

The transition from novelty to normality

Early this year, when it became clear that the Chevrolet Volt and Nissan Leaf had missed their 2011 sales targets, critics declared the electric-car revolution over. Yet at Detroit's annual North American International Auto Show in January, plug-in cars abounded. BMW displayed its forthcoming i3 electric city car, along with its i8 plug-in hybrid sports car. Acura unwrapped a hybrid concept version of the NSX supercar. Tesla Motors brought its all-electric Model S sedan. But the most important car on the show floor might have been one that, on the surface, seemed much less exciting: the new Ford Fusion, which will be available in gasoline, hybrid and plug-in hybrid versions.

Carmakers long refused to build plug-in cars because they said they had no idea how many people would buy them. Then, rising oil prices and environmental concerns led governments to enact stricter emissions standards and push carmakers to build cars that could meet those standards. In the U.S., the federal government lent several carmakers (not just GM and Chrysler) money to develop electric vehicles and retool factories.

Ford used part of its $5.9-billion loan to develop a system for building gas cars, hybrids, plug-ins and electric cars all on the same line. In a renovated Detroit-area factory, it will build gas and electric versions of the Focus compact car, along with hybrid and plug-in hybrid C-Max minivans. The company will use the same strategy for the Fusion.

Compared with the ambitious e-car launches of recent years-particularly those of the Chevy Volt and the Nissan Leaf-Ford's approach might appear noncommittal. But it could turn out to be transformative. It's evidence that once the investments have been made, manufacturing electric cars isn't all that hard. It's a matter of adding a few assembly-line stations where plug-in cars get their batteries, electric motors and electronic controls. And when Ford and other automakers use the same lithium-ion batteries across a range of electrified vehicles, it will help reduce the cost of those batteries, pushing electric-vehicle sticker prices down and ultimately in line with conventional gas cars.

Drivers won't just benefit from lower prices; they will finally get some choice. Picking a power train could eventually become as simple as opting for the premium sound-system package. And making that choice won't have to be a lifestyle statement. Outwardly, the plug-in hybrid version of the Ford Fusion will be almost indistinguishable from the hybrid or conventional versions, with the exception of a charge-port door and a little badge that says "Energi." Habituating Americans to the concept of plugging in should make it more likely that all manner of electrified cars receive a warm reception.

The debut of the Volt and the Leaf was just one phase of a long process. First came the high-profile launches and the saturation media coverage. Now it's time for plug-in cars to slowly become normal, even boring-or, to put it another way, accepted."