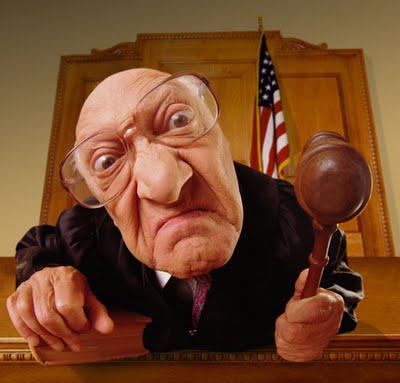 Note: we are not sure that this particular Judge will be involved in this court hearing.

Disclaimer (loosely based on investment bankers' small print): please read our full disclaimer, nothing on this website or any links provided should be relied upon in any way and nobody will accept any responsibility in any case.

We guess, that at some stage Mr Allen Ambrose - former CEO of Minera Andes, will be questioned during the Los Azules litigation on what exactly were his intentions explained in his emails presented by TNR Gold litigation counsel in Amended Claim.

24. "Next we should look at our alternatives to take out the Solitario (TNR Gold - S) agreement..."TNR Gold vs Minera Andes (McEwen Mining now) and MIM (Xstrata now). From Page 11 Part 3: Legal Basis http://bit.ly/xhdqag

"The Los Azules copper project is subject to ongoing legal proceedings with the potential that we may lose all or part of our interest in the project. 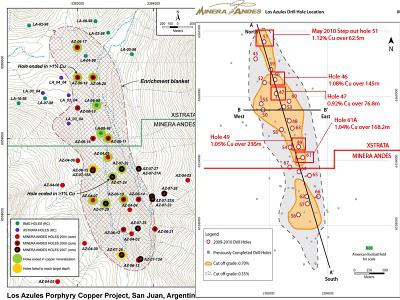 Los Azules Copper Project, Argentina
During the first quarter of 2012, drilling at the project was slow due to difficult ground conditions and equipment problems. A total of 2,835 meters was drilled during the field season which ran from early January to late April and fell short of the 8,000 meters that was originally planned. Most of the drill holes started were unable to reach their target depth. We expect to report assay results from the drilling during the second quarter of 2012 and provide an updated resource estimate for the project by June 30, 2012.
In order to solve the problems encountered with the recent drilling at Los Azules, we signed a contract with a drilling company to provide us four core drills considerably more powerful than the ones used this season. We anticipate starting the upcoming drill season in October 2012, weather permitting.

The Los Azules properties are located in the high Andes within the San Juan region of Argentina. Minera Andes, a wholly-owned subsidiary of McEwen Mining, has held exploration and mineral exploitation rights to properties in the Los Azules region (the ''Minera Andes Properties'') since the late 1990s. In the early 2000s, the exploration and exploitation rights to the properties north of the Minera Andes Properties (the ''Solitario Properties'') were held by Solitario, a wholly-owned subsidiary of TNR Gold, a junior mining company based in Vancouver, British Columbia, Canada.
The Los Azules litigation was commenced in the Supreme Court of British Columbia, Canada as follows:
a) TNR Gold Corp. and Solitario Argentina S.A. [Plaintiffs] v. MIM Argentina Exploraciones S.A., Minera Andes Inc., Minera Andes S.A., Los Azules Mining Inc. and Andes Corporacion Minera S.A. [Defendants] (Court File No. S-084670, Vancouver Registry) initiated June 30, 2008. Minera Andes was joined as a Defendant in this proceeding in September 2010, consolidated in April 2012 with Minera Andes S.A., Minera Andes Inc., Los Azules Mining Inc. and Andes Corporacion Minera S.A. [Plaintiffs] v. TNR Gold Corporacion and Solitario Argentina S.A. [Defendants] (Court File No. VLC-S-S-102992) initiated April 1, 2010.
While the proceedings were commenced separately, these proceedings have been consolidated, and the pleadings amended, so that all issues will be heard together under a newly assigned case management judge anticipated to be in November 2012. The following is a non-exhaustive summary of the claims made by the plaintiffs in respect of these actions.
There are essentially four issues raised by the Los Azules litigation which can be generally described as follows:
a) The Expenditure Requirement Issue. Whether or not Xstrata Copper made the development expenditures required for the proper exercise of the option agreement between Xstrata and Solitario (the ''Xstrata-Solitario Option Agreement''), whether or not Minera Andes or its subsidiaries engaged in intentional interference with

Solitario; and
& Damages against Minera Andes for breach of contract and intentional interference with Solitario's economic relations.
& Back-In Claim. TNR amended its claim in August 2008 to assert that the above back-in right is not subject to the 36-month timeline that appears in the executed Xstrata-Solitario Option Agreement. In fact, TNR claims the 36-month limit was never the commercial intention of the parties as the 36-month limit was not included in the original letter of understanding between the parties which was subsequently superseded by the formal Xstrata-Solitario Option Agreement. In particular, TNR claims that the 36-month requirement was added by Xstrata, overlooked by TNR (and its lawyers) and not discovered until November 2007, all while Xstrata made payments on their option. As part of this claim, TNR seeks:
& rectification of the Xstrata-Solitario Option Agreement to make the back-in right accord with the letter of understanding; a declaration that such rectification is enforceable as against Minera Andes;
& a declaration that the 36-month restriction is unenforceable for want of consideration;
& damages for breach of the implied term that Xstrata, and later Minera Andes, would exercise best-efforts to complete a feasibility study within 36 months of Xstrata exercising its option; and
& a declaration that Solitario is entitled to waive completion of a feasibility study and that its April 23, 2010 back-in notice is valid and enforceable.
& Waiver Claim. In addition, on April 23, 2010, Solitario delivered notice of exercise of the back-in right and waiver of the condition of the completion of the feasibility study and claimed that it had the right to back-in to the Solitario Properties prior to the expiry of the option period on the basis that they could waive the requirement that a feasibility study be completed.
& Escorpio IV Claim. TNR filed a claim on June 30, 2008 in relation to the ongoing unresolved claim against Xstrata as to whether or not Escorpio IV is included in the properties subject to the Xstrata-Solitario Option Agreement. Minera Andes has publicly disclosed that the current resource estimates for the Los Azules project are not located on Escorpio IV, and that the current intention is to locate certain mine infrastructure on Escorpio IV. Minera Andes is currently entitled to the surface rights in respect of Escorpio IV. TNR is of the position that Escorpio IV is not part of the Xstrata-Solitario Option Agreement and that it has retained ownership of this claim.
If TNR is successful in any of its claims against Minera Andes, this could have a significant and material negative impact on the ability of McEwen Mining to further develop the value of the Los Azules Project.