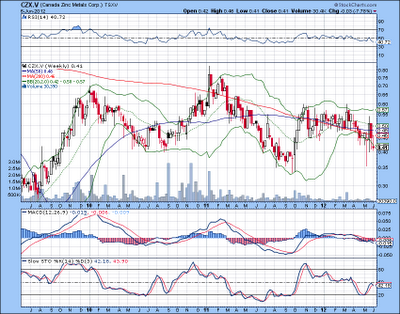 With announced today China Central Bank's Rate Cut - it is time to revisit what actually Chinese companies are buying now in the resource sector.

"Canada Zinc Metals has seen some activity last couple of days - Bob Moriarty thinks that it is cheap now. We can not argue here - all juniors have been beaten into the dust lately, but not all of them will rise again. You need solid projects and team, which is able to develop them. Tongling Nonferrous from China with 36% in Canada Zinc Metals and Lundin Mining are good company to navigate the recent market.

Interestingly enough, the company has renewed its "poison pill" plan couple of weeks ago."

In our big picture view, when Energy Transition will be the major driver for the next phase of the economic development, Copper and Zinc will play a very important role as well.

"Electric Cars produce the one life time opportunity for China now - do not get us wrong, not everything is driven by the ancient wisdom of "The Art Of War", but just look at what people are doing and not what they are talking about. It is the most apparent situation in the strategic commodities markets - Rare Earths are already controlled by China, Graphite is under the siege and Lithium is the next frontier. Despite all noise in the media, China is steadily implementing its 12th Five Year Plan - to build the new strategic industry based on Electric Cars."

"Highlights of the updated mineral resource are as follows:

"Canada Zinc Metals has come out with another great exploration results, deposit has all chances to grow further. Stock was moving Up strongly from the recent lows couple of months ago fueled by this drill program expectations and constant rumours about Chinese consolidation. Chinese giant Tongling Nonferrous holds 36% in the company and the only question left is when they will move to increase their stake. Lundin Mining keeps all its options open with the strategic stake in the company - these two companies can easily make this Canadian region play into one of the largest Zinc and Lead mines in the world. We can talk about the magnitude of 100 million tons Zinc and Lead above 5% grade combined after consolidating the Korea Zinc and Teck Resources J/V property in the region.

In our small interconnected world Canada Zinc Metals holds strategic stake in TNR Gold with its Lithium, Rare Earths and, now - Iron Ore projects. The most intriguing part is Los Azules litigation TNR Gold vs Minera Andes with more than Half of this "Big Copper deposit in Argentina" at stake now. One day, after Canada Zinc Metals acquisition, Chinese Tongling can be knocking together with TNR Gold on the Minera Andes and US Gold door after their merger."

After aluminum and copper, zinc is the mostly used nonferrous metal in the world thanks to its capacity to protect ferrous metals against corrosion/rusting. Hence, the "infrastructure metal" zinc is mainly used galvanizing/coating iron and steel products, such as vehicles, buildings, bridges, railways and other structures.

"Although many elements can be used as a substitute for zinc in chemical, electronic, and pigment applications, the demand for zinc galvanized products remains strong, especially in regions where significant infrastructure projects are being developed. The dramatic increase in the world's production (supply) and consumption (demand) of zinc in the past 35 years reflects demand in the transportation and communications sectors for such things as automobile bodies, highway barriers, and galvanized iron structures." (1)

If the global economic recovery progresses in the next years, demand for zinc will increase accordingly. However, even if global economics will worsen in the future, demand for zinc is set to be strong due to massive infrastructure projects in industrialized and emerging countries being executed no matter what. Additionally, natural disasters such as earthquakes or tsunamis require reconstruction activities that can have the magnitude of changing demand significantly.

The OECD estimates a yearly investment requirement for worldwide infrastructure projects in the area of $600 billion for the next 20 years - only to guarantee the provision of water. Additionally, the OECD expects China to spend some $2 trillion until 2030 for infrastructure only to produce and distribute energy. And such cost-intensive infrastructure developments are not only limited to undeveloped countries. As per the OECD, the USA and Canada must invest around $1.8 trillion in electricity facilities, which is almost as much as China. "The Government of India plans to investover $1 trillion over the next five years to meet the country's huge infrastructure demands. Over 50% of these funds will come from the private sector." Any development of infrastructure is highly zinc intensive. 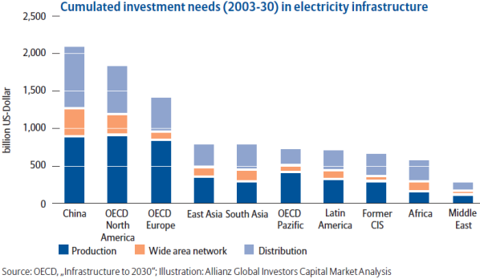 The urban development trend, especially in undeveloped countries, is set to additionally escalate the demand dynamics for zinc. New markets and industries, as well as emerging countries, foremost demand buildings, structures and transportation routes, such as streets, rails, waterways and airports, besides all kinds of new facilities that, for example, provide the supply of water and electricity.

Urbanization is people increasingly leaving rural and undeveloped regions to move into cities. In cities, the per capita consumption of zinc is significantly higher than in the countryside. Calculations forecast that in 2050, some 6.5 billion people will live in cities - today it is only 3.5 billion. These 3 billion new people, or 86% more than today, represent on average 1.5 million people more per week living in cities. The enlargement of all cities in the world until 2050 is expected to equal the combined areas of Germany, France and Spain.

The zinc price is set to escalate over the next years not only because of sound demand dynamics on a global scale, but additionally due to a looming chronic shortage of supply. The coincidental closure of large zinc mines (e.g. Brunswick, Century, Lisheen, Skorpion) due to depletion coupled with only few new zinc mines being developed these days leads to a regressive supply. As we expect demand to remain strong over the next decades (no matter if global economics recover or not) and supply to be in a slump, we anticipate much higher zinc prices, especially when considering that zinc today sells for around the same price as in the late 1980s and early 1990s. 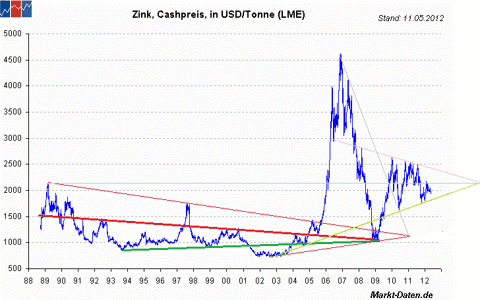 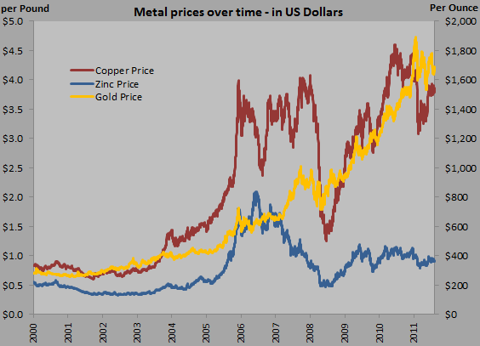 More than 50 countries around the world mine zinc ore, with Australia, Canada, China, Peru and the USA being the largest producers. About 80% of the world's zinc is mined underground, while 8% is mined via open pits with the rest using a combination of both methods. (2) 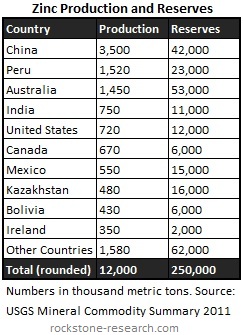 The following graph shows the change in supply and demand since 2000 with estimations by Brook Hunt for 2012-2017. It is estimated that demand will grow 2-3% per year, especially in industries such as construction, automotive and transport due to zinc`s long useful life-cycle. In the years 2013-2014, demand is expected to exceed supply and a chronic deficit to arise. 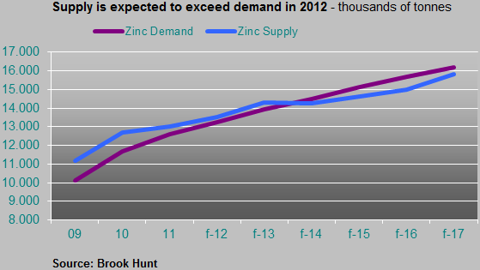 "Zinc may represent the next big base metal play. Zinc will shift into 'deficit' (at latest by 2014) due to ongoing demand growth in the face of significant global mine depletion in mid-decade. In 2013, the closure of the Brunswick mine in Canada, Century in Australia and Vedanta's Lisheen mine in Ireland will shift sentiment towards zinc, with prices rallying in anticipation of tightening supplies. In the second half of this decade, zinc demand will be boosted by a recovery in G7 construction activity, particularly in the USA." Scotia Bank (Toronto, Canada; March 2012)

"Zinc has the most promising fundamental outlook among the metals… The zinc price is expected to be rangebound for the most part of this year before starting its ascent towards the end of 2012 in anticipation of a tight market. Brook Hunt expects the zinc price to average US$1.24/lb in 2014 and steadily climb thereafter, possibly challenging the previous high of US$2.08/lb that was reached in late 2006." Brook Hunt (Wood Mackenzie; April 2012)

Similar comments about the upcoming shortage of supply and zinc inventories being drawn down below critical levels have been made by Credit Suisse, RBC Capital Markets and Goldman Sachs. Salman Partners (Vancouver, Canada; April 2012) advise how investors may profit from the imminent shortage of zinc and list Canada Zinc Metals Corp. (TSX: CZX) as one of the few alternatives for the development of zinc resources. Recently, Salman Partners commented:

"We believe that, beginning next year, the world faces an increasing shortage of zinc mines. The opening up of the Akie district could help Canada make an important contribution to alleviating such a shortage."

The development of the Akie zinc-lead-silver district in north-east British Columbia is actively supported by the Canadian government, whereas BC`s largest hydroelectric power source is located 160 km south-east. The 125 square kilometer Akie district is 100% owned by Canada Zinc Metals Corp. 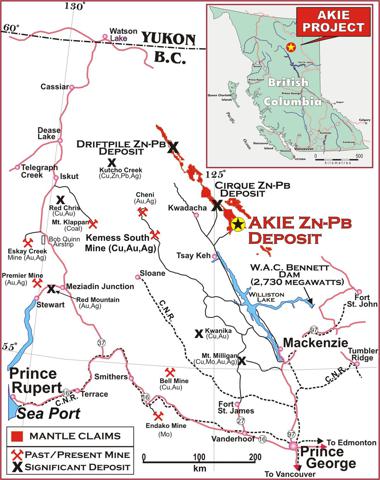 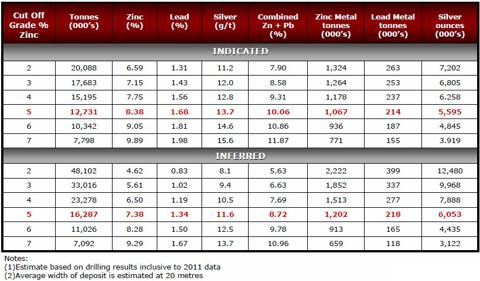 Akie is one of the largest undeveloped zinc-lead deposits in the world and is attracting the interest of several investors such as Tongling Nonferrous Metals Group Holdings from Peking (a Chinese state-owned enterprise) and Lundin Mining - both companies are among the largest shareholders of CZX (likely to be the reason why the stock performed much better than most other resource stocks during the last months of a broad market correction).

Infrastructure in the Akie area is already relatively advanced, whereas CZX is well funded with $15 million in working capital - yet market values CZX with solely $60 million at the moment. An extensive exploration and development program is being planned and includes underground development and drilling to move towards completion of feasibility level studies. 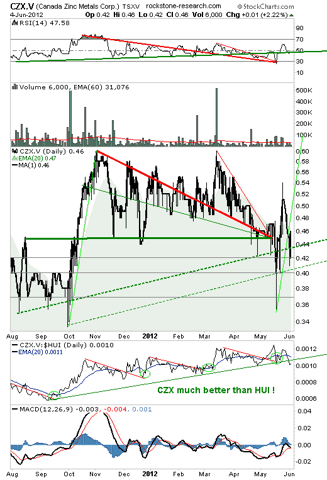 Technically, the stock price has been consolidating sideways within the red-green triangle since November 2011, whereas the apex of the triangle was reached in May 2012. After short "fake breakouts" to the downside, the price managed to start thrusting to the upside recently, yet again another pullback to the apex at approximately $0.45 occurred most recently. Thus, a buy-signal à la thrust to the upside is active when trading above the $0.45 level, whereas a sell-signal à la thrust to downside is generated below that apex level. Relatively to the HUI gold mining index, CZX has been performing much better since September 2011, especially after rising above the red resistances. The above chart can be followed with daily price updates with the following link:http://scharts.co/IS2425

Please, do not forget, that we own stocks we are writing about and have position in these companies. We are not providing any investment advise on this blog and there is no solicitation to buy or sell any particular company here. Always consult with your qualified financial adviser before making any investment decisions