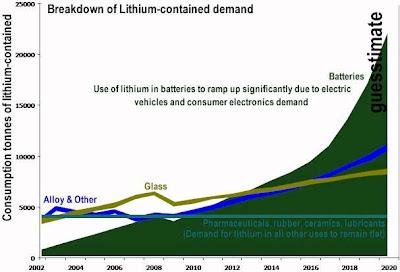 We have one more article on Lithium Demand - this time from respected mining source - Mineweb. You will have more information to draw your own conclusions as always.

"Now CNBC is joing the Bloomberg and Barron's with our Next Big Thing - Electric Cars and strategic commdities to make it happen - Lithium, REE and Graphite. Big players must have been already positioned themselves at the Sector Low and waiting for the general public to wake up with Tesla Model S in the headlines. You still have the luxury of building your own collection with Lithium Juniors, which are in a depressed state of the mind today." 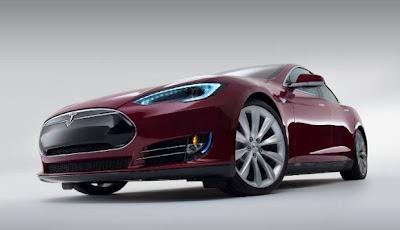 Lithium Catalyst: Tesla CEO Elon Musk: Half Of New Cars Will Be Electric In 15-20 Years!

Thing story is coming back on mainstream investors' radar screens."

"There are a lot of bargains now among Lithium developers after the recent scare in Argentina. Catalyst will come with clear picture from Argentina, Risk On Trade, rise in M&A activity and Tesla Model S, which will start to be delivered to public in the next couple of days." 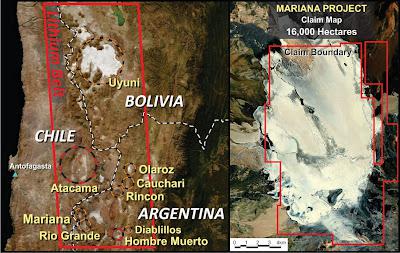 Lithium and Potash Brine production from Salars in South America

Economist Daniela Desormeaux* has plotted some important points in lithium's demand timeline and explains why small-cap lithium producers will have room to compete with the big boys. Energy Report interview.

The Energy Report: The fourth annual Lithium Supply & Markets Conference in Argentina took place at the end of January. What was the mood at that time?

Daniela Desormeaux: At that time, people were thinking about how the situation in Europe would impact the industry. I think we have more information about that now, but in January we did not. Regardless, the main drivers behind lithium demand are relatively independent of the economic cycle, and what we see is demand continuing to grow at a healthy rate despite the current situation in Europe. People in the industry know that the main driver of lithium demand is batteries. In the short-term, the economic cycle obviously affects the lithium industry, but from a long-term view I think expectations remain optimistic.

TER: We saw some lithium price increases in mid-June of 2011. Will prices continue stronger, or will they stabilize?

DD: Well, lithium pricing is very interesting to follow because it's not just about the balance between demand and supply; it's determined by what the main lower-cost producers decide to do with prices, which then impacts the rest of the industry. That's the pattern we have seen in the past.

It's important to distinguish between nominal prices and real prices, inflation being another source of price pressure. But short-term prices may be stronger because of inflation and these new investments. Prices should remain stable in the mid- to long-term because even as demand is growing, new production is coming into the market. This will help balance the market.

TER: When it comes to pricing individual lithium products, are grade and purity the most important factors?

TER: A recent article in Bloomberg Businessweek, "IPad Boom Straubs Lithium Supplies After Prices Triple," was a very positive story, and it moved the market on small-cap lithium stocks. Is this a sign that the lithium market is beginning to wake up?

DD: I think the industry has already awakened. We have seen a lot of global interest in lithium over the last five years. But my fear is that in some cases there is an overestimation of lithium demand. Lithium is going to be important now and more important in the future because of its use in batteries for electric cars among other things, but it won't replace oil.

TER: Could these overly robust demand expectation lead to a supply glut?

DD: In the past, the industry has overestimated demand, and that's why we saw something like 90 projects in the works at one point. But it's impossible for all of these projects to be part of the lithium supply because there is not enough demand in this space for everyone. Thus, most of these projects did not reach production.

TER: Nonetheless, demand is actually growing. The question is, at what pace?

DD: The lithium industry has a very promising future, and we think demand will grow at about 8% per year. But it's also important to have a very realistic perspective about the industry.

TER: Daniela, aren't component makers in transition now from nickel-metal hydride batteries to lithium-ion batteries? How significant is this shift?

TER: Are we back to pre-recession demand levels for lithium?

DD: I think this industry is really very interesting in that regard. Despite the recession, some expect the battery industry to grow 20% this year. By the end of the year I think that total demand will be higher than previous levels.

TER: Where are we now on the demand curve for lithium? At the foot? Near the peak?

DD: We are getting close to a breaking point. This will occur when electric cars become affordable for many consumers. We have seen this happen in some countries where there have been lots of subsidies, but it's difficult to believe that European governments will continue with these subsidies, given economic conditions. But the numbers could be amazing. For example, the iPhone contains something like 5 grams (5g) of lithium carbonate while a battery for a car can have 30 kilos (30kg) of lithium carbonate in it. The difference in the numbers is huge. I do think we are approaching a change in the growth trend-a breaking point.

TER: When will we hit that inflection point?

DD: That's a very good question. I think it will be after 2015. The situation in Europe will impact the uptake of electric cars. There are also some analysts who believe that China is slowing down as well. We'll have three or four years before we see a massive taking off of the lithium-ion battery industry. It may be sooner or later depending on the economic situation, of course, but I think we are approaching it.

TER: Can small-cap lithium companies compete with the large companies on scale and margin?

DD: I think the answer is yes, because so far what we have seen is the big three lower-cost producers are giving the space for newcomers to enter the market. Years ago, I did not think they would do that. I thought they would lower prices to where most of these new projects couldn't be profitable. For example, if the big three lowered prices to, say, $2,000 per metric ton, most of these new projects wouldn't be profitable. But they haven't done that. That's a signal that they are giving room to these newcomers to enter into the market because the demand is growing and the supply, so far, has not grown at the same rate. Smallcaps will have a chance, but of course they will have to compete against each other because room for new companies is limited. If too many come into the market, prices will start to go down, and that of course will impact those smaller companies. Ultimately, I think that the market will be balanced and the lowest-cost new producers will be part of the supply chain.

TER: Lithium equities' performance has been very weak over the past 16 months, even with this recent uptick in lithium prices. Why aren't we seeing more consolidation?

DD: This global economic situation has had an effect on almost all publicly listed companies. The lithium industry is especially sensitive to that. On the other hand, the economic situation is very much related to what has happened with oil prices, and the oil price is very important to the uptake of electric cars. It is very important to know how the industry works and what the main forces are. We see the main trends in the lithium industry pointing to a very promising future. For example, we have seen many new large-scale energy storage projects that use huge batteries. This will represent an important source of demand, as will electric bikes in China.

TER: Daniela, what do you tell investors who want to invest in lithium?

DD: You have to look at the battery industry, because it is going to be crucial. Today it represents 30% of total lithium demand and we estimate that in 10 more years, it will represent about 50% of the demand. So far, there aren't any substitutes for lithium in batteries. But who knows what will happen in the future. In any event, the lithium industry shows a very promising future, and among all of the commodities it represents one of the highest expected rates of growth.

DD: Thank you. I enjoyed it.