I am an internationally recognized market technical analyst and trader since 1997. My BAN (Best Asset Now) trading system beats the #SPX by 600%. Through www.TheTechnicalTraders.com/ my mission is to help clients boost their investment performance while reducing risk exposure and portfolio volatility. Through years of research, trading and helping thousands of individual traders and investors around the world I designed an automated algorithmic trading system indicators for the S&P 500 index which solves investor’s biggest problem related to the stock market - the ability to profit in both a rising and falling market. My focus is to educate individuals on how to swing-trade indexes, stocks, ETF's, precious metals, and energy.

In PART I of this report we talked about and showed you the charts of the Hang Seng and DAX index charts and what is likely to unfold. In today’s report here we touch on the US markets. As we've suggested within our earlier research posts this year, US election cycles tend to prompt massive price rotations when the election cycles are intense. For example, the 2000 election of George W. Bush prompted a very mild price rotation in 1999~2000. This was likely because the transition from Clinton to Bush II was not overly contentious. The 2008 election of Barrack Obama was a moderately contested election cycle and happened at the time of the biggest credit market collapse in modern history – thus, the markets were well on their way lower 12+ months before the elections. The 2012 election cycle showed moderate price rotation as it was a highly contested election event in the US. The 2015-16 election event was highly contested as well and the price rotation near this time appears longer and deeper than the 2012 event.

Now, in 2020, we have one of the biggest, most highly contested US election cycles in recent history unfolding and we have already begun to see a price range /rotation over the past 12+ months that suggests we could see even bigger price rotation. If we add into this mix the US/China trade issues, global market concerns, US political rhetoric, and other issues, we have a recipe for A BIG MOVE setting up. 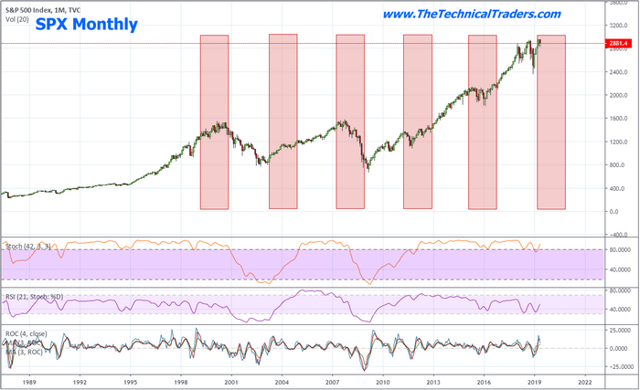 Our analysis still suggests that we are poised for an attempt at fresh new all-time highs before any massive price rotation takes place (near the upper trend line). Yet, we believe the downside price rotation is an eventual component of the next 16+ months of the US election cycle and the future price advance that should take place in the near future. In other words, we believe the markets are setting up for a bigger shake-out throughout this election cycle/trade issue event that will prompt lower prices before the end of 2019. We do believe the markets will settle and resume an upward trend bias after this downside price rotation – yet we don't know exactly when that will happen. 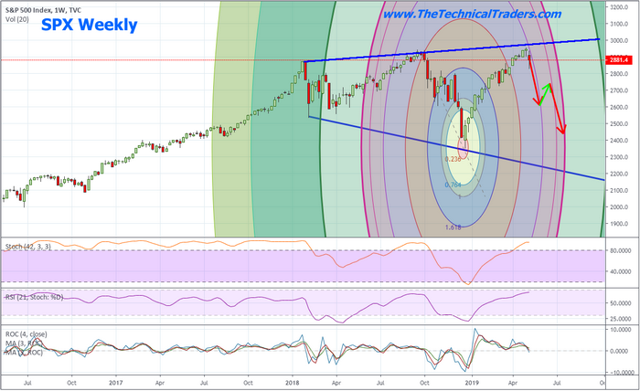 To the best of our ability to predict the future, we can state this at the moment. It appears the end of 2019 will be filled with large price rotation – likely to the downside as trade issues and election/political issues cause a “shock-wave” in the markets. We believe early 2020 will see a relief rally that may setup a bigger price move throughout the remainder of 2020. Right now, traders need to be prepared for an incredible increase in volatility and price rotation. It is very likely that we will see a VIX level above 40 at some point before the end of 2019. This is a time for skilled traders to get in, get profits and get out. Position trading over the next 12+ months will be very difficult.

For active swing traders, you are going to love our daily trading analysis. On May 1st we talked about the old saying goes, “Sell in May and Go Away!” and that is exactly what is happening now right on queue. In fact, we closed out our SDS position on Thursday for a quick 3.9% profit and our other new trade started Thursday is up 18% already.

Second, my birthday is only three days away and I think its time I open the doors for a once a year opportunity for everyone to get a gift that could have some considerable value in the future.

Right now I am going to give away and shipping out silver rounds to anyone who buys a 1-year, or 2-year subscription to my Wealth Trading Newsletter. I only have 5 left as they are going fast so be sure to upgrade your membership to a longer-term subscription or if you are new, join one of these two plans, and you will receive: 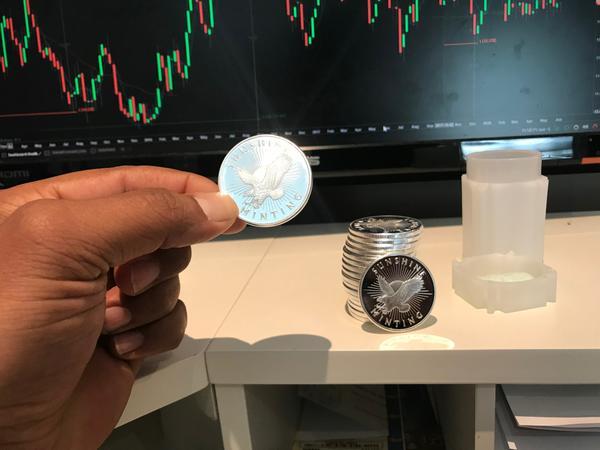 I only have 5 more silver rounds I’m giving away​​​​​​​so upgrade or join now before its too late!

SUBSCRIBE TO MY TRADE ALERTS AND GET YOUR FREE SILVER ROUNDS!