I am an internationally recognized market technical analyst and trader since 1997. My BAN (Best Asset Now) trading system beats the #SPX by 600%. Through www.TheTechnicalTraders.com/ my mission is to help clients boost their investment performance while reducing risk exposure and portfolio volatility. Through years of research, trading and helping thousands of individual traders and investors around the world I designed an automated algorithmic trading system indicators for the S&P 500 index which solves investor’s biggest problem related to the stock market - the ability to profit in both a rising and falling market. My focus is to educate individuals on how to swing-trade indexes, stocks, ETF's, precious metals, and energy.

After making new highs about a year ago we have seen Silver and Gold consolidate for roughly the last twelve months. Technically, it would typically be a bullish scenario with gold from the stand point that the last 12 months' price action was a sideways consolidation in a bullish pennant formation. However over the last year we have witnessed a series of lower highs and increasingly tested supports levels around $150 on GLD which raises caution. 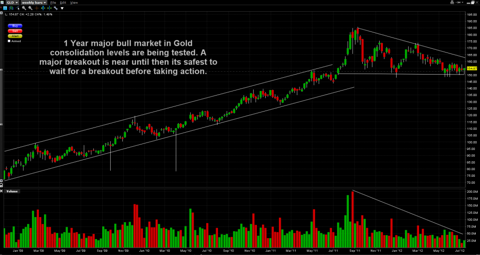 With the fed pulling any extensions on further quantitative easing in the form of QE3 or other programs, the bullish case has lately been criticised. However I am still a firm believer that gold in most respects is a currency, and the only one that can maintain its value. There are very serious issues looming in Europe and across the world that are far from resolution. With few tools left in the toolbox to stimulate world economies, further easing can never be ruled out.

Silver, after breaking through strong resistance around $19- $20 in September 2011 went almost parabolic in spring 2011 prior to giving up most of its gains in the last year. There seems to be significant support around $26 on SLV, however this level has been tested quite frequently over recent months and this again raises caution. While silver owes some of its moves to its industrial application, the high correlation between the two metals is not to be ignored. 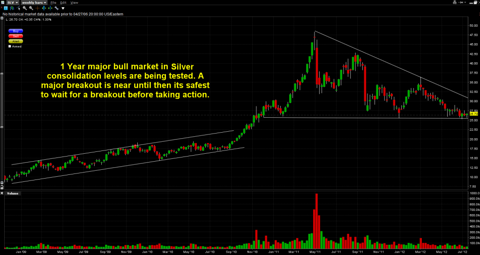 I think the long-term trade will be long in both metals, but I'm waiting to see a significant breakout out of these consolidations on heavy volume to confirm a direction. I would like to see both precious metals break out of their respective consolidations and ultimately have further confirmation in the USD. Any major headlines over the next couple months involving Europe or quantitative easing may provide us with the trigger for the next big move.

Get My FREE gold cycles and trading analysis here: www.GoldAndOilGuy.com