Brett earned his first contrarian investing profits in 2004 when he purchased an obscure investment (at the time): sugar futures. His friends on Wall Street stopped laughing soon enough when sugar rocketed to multi decade highs, illustrating that it indeed pays to be contrary. Brett quickly learned that the key to maximizing profits while minimizing losses is to invest against the crowd. He has since scoured the universe of stocks, commodities and options, searching for popular and tradable market misconceptions. Brett has been featured in The Economist, Forbes, The Globe and Mail, Chicago Tribune and Seeking Alpha. He is a graduate of Cornell University, with a degree in operations research and industrial engineering. In addition to his love of investing, Brett is an experienced technology entrepreneur. He co-founded two successful high-growth software companies, Chrometa, maker of the world’s most advanced timekeeping software, and LeadDyno, an online marketing tool for small businesses.

Today, Karl Rove penned an op-ed for the Wall Street Journal blasting Barack Obama for "one of the all-time presidential PR disasters" in describing Obama's economic summer 2010 policies.  Rove cited Obama's falling approval rating - from 42% in May, to 35% in August as evidence of his ineptness.

But Rove's cavalier causality about Obama's approval rating struck me as inaccurate.

Obama's approval rating has been in a steady downtrend from the moment he was inaugurated.  Here's a firmly entrenched trend that is NOT Obama's friend: 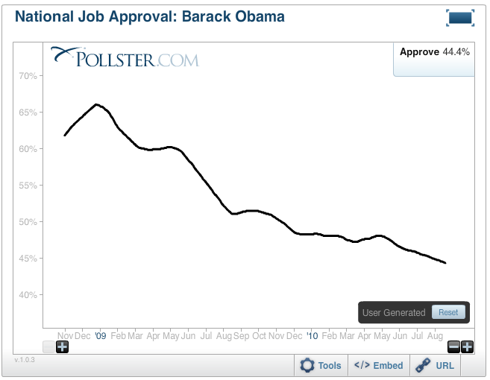 Hard to make the case that Obama's woeful summer was the lone catalyst here!

Which got me thinking - what actually drives presidential approval ratings?  Do they just ebb and flow with the stock market, as suggested by market observers like Robert Prechter?  It's a tidy theory that offhand explains the wild popularity of Reagan and Clinton - as well as the short one-term fate of George H. Bush.

Doesn't seem to fit the bill for Obama, though - stocks have been rallying like crazy practically since he took office:

From March 2009 until April 2010, Obama couldn't have asked for anything more from the DJIA. (Source: StockCharts.com)

How about the DOW priced in "real money" - ie. gold?  I've heard Prechter mention this as a "hidden reason" why George W. Bush actually presided over a wicked bear market.  When priced in real money, the DOW got torched over his tenure - despite rising in nominal terms.

Has it been the same deal for Obama?  It's been "blah" - but not disastrous... The DJIA, which was absolutely hammered with respect to gold during the final 2 years of the Baby Bush presidency, has actually held up fairly even during Obama's reign.

Though it does highlight how hollow the recent rally has been.  While impressive in nominal terms, it's been dead flat when priced against real money.  A market technician might look at the chart above, and wonder when the next leg down is going to come - the last 18 months almost appear like a expanded flat correction.

Perhaps the unemployment rate is a better potential driver of the president's approval rating?  After all, not everyone in the US owns stocks - but the vast majority of people would like to be employed. Unemployment jumped about 2% to date during Obama's tenure - but that's only the "official statistics."  And as you know, this pig gets all dressed up in the finest cocktail dress and lipstick before Uncle Sam allows her out of the White House!

Let's wipe that hog down a bit with some data from John Williams at ShadowStats.com that "keeps it real":

Holy smokes - 16% unemployment when measured by U-6!  No wonder Obama's approval rating is in the tank!

I think broader unemployment measures are probably the most accurate driver of Obama's approval rating.  Whether or not you think Obama has direct control over this measure is another story - but it appears that the broader trend in unemployment drops right to the bottom line in his approval ratings.

Perhaps unemployment numbers overtake the DOW when things get really bad.  Which would intuitively make sense - it's little consolation for some unemployed dude that the DOW is back above 10,000.

Meanwhile, we can see Rove's op-ed draws a hasty, inaccurate conclusion to Obama's bummer summer.  He may be having serious issues, but these trends have been in place for some time now.

When economic times are good, voters love incumbents.  When times are bad, they run them out of town.  It's that simple.

I am neither supporting nor lambasting Obama here.  I'm just observing that he needs a measurable drop in umemployment, coupled by a rise in the DOW (in nominal AND real money terms) to avoid being a "one-term and out" president.  If these trends stay in place over the next two years, he's most likely toast.