For juniors overall 2011 and 2012, so far, have been a veritable plague. Many a junior market capitalization has painfully shrunk. There are often individual reasons beyond general market malaise for that pain, of course. Some juniors have disappointed (former) investors with lackluster plans for minerals assets. Some may be in project development periods that are too boring for the gambler. But beyond those and other individual causes, it is hard to ignore the greater downward pressure on speculative investing over the past year or so as paramount. And this plague - symptoms of which include feverish risk aversion - has left some members of the broader junior population with, relative to market capitalization, fatty stores of cash. 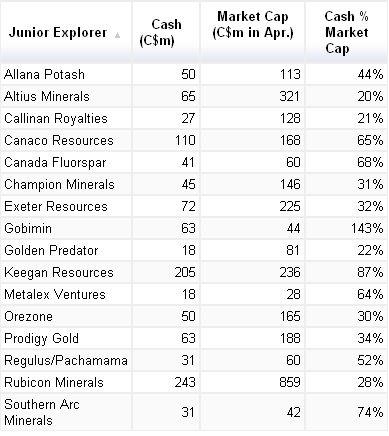 A good number of other juniors were not far behind. Allana Potash (TSX: AAA) held C$55 million cash as compared to a C$113 million market cap. Prodigy Gold (TSX_V: PDG), after a recent financing, will hold some C$63 million cash versus its C$188 million market capitalization. And Exeter Resource (TSX: XRC) has about C$72 million in its kitty and a market capitalization of C$225 million.

A quick look at a few junior producers tells a similar tale of deflated market capitalizations versus inflated cash piles. Nevsun Resources (TSX: NSU) held at least $347 million in cash, about 60 percent its C$578 million market capitalization. Capstone Mining (TSX: CS), with a market cap just over a C$1 billion, had nearly half that in the bank.

This cash bloat has at least one common cause. Over the past year many of these juniors followed a very similar shareprice history: heavily down as the junior market soured. That has inflated cash reserves. Gobimin is trading around C$0.65, which is well off recent highs of around C$0.80. Allana was well over C$1.50 in the first half of last year. Now it's closer to C$0.50. Keegan Resources traded near C$8 during the first half of last year whereas these days it's closer to C$3. Exeter was between C$4 and C$5 for much of last year, but recently hit C$2.50 or so. Canaco Resources was over C$4.00 mid last year. It is now under C$0.86. And, finally, producers such as Nevsun and Capstone are significantly off higher trading ranges that they enjoyed last year.

No doubt there are particular circumstances at work in these - and many other - junior stories that, to varying degrees, make cash holdings look more incredible than they really are. Things like mega projects that will need fullsome financing to go forward or looming capital spending programs set to expand or extend production. But in this cash bloat there is also the far more pervasive current: a general, incontrovertible market sickness eating away at junior market caps and leaving cash constitutions comparably olympic in health.

These cash highs may support an emerging sentiment among analysts that, on the whole, the junior market is oversold. Meaning: it could be time to invest in some juniors. Canaccord's junior mining team recently let it be known it thinks so as far as the gold sector. Making the time-to-buy case in its daily newsletter the Morning Coffee Canaccord put it this way. "Despite all of this negative vibe on gold equities, our Junior Mining Team believes that technically, fundamentally, and intuitively, they appear oversold. The best part is that, when the bulk of investors are nervous, and selling, is when smart money is selling faster. We jest, but is it time to plug your nose and dive in? We think so."

Similarly, Haywood Securities argued in a recent roundup of gold and silver equities that some juniors are looking cheap. "The market selloff that affected much of 2011 has surfaced a number of interesting investment opportunities in the gold & silver space." As advice to shoppers, Haywood added, "Our preference is for companies with the same core advantages that have rewarded investors in the past, including management strength, technical expertise, projects with geological merit and attractive cash to market capitalizations."

Are the wolves to come out then? picking off those juicy stragglers in the junior herd? If they are they will undoubtedly consider cash, among other equally important factors, in making their choices. This is more true now than it was in recent years. Financing sources have gone dry and if tougher financing days are here to stay, then some juniors are going to wither. But that ultimately could be good for investors and juniors as the former separate the the meat from the bones. In recent years, with such a vast number of juniors to choose, some argue a sort of junior cannibalism occurred. Too few investors have spread precious dollars between a glut of competing stories. With fewer juniors stories for sale, however, it would be easier to reward those with promising mineral assets.