ILC currently holds highly prospective projects in the most prolific areas of the world for lithium and rare metals. International Lithium Corp. has recently reinforced its relationship with strategic partner Jiangxi Ganfeng Lithium Co Ltd, from China, through an increased equity stake of 18.1% to further advance the core ILC projects.

TNR Gold holds the strategic stake in International Lithium with its strategic partner Ganfeng Lithium and Royalty on Mariana lithium project in Argentina.

One of the world's largest undeveloped copper deposits to which TNR holds a 0.36% Net Smelter Return (NSR). Located on the Andean copper belt, host to some of the world’s largest copper mines. McEwen Mining Inc. is the owner and operator. 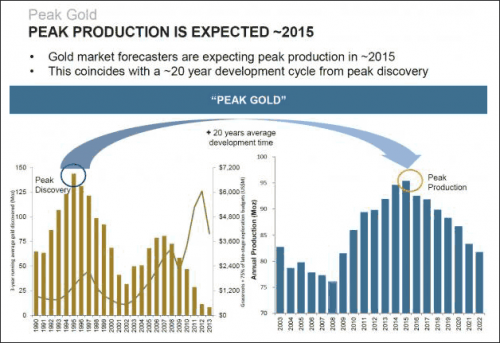 Alasdair Macleod walks us through the New London Fix and China's role in the gold market. Reuters has reported before about the coming China Yuan Fix for Gold - it supposed to bring the new reference point for the real physical market in Gold.

"Gold production is expected to peak in 2015. As the next chart suggests, the discovery cycle peaked some 20 years ago, and that will only reflect as of this year in the production volumes. Combine this with the falling gold prices (currently right below the average cost of production), and the result is a series of liquidations of miners and mining projects which would lead to an even more drastic short-term decrease of gold output." 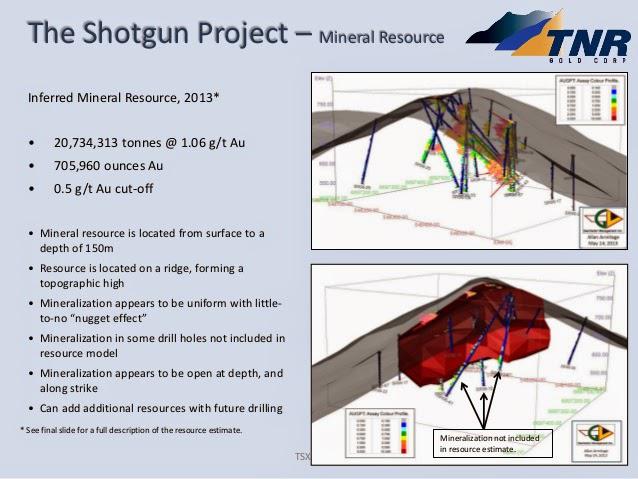 This month the physical gold market will undergo radical change when the four London fixing banks hand over the twice-daily fix to the International Commodity Exchange's trading platform on 20th March.

From 1st April the Financial Conduct Authority will extend its powers from regulating the participants to regulating the fix as well. This will transfer price control away from the bullion banks allowing direct access to the fixing process for all direct participants and sponsored clients.

From this flow two important consequences. Firstly, the London market is changing from an unregulated to a partially regulated market, reducing room for price manipulation. And secondly, the major Chinese state-owned banks, assuming they register as direct participants, have the opportunity to dominate the London physical market without having to deal through one of the current fixing banks. No announcement has been made yet as to who the direct participants will be, but it is a racing certainty China will be represented.

Implications of becoming a regulated market

Under the current regime a buyer or seller on the fix has to deal through one of the four fixing bullion banks. The information gained by them from seeing this business is crucial, giving them a quasi-monopolistic trading advantage over all the other dealers. Instead, buyers and sellers will be anonymous during the auction process.

The new platform should, therefore, ensure equal opportunity, eliminating the advantage enjoyed by the fixing banks. Crucially, it will change market domination from the privileged fixing members in favour of the deepest pockets. These are almost certain to be China's through the state-owned banks which already control the largest physical market in Asia, the Shanghai Gold Exchange (SGE).

China actually took its first deliberate step towards eventual domination of the gold market as long ago as June 1983, when regulations on the control of gold and silver were passed by the State Council. The following Articles extracted from the English translation set out the objectives very clearly:

Additionally, China has deliberately developed her gold production regardless of cost so that she is now the largest producer by far in the world today. State-owned refineries process this gold along with doré imported from elsewhere. None of this gold leaves China.

This being the case, the growth of Chinese gold imports recorded as deliveries to the public since 2002 is only the most recent evidence of a deliberate act of policy embarked upon thirty-two years ago. China had been accumulating gold for nineteen years before she allowed her own nationals to buy any when private ownership was finally permitted. Furthermore, the bullion was freely available, because in seventeen of those years gold was in a severe bear market fuelled by a combination of supply from central bank disposals, leasing, scrap, rapidly-increasing mine production and investor selling, all of which I estimate totalled about 76,000 tonnes in all. The two largest buyers for all this gold for much of the time were the Middle East and China. The breakdown from these sources and the likely demand are identified in the table below taken from my article for GoldMoney on the subject published last October, where a more detailed discussion of global bullion distribution during those years can be found.

Put in another context the cost of China's 25,000 tonnes of gold equates to roughly 10% of her exports over the period, and the eighties and early nineties in particular, also saw huge capital inflows when multinational corporations were building factories in China. However, the figure for China's gold accumulation is at best informed speculation, but given the determination expressed in the 1983 regulations and subsequent events it is clear she had deliberately accumulated a significant undeclared stockpile by 2002.

So far China's long-term plans for the acquisition of gold appear to have achieved some important objectives. Deliveries to the public through the SGE since only 2008 totalled 8,459 tonnes, gross of returned scrap, probably more than 9,500 tonnes since 2002 given estimated domestic mine production of 1,352 tonnes between2002-2007.

With such a large commitment to this market, we must now anticipate the next stage for China's gold policy, which is why the changes in London may be important.

China now has the opportunity to take a dominant role in London, without having to direct its order flows through the fixing banks. Therefore, it is no exaggeration to say that from 20th March, China will be able to control the global physical gold market, which will permit her to manage the price. She has the deepest pockets, backed by the largest single stockpile.

China's motives for taking control of the gold bullion market have almost certainly evolved. The regulations of 1983 make sense as part of a forward-looking plan to ensure that some of the benefits of industrialisation would be accumulated as a counterparty risk free national asset. This reasoning is similar to that of the Arab nations capitalising on the oil-price bonanza only ten years earlier, which led them to accumulate their hoard for the benefit of future generations. However, as time passed the world has changed both economically and politically.

2002 was a significant year for China, when geopolitical considerations entered the picture. Not only did the People's Bank establish the SGE to facilitate deliveries to private investors, but this was the year the Shanghai Cooperation Organisation (SCO) formally adopted its charter. This merger of security and economic interests with Russia has bound Russia and China together with a number of resource-rich Asian states into an economic bloc. When India, Iran, Mongolia, Afghanistan and Pakistan join (as they are committed to do), the SCO will cover more than half the world's population. And inevitably the SCO's members are looking for an alternative trade settlement system to using the US dollar.

At some stage China with her SCO partner, Russia, will force the price of gold higher as part of their currency strategy. You can argue this from an economic point of view on the basis that possession of properly priced gold will give her a financial dominance over global trade at a time when we are trashing our fiat currencies, or more simply that there's no point in owning an asset and suppressing its value for ever. From 2002 there evolved a geopolitical argument: both China and Russia having initially wanted to embrace American and Western European capitalism no longer sought to do so, seeing us as soft enemies instead. The Chinese public were then encouraged even by public service advertising to buy gold, helping to denude the west of her remaining bullion stocks and to provide market liquidity in China.

What is truly amazing is the western economic and political establishment have dismissed the importance of gold and ignored all the warning signals. They do not seem to realise the power they have given China and Russia to create financial chaos by simply hiking the gold price. If they do, which seems to be only a matter of time, then London's fractional reserve system of unallocated gold accounts would simply collapse, leaving Shanghai as the only major physical market.

Therefore the failure of the London bullion market to see strategically beyond its short-term interests has opened the door to China's powerful state-owned banking monopoly to control the gold bullion market. This is probably the final link in China's long-standing gold strategy, and through it a planned domination of the global economy in partnership with Russia and the other SCO nations.