The most recent Federal Reserve Senior Loan Officers Survey conducted at 64 large banks confirms what we have suspected. After a long period of tightening, loan standards have stabilized and for larger borrowers they have loosened slightly. The survey provides less hope for smaller borrowers, show in red on the chart below. 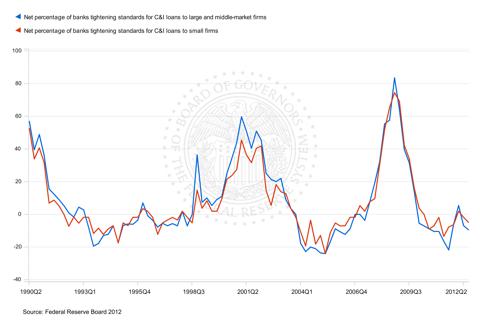 This confirms data we published previously showing that small business lending has entered into a choppy period in 2012 after seeing moderate improvement from the 2009 lows during 2010 and 2011. Things are only likely to get worse for smaller borrowers as their natural allies, the community banks, struggle with maturing underwater CRE (commercial real estate) loans, continued pressure from their regulators and rapid industry consolidation.

FDIC data shows that bank credit availability is likely deteriorating for many cash starved small businesses. From December 31, 2010 to March 31, 2012, C&I (commercial and industrial) loans at banks over $1 Billion, i.e. those that focus on lending to large multinationals and mid-sized domestic firms, grew approximately 20% from $1 Trillion to $1.2 Trillion. For banks under $1 Billion, i.e. those most focused on small business lending, C&I loans actually dropped 6% during the period from $110 Billion to $103.5 Billion.

We increasingly see smaller firms struggle to obtain funding if they do not have adequate hard collateral (equipment, inventory or receivables) or if the owners don't have personal assets to pledge to support the loans. If you are a small business with a capital need to support a growing business, you're asking "what options do I have?" Recently some innovative non-bank financial services firms have stepped into the breach and are beginning to offer new forms of small business finance based not on specific collateral, balance sheets or income statements, but on a company's proven ability to generate revenue. If these early experiments are successful, this development has the potential to revolutionize small business lending, with profound implications for existing competitors in the banking industry such as those represented in the First Trust NASDAQ ABA Community Bank Index Fund (ETF) (NASDAQ:QABA) as well as factors, asset based lenders and other traditional non-bank debt providers.

Let's consider a hypothetical example. Albert Chin is a successful general practice physician in the Bay Area. Over time he has seen his patient population age and, increasingly has found himself serving patients at or nearing Medicare age. His patient population suffers from many chronic conditions related to decades of sedentary lifestyles and increasing levels of obesity. Dr. Chin strongly believes that engaging his patients in a program of rehabilitation and appropriate forms of physical exercise will play a major role in both increasing their personal well-being and reduce the lifetime healthcare costs that will be incurred by Medicare on their behalf.

Under an obscure provision of the federal health care law, Dr. Chin has the opportunity to participate in an experimental program to offer his patients a comprehensive wellness program. Under the program Dr. Chin will be reimbursed for providing his patients access to specialized physical training from exercise physiologists and professional trainers. Through the program he will equip them with the skillsets needed to restore their sedentary bodies to a healthy level of physical activity and develop a lifetime habit of personal conditioning.

While the program provides for levels of reimbursement that will enable Dr. Chin to operate a highly profitable wellness practice, the program does not provide funding for the construction buildout and exercise equipment that will be required for his new facility. Additionally he will need funds for initial staffing and working capital to carry the patient accounts until reimbursement begins to flow. Ultimately he believes that private insurers will join the program as well as they begin to see dramatic reductions in acute care costs for physically fit insureds.

Dr. Chin started his funding search with visits to his "executive" banker at Globespan Bank and to a friend who heads commercial lending at a nearby community bank. Despite the fact that Dr. Chin had a long established and highly successful medical practice, in each case he learned that the bankers offered no good options. They would be happy to advance as much as he needed so long as the loans could be collateralized with certificates of deposit or other liquid collateral with a value of at least 120% of the loan amount. Somewhat naturally Dr. Chin's response was "if I had such collateral why would I need the loan?"

Fortunately Dr. Chin received a call from Sam Friedman of Urway Financial, an innovative private lender that had developed a creative mechanism to bridge the gap. Sam explained that his firm understands that, in the current business environment, many sound small businesses do not have the physical assets or liquid personal wealth banks demand to as support for their lending activities. Sam confirmed Dr. Chin's experience with the banks, explaining that, prior to the financial crash, banks had been able to bridge the gap by accepting second mortgages on residential real estate to back their small business loans. With the collapse of residential real estate prices, that option is no longer available and many bank lenders have found they are spending more time working out past problems than in making new loans to support business growth. Urway was founded to fill that gap.

The new breed of cash flow based private business lenders realizes that a business's proven revenue stream is their real collateral and they have developed innovative mechanisms to protect themselves through capturing a portion of that revenue stream to assure repayment. In early iterations these lenders structured advances through purchase of a percentage of a business's future credit card receipts, which could be contractually allocated to the merchant cash advance company to provide its return on investment. More recently some of these firms, as well as innovative asset based lenders, have begun to experiment with loan-based structures in order to support borrowers who do not utilize credit cards in their business. These lenders are able to structure loans based upon the anticipation that they will received a fixed portion of their borrower's revenue until the loan is paid in full. The lenders protect themselves with the ability to withdraw the payments directly from the borrower's bank account on a predetermined regular payment schedule.

While the merchant cash advance business was traditionally focused on short term funding needs, with typical payment periods projected in months, the new revenue based loan structures enable lenders to provide funding amortized over longer borrowing periods. Also while merchant cash advances have traditionally been limited in size ranging from tens to hundreds of thousands of dollars, there is no theoretical limit to the size of the new revenue based loan structures.

While funding through cash advances and revenue-based loans currently entail funding costs higher than those charged by traditional banks, the new structures offer a number of advantages over traditional bank lending:

Over time, as this market develops, we anticipate that borrowing costs will decline and the number of lenders will increase dramatically. For banks this type of lending involves a major shift in thinking and requires new underwriting approaches and much more aggressive loan administration than traditional loan products. Thus we anticipate that non-bank lenders will initially have a significant advantage in this new market. However, while this market is currently focused on small business borrowers with total funding needs under $1 million, we anticipate the revenue based structures will increasingly be applied to larger borrowers to fit the needs of an increasingly service based economy. As that happens the banking industry will not be able to ignore the competition and some of the non-bank cash flow lenders will likely become acquisition candidates for the banks.

For Dr. Chin the news has been good. Dr. Chin was able to obtain a sixteen month $400,000 revenue based loan from Urway in a matters of days, not the weeks or months often required for a bank loan. The lender was able to look to the strong track record of Dr. Chin's existing practice, where his historical revenue steam and profitability was more than enough to support the anticipated financing requirements for the new wellness business. He's added much needed jobs to the local economy and has already begun to explore ways to joint venture with other physicians to provide similar services in additional markets.