I have always been a stock market enthusiast. My formal training is informal. I am self taught and soak up as much knowledge as can be absorbed. I love the financial industry and would work for free. I am a fundamental investor who likes crunching the numbers. I trade what I see. I picked up on the Max Pain type theory back in 2007 and use that data as the main basis to take my positions. I currently run the site dedicated to AAPL Max Pain to help people understand and see it for themselves. I love educating people on the unbiased raw data and learning every day from others.

I am writing an informal instablog as I only want to give the results from full year 2012 while adding a few missing items.

So How Did Year Two Fare?

How Did The Poorman Manage? 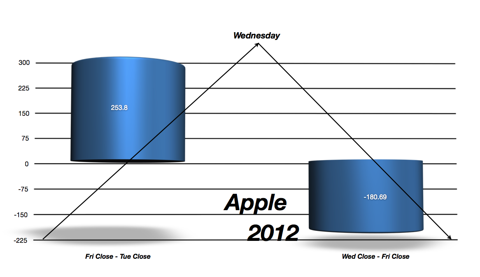 You should really have a low-cost broker to trade this set-up. Something like Interactive Brokers (IB) or Tradestation. These two brokers charge $1.00 to trade 1 or 100 shares. I use IB. This algo is pure speculative trading. It is based on historic price trends left in the wake of Apple's options.

You can modify this algo anyway you would like. For example, using Wednesday open vs Tuesday close greatly outperformed in 2011 and 2012. This was mainly due to Apple's earnings releases being on Tuesday after the close. I set it up originally on a Tuesday cycle to stay away from earnings risk. I also used Tuesday close as this reduces time risk in the market. I personally still use Tuesday close. I have went back and forth modifying the Friday buy. Originally I used the market close. Towards the end of summer I switched to buying at 9:30 AM PST. I did this because by the time Friday close comes, all front week calls are closed out, lifting the albatross and letting Apple rise into the close. 9:30 AM just represent market halftime, not some secret sauce I've acquired. I have switched back and forth on this 9:30 AM or Friday closing print. I do not recommend constant altering like this, as you need to become robotic as possible.

Apple recently started to trade on a 5 consecutive weekly options cycle. Will this derail the Monday - Tuesday gain and Thursday - Friday loss? As this whole algo was and is based on weekly options. We will find out pretty quickly if this will force The Poorman to pack his bags while saying "it was fun while it lasted." Until then, here's to 2013.

And oh yeah, surf's up dude.