Nikita Patel is an undergraduate student majoring in Supply Chain Management in the Eli Broad School of Business at Michigan State University.

The Chief Executive Officer of Apple, Timothy Cook, noted during an event that “its watches just beat Rolex to become the best-selling watchmaker in the world, with sales up 50% year-over-year.”

Fitbit released their first product, the Fitbit Flex, back in May 2013. The Fitbit is known to be the “21st-century pedometer.” Throughout the day when you are wearing the Fitbit, it logs a range of data about your physical activities, like the number of steps you take, distance traveled, and the calories burned. It even has sensitivity features which allows it to detect how vigorous your motions are, so it can therefore distinguish between different types of activity such as walking, jogging, etc.

Upon its launch, the Apple Watch quickly became the best-selling wearable device. The Apple Watch is known to be a “smaller version of your cellular device.” It allows wearers to do almost everything that a phone allows the person to do, right from the ease of his or her wrist. It has the ability to send texts, receive phone calls, and even check and reply to emails. Not only does it work as a phone, it does almost everything that a Fitbit does. It logs the number of steps you take, distance traveled, and calories burned. 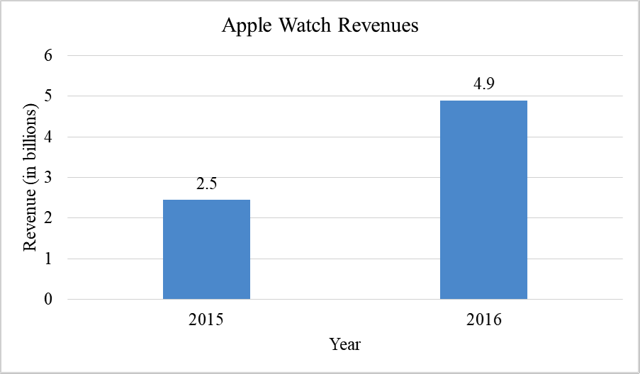 Apple Watch 2016 revenues doubled those of the year prior. With the new features found on the recently released Apple Watches, price does not appear to deter consumer demand for the product.

So, what does this mean for the Fitbit? Although there are people who love the Apple Watch, there are many who prefer a Fitbit over an Apple Watch. Fitbit revenues are continuing to increase as the data shows in Figure 2. 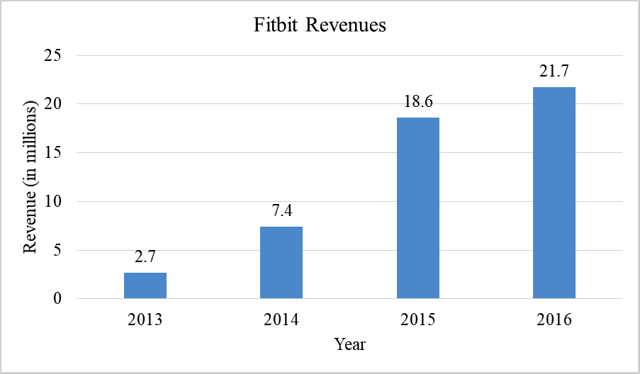 From 2013 to 2016, there has been a steady increase in revenue recorded for the Fitbit company.

Consumers find that the Fitbit is so simple to use. Many find it perfect for anyone of any age, whereas some might say the Apple Watch is only for people who are tech-savvy. Fitbit shows how many steps walked, miles walked, calories burned, minutes spent active, and battery life. The Fitbit also tracks how much you sleep, which is easily accessible through the Fitbit app on your cellular device.

The Fitbit even comes with a silent alarm feature, using small vibrations to wake you up or remind you to do small tasks throughout the day. Some versions of the Fitbit also have the ability to track a wearer’s heartrate.

Since the Fitbit operates very simply, the battery can last up to a week without needing to be charged again. Some prefer the simplicity of the Fitbit and its ease of use.

Why Not the Fitbit?

“CNBC tested two different [Fitbit] units over the course of a week and walked away relatively unimpressed with what it offers for $299, compared to an entry-level Apple Watch that costs just $30 more.”

Haselton was dissatisfied with the bugs in the Fitbit program during his personal consumer test. He ended his review of the Fitbit Ionic by saying,

“I was happy to jump right back to my new Apple Watch Series 3, which does almost everything the Fitbit Ionic can do and more.”

Consumer product journalists like Haseltine might assume that the Apple Watch is going to beat the Fitbit in the market due to its perceived (and real) technological superiority. However, both Apple and Fitbit are showing significant revenue gains, thus indicating the market may be big enough for both company’s products – for now.

Can Fitbit Survive Apple In The War For Your Wrist?

The latest Fitbit can't match up to the Apple Watch