This time, he first tweeted,

Then an hour later, he corrected it.

"Meant to say annualized production rate at end of 2019 probably around 500k, ie 10k cars/week. Deliveries for year still estimated to be about 400k."

First, there is nothing factually incorrect in these tweets.  The unit of cars produced by a technology/car company is a major value driver.  There is a unit break even point.  Investors are well served by getting these estimates directly from the CEO.  The number of units produced helps investors to calculate the value of the company.

Mr. Musk gave these numbers in a public forum, where it is easily seen by all the interested investors.   Isn't it good that he did not mention his forecast in a closed private institutional investors' breakout room to a small group of large investors, as the CEOs do at investors' conferences?

Second, the Company said that the estimates its CEO gave are totally in line with the previous official guidance given to the public in January 2019.

Third, it appears that the SEC (the Securities and Exchange Commission) has an axe to grind against Mr. Musk.  He had called the SEC the “Shortseller Enrichment Commission.”  Someone at SEC is upset with him.  The SEC is looking for a chance to trap Mr. Musk.

All this, SEC trapping Tesla CEO and causing the share price decline is temporary due to it being just noise.  At most, Tesla Inc, will pay yet another fine and Musk and Tesla will move on.

First, every Tesla car owner I talk to - and I talk to one owner per week - not only they like their cars, BUT there is not one single thing that they don't like about their car.  With that kind of customer loyalty and due to quality of the product, Tesla will do well going forward. 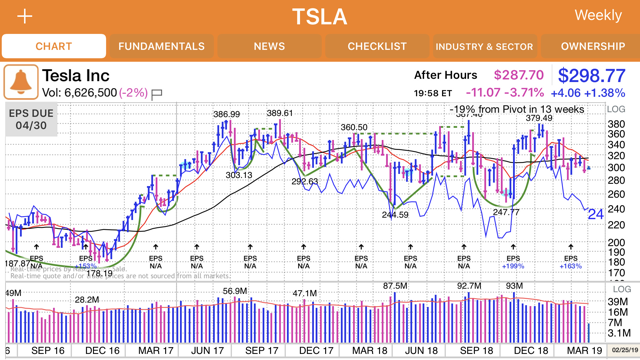 Third, Tesla is (going to be) a takeover target.  Musk is going to get tired and move on to greener pastures, which is for him, more challenging endeavors, like sending men to Mars and beyond.  He will sell Tesla when he gets tired of the regulators.  Creative visionaries like him do not want to waste time with trivial contempt charges for "one" tweet.

Tesla Inc. will eventually have to sell itself anyway, because of competition.  Tesla's biggest threat is not lack of creativity, the SEC or Mr. Musk's tweets, but the galloping competition.  It is beyond scope of this article, but nearly every car manufacturer is working on an electrical vehicle to compete with Tesla. https://drivemag.com/news/tesla-s-competitors-the-big-tsunami-of-ev-models-to-come-until-2022  Timing is anyone's guess. https://www.cnbc.com/2019/01/31/automakers-flood-market-with-electric-vehicles--potentially-creating-pile-up-of-epic-proportions.html

Tesla has the first mover advantage, and everyone knows its name.  Every owner I've talked with loves his/her Tesla.  The share price of TSLA will bounce back from tonight's decline.  So it is buy!

Additional disclosure: Anyone or any organization or company I might be associated with has NO position and will have NO position in TSLA and no plans to initiate any positions, long or short, within the next 72 hours.