I am a statistician and individual investor. While my investments are mostly in low-cost index funds, I enjoy analyzing stock market trends and trying to find ways to beat the market.

Investopedia.com defines a leveraged ETF as "an exchange-traded fund that uses financial derivatives and debt to amplify the returns of an underlying index." ProShares UltraPro S&P 500 ETF (UPRO) is a bullish leveraged ETF that aims to multiply the daily return of the S&P 500 by a factor of 3. UPRO's 3x multiple works on daily gains, so investors should not expect to realize 3x the S&P 500's growth over any extended period of time.

The focus of this article is on the merits of long-term investment in a 3x S&P 500 ETF. In my experience, the mere suggestion of holding a leveraged ETF for longer than part of one day is often met with outrage from people familiar with the funds. The consensus among stock market analysts seems to be that leveraged ETFs are best suited for intraday speculative trading by professionals (e.g. Bob Pisani at CNBC, Joe Light at The Wall Street Journal, Justin Kuepper at Yahoo! Finance). There are some good reasons to exercise caution with leveraged ETFs:

There are even more technical issues associated with leveraged ETFs and UPRO in particular (fully described in its prospectus). Basically, there are numerous reasons why UPRO might suddenly exhibit erratic behavior and deviate from its 3x goal. Potential investors should be aware of these issues. In this article, I operate under the assumption that UPRO will continue to track the S&P 500 as well as it has during its first 5.7 years. Finally, potential investors should note that UPRO has an expense ratio of 0.95%.

Now that we've got background and technical issues out of the way, here's a basic outline of the meat of the article. In the first section, I look at the performance of UPRO since its inception in 2009. I conclude that UPRO has done an excellent job tracking 3x daily S&P 500 gains and has had tremendous growth during this bull market, but has also suffered severe drawdowns.

In light of UPRO's excellent tracking, I focus the second section on historical gains for a hypothetical "zero tracking error" 3x S&P 500 ETF, going all the way back to 1950. My conclusion: incredible growth (16.1% annualized), nauseating drawdowns (up to 97.7%). Histograms show that the hypothetical 3x S&P 500 ETF actually does average roughly 3x greater monthly and annual gains than the S&P 500.

Finally I summarize my perspective on leveraged ETFs and how they might fit into an investor's portfolio.

UPRO's Performance in its First 5.7 Years 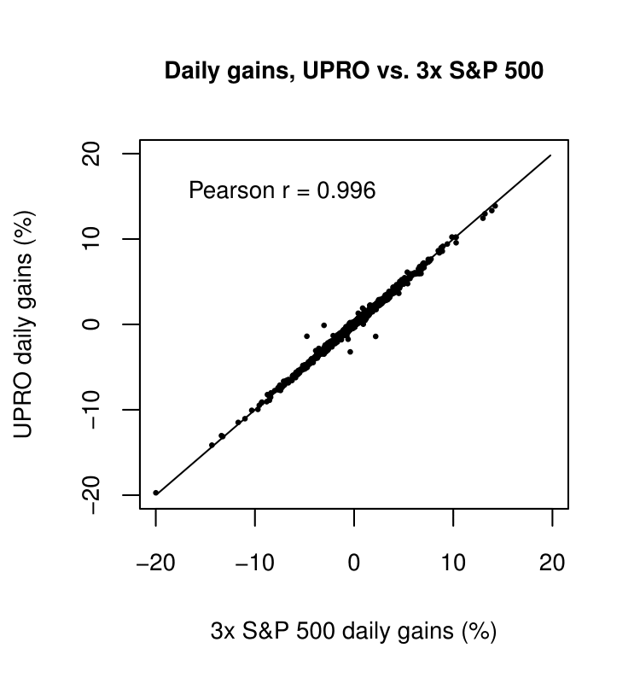 Now let's look at UPRO's growth. It turns out an investor would have done tremendously well buying UPRO the day it debuted in 2009 and holding it ever since. Consider its growth compared to the S&P 500 over UPRO's lifetime (Table 1). Annual growth of 49.8% turns $10,000 into $1 million in approximately 11.5 years. On the other hand, UPRO was prone to drawdowns of over 50%, while the S&P 500 never lost more than 20% of its value. 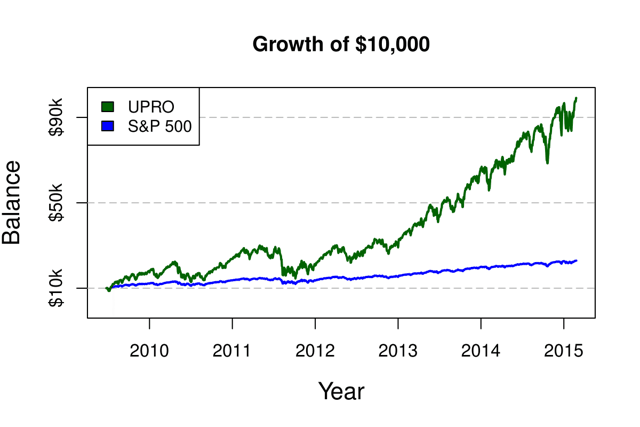 Huge gains during a 6-year bull market do not automatically render UPRO or other leveraged ETFs a good investment going forward. We would like to consider historical performance going back further than 2009 to get an idea of how UPRO would perform in various market scenarios. While UPRO has only been around since 2009, we can easily go back and see how a hypothetical 3x S&P 500 ETF with no tracking error would have performed throughout the history of the S&P 500. This analysis is justified by the excellent tracking of UPRO to 3x S&P 500. 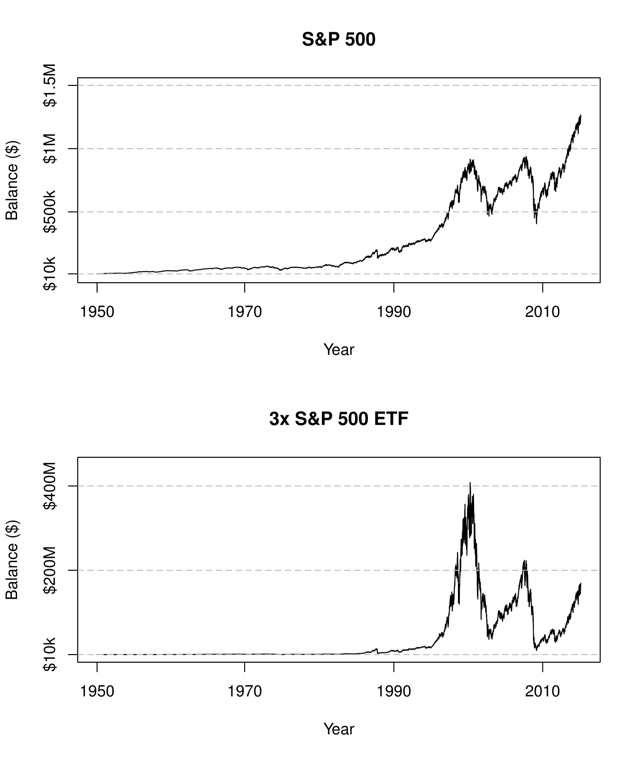 1 Calculation excludes 2010s since this was a partial decade. 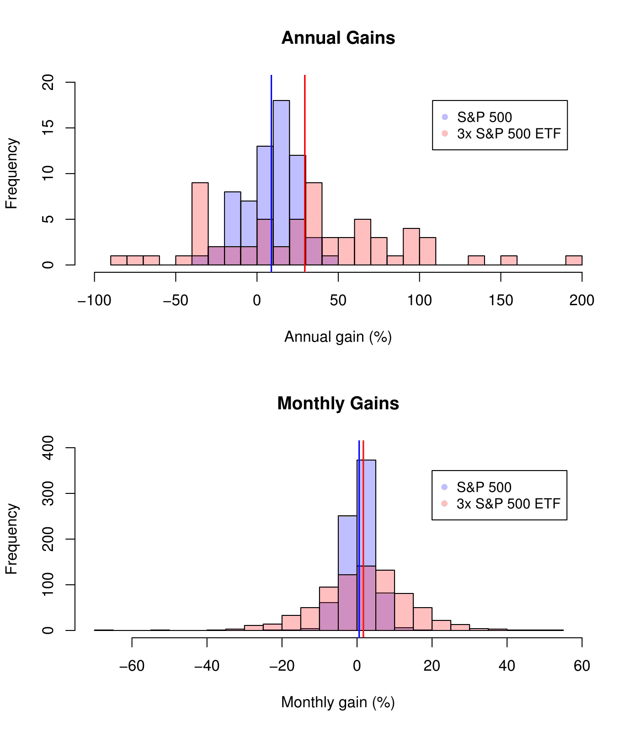 A few extra notes regarding annual and monthly gains:

To reiterate valid concerns with leveraged ETFs, potential investors should remember that investments in these funds risk huge drawdowns, potential loss of entire investment, and deterioration during periods of no net movement of the S&P 500. There is no guarantee that UPRO or any other leveraged ETF will consistently achieve its intended daily multiple going forward.

That said, I find buy-and-hold positions in UPRO very exciting. How can you not be impressed with 49.8% annualized growth over 5.7 years? I like the idea that you can realize such huge gains by betting on the market as a whole rather than trying to pick the one-in-a-hundred stock that is about to explode. The past 5.7 years have admittedly been a strong bull market, but even over the past 65 years a hypothetical 3x S&P 500 ETF averaged 29.4% annual gains. That's remarkable.

In my view, concerns about leveraged ETFs declining when the underlying index has no net change are somewhat overblown. While analysts often provide toy examples of how such deterioration can happen, historically there has only been one year since 1950 when the S&P 500 grew but the hypothetical zero-tracking error 3x ETF declined (1987). It rarely happens.

With potentially huge drawdowns or loss of your entire investment, you probably shouldn't put too much of your retirement savings in a fund like UPRO (I currently have 8% in UPRO). But in my view, a buy-and-hold position in UPRO is a great option for investors who don't mind taking on substantial risk for a real opportunity at tremendous growth.

Disclosure: The author is long UPRO.