Private investor. Excited with new technologies, such as EV, exoskeletons, green energy, AM.

I'd like to share with you all one interesting article with analysis of Ekso Bionics in case of lack of such information about company on Sigma Labs.

Editor's Note: Money Map Chief Investment Strategist Keith Fitz-gerald has uncovered six unstoppable trends - market forces so powerful that not even government meddling, reckless bank policies, or warring nations can slow them down. To access his latest investor briefing and get all his unstoppable trend research free, click here.

I've reviewed thousands of companies over the past 33 years in global markets, but none capture the imagination the way EksoBionics Holdings Inc. (OTCBB: EKSO) does.

The tiny exoskeleton maker just reported earnings and, as you might expect, there's broad-based growth in every metric that matters from revenue, to staffing, to new contracts, to overseas expansion. You name it.

But there's something the media isn't covering.

Ironically, it's the single most important factor in what I believe will ultimately be an exceptionally bright future for the company and savvy investors alike.

Here's why there's more upside for Ekso than any analyst will tell you.

7 Doubles in a Row Put the Odds in Your Favor 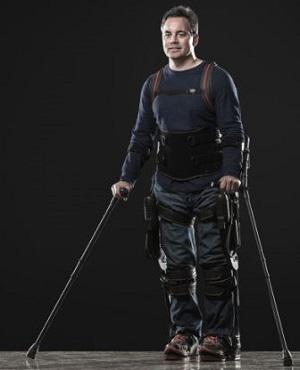 We spend a lot of time talking about the importance of lining your money up with Unstoppable Trends for one simple reason: doing so puts the odds of success in your favor.

Sadly, millions of investors do this backwards. They latch on to a promising young company making the latest gee-whiz-bang product and hope it'll catch on. Some do. Most don't.

The company developed a simple, elegant photo-sharing service that was named a runner up at Tech-Crunch in 2011. It was better than most offerings today, yet failed because its founders were so focused on making the "perfect" product that they neglected their primary markets.

That company developed a social application intended to allow users to share social details with their friends. Only trouble was people are very private when it comes to actual plans and RSVPing.

Flying cars, the knowledge pill of the 1960s, and even nuclear bombs for excavation as a part of massive construction plans like damming the Amazon River! Gone, gone, and never made it, thank goodness!

My point is that every single one of those failed ventures started with a promising technology then had to find a market or a use that the companies themselves had to create.

Ekso, on the other hand, is doing the reverse. Like many of the world's top companies, CEO Nathan Harding and his team identified a need first. Now they're building out a suite of products to meet it.

As part of that, they're rethinking previously accepted limits on human mobility, strength, and endurance. But, again, the need is already there.

Most importantly, at least for savvy investors anyway, they're tapping into a multibillion dollar market that's already in play - a trend we call Human Augmentation.

What's great about doing things this way is that central bankers cannot screw this up any more than social medicine can derail the potential. If anything, both those influences will grease the skids, so to speak. Moreover, corporate America is going to love it because Human Augmentation will boost margins in everything from construction to manufacturing as the utility of using it rises.

The Boston Consulting Group suggests that automation will cut manufacturing labor costs by 18% to 33% in the United States, Germany, China, Japan, and South Kora by 2025, even as productivity rises by more than 30%. Granted, that's a statistic talking about pure robotics, but imagine what happens when a human augmented by robotics can lift three times his or her body weight on the line… or at a job site… or on a carrier deck somewhere. Suddenly robotics becomes an integral tool, not just a means to an end.

Ekso is tapped into a market that's going to expand from only $16.5 million today to more than $2.1 billion by 2021, according to Wintergreen Research. I think that figure is conservative, by the way. My take is $3.5 to $5 billion when you count the ancillary growth in related technology developments like the heavy lifting I've just mentioned. But that's a story for another time.

My point is the projected growth rate works out to average year-over-year growth of 99.83% - essentially seven doubles in a row.

Don't forget, we're talking about a company that has 116 international patent applications and another 45 U.S. patents in play.

The Markets Can No Longer Overlook Ekso's Technological Edges

As you might imagine, Ekso's not alone in pursuing this. There are competitors, most notably ReWalk Robotics Ltd. (Nasdaq: RWLK) and Cyberdyne Inc. (TYO:7779), the two I get asked about most frequently. 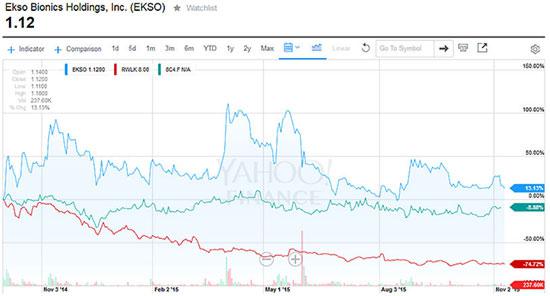 This tells me the markets are beginning to see what we see - superior technology, real results, and a very promising future.

The U.S. military recognizes this, having awarded Ekso an extension of its TALOS contract back in December. "We are honored to be the only exoskeleton provider in the program," CEO Nathan Harding said in last week's Q3 conference call, referring to the prestigious military contract.

Furthermore, the robust revenue growth that forced analysts to wake up to Ekso's potential back in March hasn't slowed down - it's accelerated. The company, in fact, just had the best quarter in its history, according to Harding.

According to the latest U.S. Securities and Exchange Commission filing, Ekso's revenue for Q3 2015 was up 84% year over year. Last quarter's year-over-year growth was "only" 75%.

That's proof positive in my book that the company's carefully targeted efforts in various business segments are paying off. Nine-month medical device segment revenue rose to $3.1 million, a 55% increase over the same period a year prior. Nine month engineering revenue grew to $3.6 million, which represents a double from the $1.8 million recognized during the first nine months of 2014.

Again, these are tiny numbers compared to the much larger companies we deal with regularly, but keep that in perspective. The company's sales cycle is a long one, so it'll take a while for the sales pipeline to work its way through the P&L.

Military contracts, industrial development, software… these are all long-cycle items that don't immediately hit the books like a bag of potato chips would. Based on simple extrapolation of current data, I don't think it's unreasonable to estimate an annual sales invoice pipeline of between $9.5 million on the low side and $14 million on the high side.

At the same time, sales and marketing expenses shot up 45%. Lots of people are prepared to call this a bust but they display their ignorance when they do. Making money costs money.

A company like Ekso has to spend disproportionately large sums of money at the beginning of every new relationship even though sales are not recognized for months to come. This is no different than, for instance, Boeing Co. (NYSE: BA) or a software company working on contracts with progress payments recognized at certain milestones.

I am particularly excited by one key metric above all others, though.

Ekso took nine years to hit 10 million assisted steps in 2014. Now, only two years later, the company has tallied a remarkable 33 million assisted steps. A year from now that figure may be 50 million as more devices enter service around the world and the insurance industry finally figures out the true potential Ekso's exoskeletons represent.

In closing, the company is trading at $1 and change at the moment, and the 12-month analyst mean price target is $2.83. As much as I would have liked to see $3 a share by now, I'm not disappointed.

Eventually the naysayers and speculators who are trying to hold on at these prices levels lose interest in playing their short-term games and they move on. Stability emerges concurrently with longer-term shareholders, and the company is off to the races on its merits.

Speaking of which, I think the remainder of 2015 is going to be very exciting for Ekso. If I'm reading the company correctly - and I think I am - I believe we're going to see another major capital raise and/or an uplisting to a major exchange.

Both of those things would be terrific because they'll attract fresh capital, and that means the company can expand still farther faster.

Editor's Note: Ekso dramatically outperformed the markets in the first 12 months after Keith's recommendation of the company to Total Wealth readers - but it's got far more going for it than we could reveal in just this article. For a full and free report on the "Unstoppable Trends" that will continue to power Ekso Bionics to new highs even while markets languish, sign up for Total Wealth here - it's free!

Have a nice day!

Disclosure: I/we have no positions in any stocks mentioned, but may initiate a long position in EKSO over the next 72 hours.