As you may recall, in our first Exchange Traded Fund (ETF) white paper we discussed the origins of the ETF vehicle. In this paper, we'd like to review the mechanics "behind the scene" that allow ETFs to work. It's safe to assume that most in the investment community are familiar with an ETF and are likely able to recite one or two ETF tickers, but we would wager that not many actually understand how an ETF trades daily or how it is able to mimic an index so precisely.

As far as ETFs themselves, they all trade relatively the same way. ETFs trade on various U.S. stock exchanges under individual tickers much like a common stock. The difference between an ETF and a stock is that behind the majority of the listed ETFs exists a process designed to maintain an ETF's value near the value of its underlying assets. Another commonality of the ETF universe, which applies to all of them except for the ETN, is the presence of an authorized participant (AP). An AP is typically a big bank, large asset manager or trading firm, whose job it is to act as an ETF's "arbitrator". The AP creates or redeems ETF shares based on market demand and the variance of the ETF's net asset value versus its price. APs will profit by closing the spread between an ETF's NAV and its market price. Now let's review each structure individually.

Electronic Traded Notes: As described in our previous paper these instruments are simply unsecured credit from the issuer, they hold no underlying assets and can be redeemed to the issuer for the designated returns.

Grantor Trust: This structure, popular with ETFs that track commodities, outright owns its underlying assets. The most well-known example is GLD, which tracks gold bullion. In this case, the ETF's APs are the only ones allowed to create additional shares based on secondary market demand. For example, if the ETF's share price is trading at a 2% premium to the value of its underlying assets an AP will begin the creation unit process. They'll contact Bank of New York Mellon, the ETF's administrator, and request the issuance of shares. It will then contact HSBC, the ETF's custodian, and based on the price of the ETF, the custodian will request a certain amount of London Good Delivery Bars (standardized bars of gold) to be moved from the AP's vault into the Trust's vault. Upon receipt of the gold HSBC informs BNY who then releases the new shares to the AP. The AP will sell them on the secondary market, thereby increasing the current share count and driving down the ETF price to the Trust's current NAV. The process is reversed in the event of increased ETF selling, which results in a discount to the asset value.

Open-End and Unit Investment Trust: While the UIT and open-end structures do have differences in terms of taxes and dividends, behind the scenes the process is essentially the same. For example, SPY is an ETF that tracks the S&P 500. If SPY is trading at a 1% premium to its NAV due to enhanced buying, an AP will come into the market and purchase the designated number of the underlying securities, in this case the 500 stocks in the S&P 500, and this is called a creation unit. A creation unit can be redeemed for a set number of ETF shares. The creation units are then presented to the ETF's custodian who will issue new shares of the ETF. The AP will sell these shares on the open market, decreasing the spread between the NAV of the underlying holdings and the ETF's price. The reverse holds true if the ETF is trading at a discount.

While the above processes may sound rather cumbersome, in actuality it's all quite efficient. To use SPY, GLD, and QQQ as examples, the below charts provide the premium or discount of each ETF against its underlying NAV over the last 5 years: 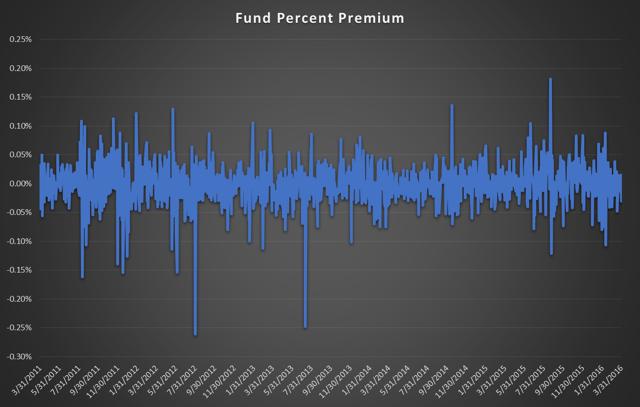 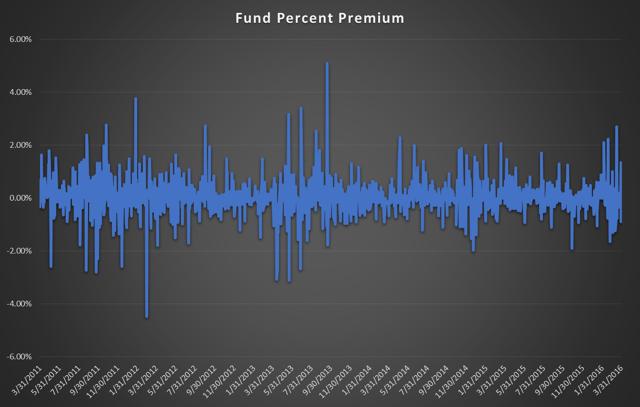 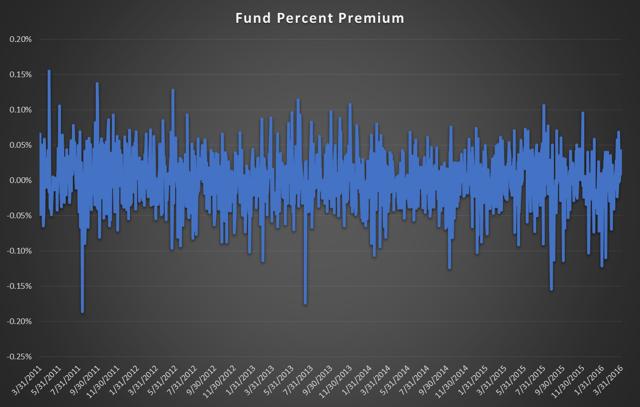 As is evident, aside from a few variations, SPY and QQQ rarely stray farther than 0.20% and -0.20% from their NAVs. More importantly, in the long run they follow the NAV quite closely. GLD, has varied farther from its NAV, which is due to the heightened volatility in the commodity market coupled with the added time needed to physically move gold within the ETF framework in association with daily asset flows. That said even GLD's NAV and price rarely differ for extended periods as is apparent from the overlap of the lines in the GLD chart.

Now that we've looked at the ETF mechanics per structure, let's review the differences between the creation/redemption process for equity and then fixed income ETFs. For an equity ETF such as SPY, the AP must purchase the underlying securities (creation units) tracked by the ETF. They then exchange them for ETF shares. For fixed income ETFs the process is not quite as straightforward. Bonds tend to be more idiosyncratic; one company may issue multiple bonds, each with its own set of covenants and trading terms. Many bonds do not trade every day and in fact my trade very infrequently. For these reasons, it is almost impossible for a bond ETF AP to acquire in direct proportions all the components of a bond index to exchange for ETF shares. Instead, they utilize a statistical sampling method. This method is often used in the formation and management of bond indexes. The technique attempts to track a universe of, for example, 2,000 bonds by selecting a representative 100 that, when combined, mimic the characteristics and returns of the full bond index. These 100 bonds are selected based on liquidity, thereby ensuring that the APs can trade relatively easily in order to participate in the creation unit process and maintain the ETFs NAV and price.

With the fixed income ETF creation/redemption unit process comes a number of questions. Namely, since these bonds are selected daily, theoretically if there are large inflows into a fixed income ETF, the number and characteristics of the aggregate type of bonds held in the ETF's custodian account may become so convoluted that they no longer reflect the index in which the ETF has attempted to track. Another concern is that if a series of these selected bonds becomes illiquid due to an unexpected credit event or a general decrease in liquidity then the losses on the sale of the bonds could be substantial, requiring a reduction in the ETF's NAV and losses to the ETF investors. Proponents of bond ETFs state that though short-term there have been large differences in premiums/discounts between bond ETF NAVs and prices, in the long run the ETFs have traded within a reasonable range versus the values of their underlying bonds. They also argue that the existence of bond ETFs add an extra layer of liquidity to the bond market since investors are able to net out buys and sells through the ETF before any residual trades filter down to the underlying fixed income market.

While we have provided a lot information in this paper, what we'd like for our readers to takeaway is that the ETF process is essentially an arbitrage designed to allow for an ETF price and its NAV to remain relatively in sync. The process is meant to minimize the effects of large daily inflows and outflows, providing insurance to the everyday investor that their ETF securities will provide the returns of their respective indices. While the method is not perfect it has allowed these vehicles to gain in popularity; as of 2015 ETFs have amassed over $2 trillion and for now, we predict this number to continue to grow.

Please stay tuned for our next paper, which will further describe areas within the ETF market place we are concerned about and would like our readers to be cognizant of.