I'm an English language teacher in Spain who happened to discover a few nasty things about Tesla Motors. I'm paid by no one other than my students and my financial position won't be affected at all by swings in Tesla's stock price - or in any other stock. I like to annoy people with my unsolicited opinions on a range of matters. Apparently a considerable number of folks like what I write.

In this post I will consolidate the main evidence and data regarding how much Tesla's cars use Supercharging.

How many cars are we talking about?

More exactly, we're interested in the number of car-months that go by in any given period of time; 1,000 cars sold in December will not have the same consumption as the same amount of cars sold throughout the year.

For simplicity purposes I assume every Tesla auto can Supercharge and is on the road; notice that this will underestimate the per-car consumption figure. In this table I show the cumulative Model S and X deliveries at the beginning of a quarter, per-quarter deliveries, and the number of car-months elapsed. The last figure is calculated by assuming that, if a car is delivered in a given quarter, then it spends on the road 1 month during that same quarter. (If cars were delivered uniformly throughout the quarter, of course they'd spend 1.5 months on the road. But Tesla tends to make a push for deliveries in the last month). 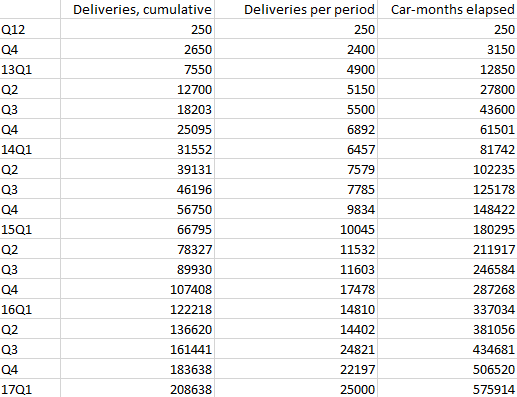 How many kilowatts is that?

Here I will simply list a series of dates and the cumulative consumption reached by then. Please note that some of the dates may be a bit off; oftenI simply wrote down the day when somebody posted this photo on Tesla Motors Club, but now I don't have the links so I may have made a mistake while doing that. Anyway, we don't need to know the exact day in order to get an idea. Plus one can eyeball the approximate date most times, or check the number of stations open at any given time to make sure it's in fact the date I say, approximately. 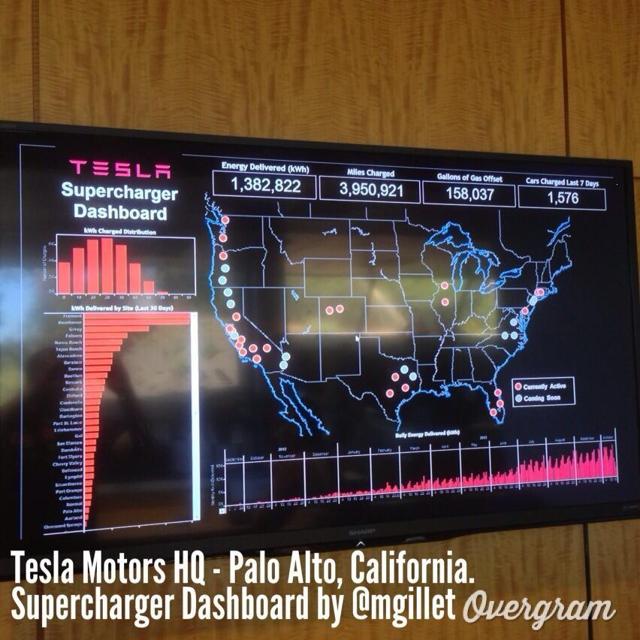 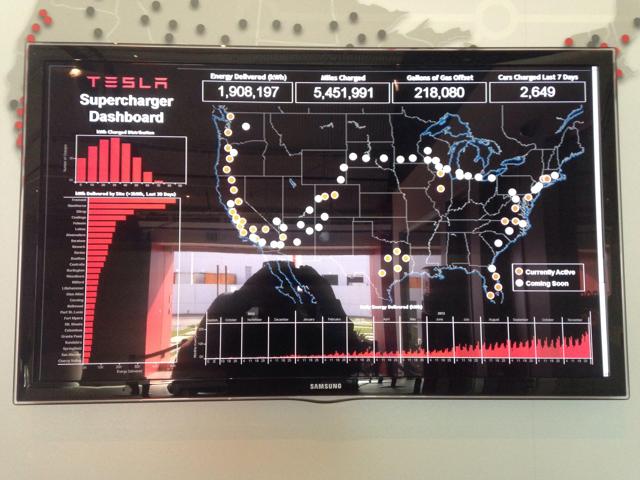 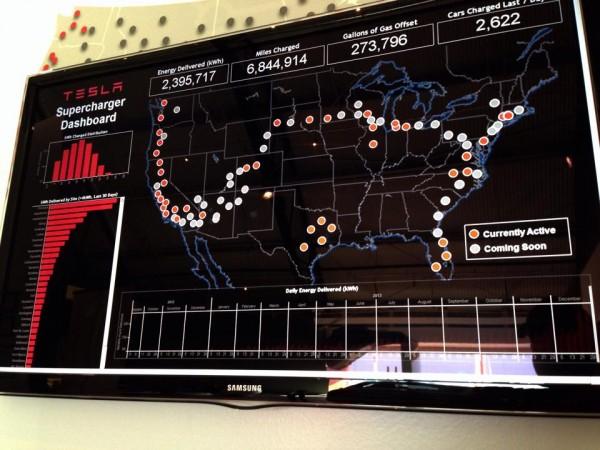 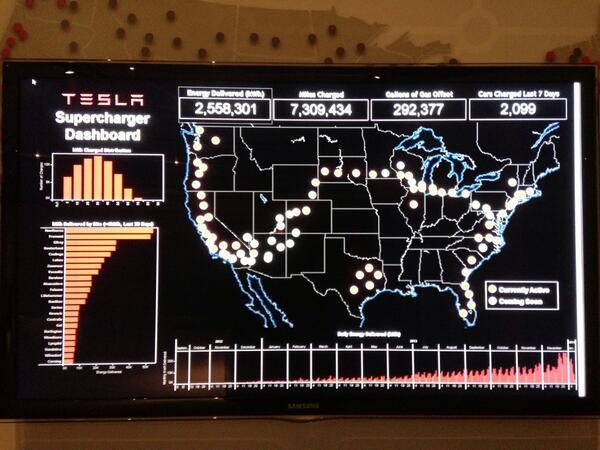 January 21st, 2014: 11 million kilometers, i.e. 6.83 million miles. This suggests 2.28GWh, or less, if Tesla assumes a rate of kWh per mile greater than 3. I'm a bit at a loss to see how this squares with consumption that had already reached 2.5GWh earlier in the month; my guess is that the press release used outdated info or otherwise got something wrong. 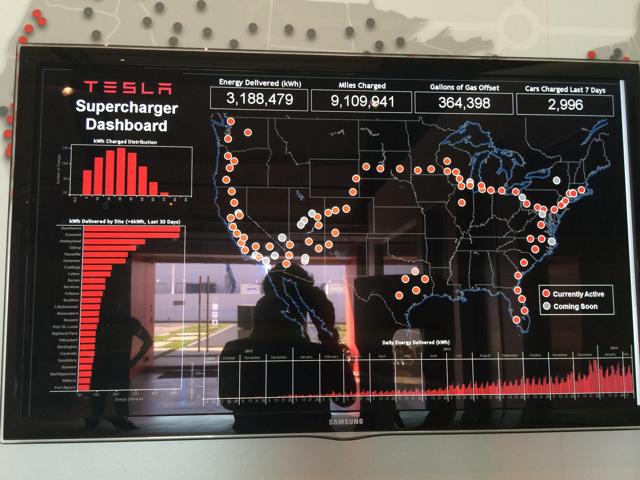 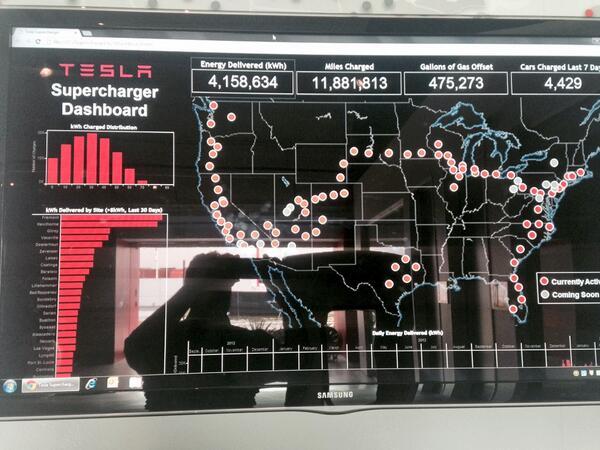 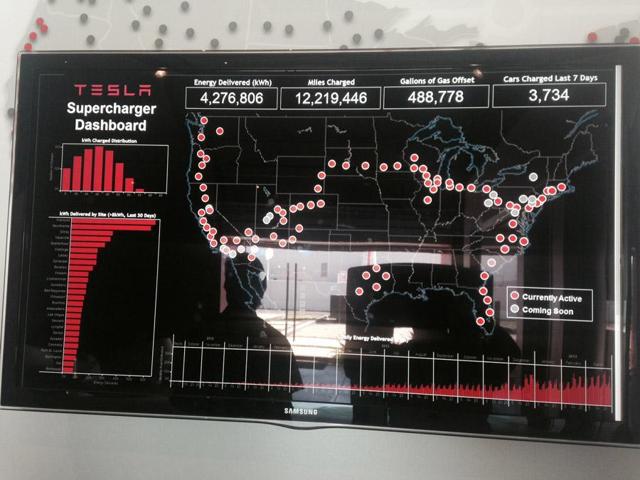 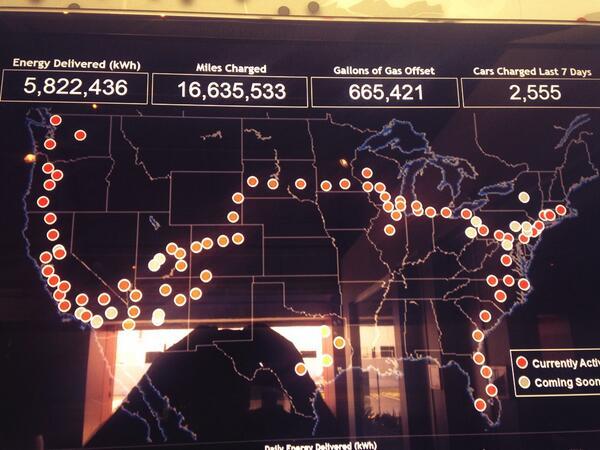 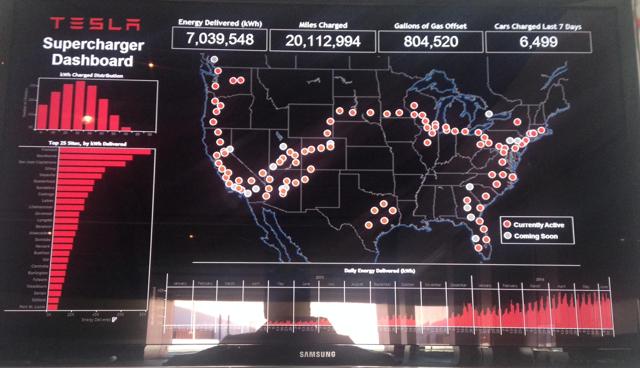 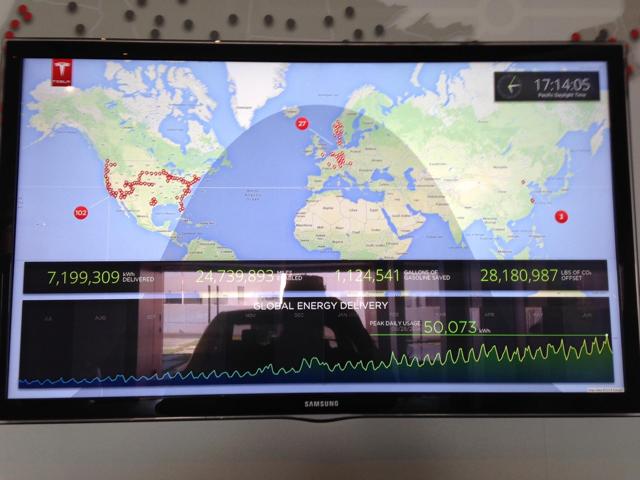 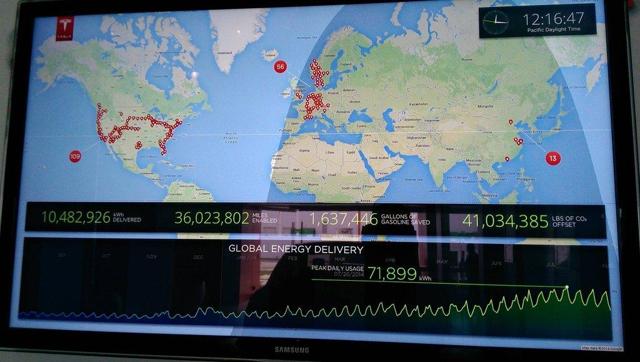 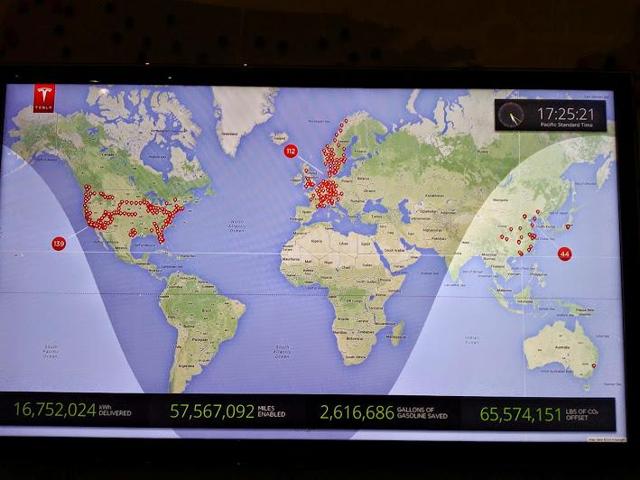 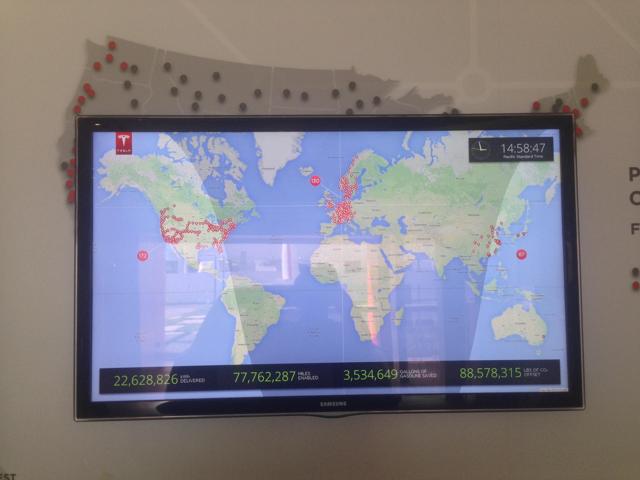 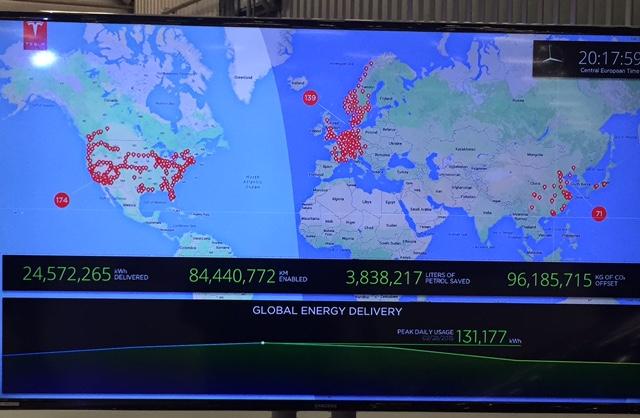 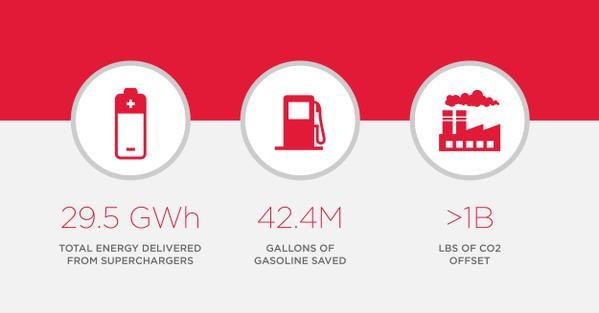 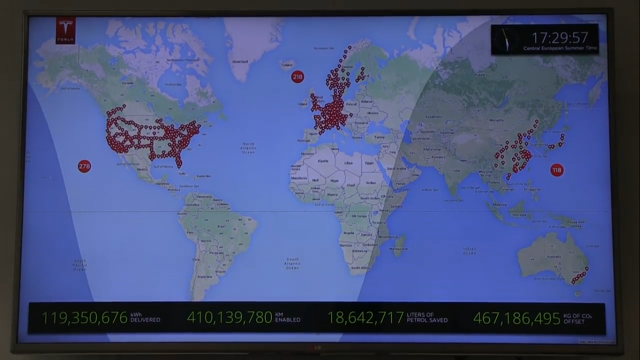 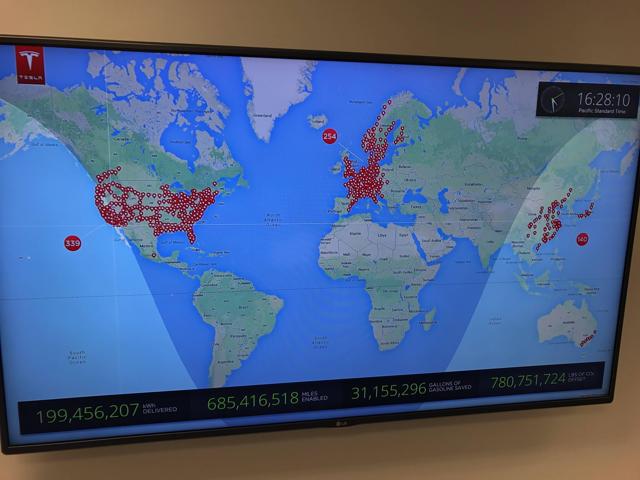 So how many kilowatts per car?

Analyzing every period is more than I'm willing to do for free. Let's instead focus on the most recent, which is also the most relevant.

Between April 29th and November 20th, cumulative consumption rose by 80.11GWh. Now, calculating the number of car-months is a bit more complicated - but in the end, different assumptions don't make much of a difference.

For the third quarter we simply take the number of car-months elapsed, 509,144.

For the most recent period, covering April to November 2016, the average Tesla on the road consumed the equivalent of 1,000kWh of Supercharging per year. This is a small increase from the 976kWh I estimated for the previous period and may signal a stabilization in per-car Supercharging consumption, which had risen strongly in every previous period.

It's easy to see why the figure would stabilize. Even accounting for (or assuming) a 10% loss in AC to DC conversion, this power is enough to provide about 2,700 miles worth of Supercharging per year (900kWh times 3 miles/kWh). Assuming average usage of 12,000 miles a year, that means 22-23% of all Tesla miles in the period were Supercharged. My guess is the average is driven up by some users (people who live in condos, Uber drivers, etc.) and the median user Supercharges only 10-15% of miles. But that's just a guess.

As always, there is some uncertainty regarding this data. Nevertheless, I believe the uncertainty suggests higher consumption than I presented:

a) I assumed the Supercharger consumption figures reflect AC taken from the grid, i.e. the chargers' input. If instead they reflected their output, or DC fed to the cars' batteries, then consumption from the grid (which is what Tesla pays for) would be about 10% higher.

b) There is evidence that Tesla's global statististics don't include mobile Superchargers. We know this because the Hawthorne station, which was perennially in the top 10 of busiest sites, does not show up in said top 10 in screenshots dated October and November 2014. It just turns out the station was being enlarged, and while construction took place Tesla used mobile Superchargers to avoid disrupting service.

c) I assumed that every single Tesla can Supercharge. Okay, this is probably close enough not to matter; the only ones that cannot Supercharge are the 40kWh Model S, plus a handful of 60kWh units.

d) I assumed all cars delivered were 'on the road' in every quarter. In reality some (thousands of?) deliveries have been totalled. At some point I or others will have to factor in attrition, so as to get a more realistic estimate of the number of cars on the road.

That's all for now. If things go well I'll post a more in-depth take on charging economics in a few days.

PS: the photos of displays showing global consumption come from Tesla's service stations in Hawthorne, Rud/Oslo and Dublin (California). It seems the one in Hawthorne was turned off in early 2015, but I believe the other two are still active. So if you can take a look, do so; the company has pretty much stopped disclosing info on Supercharger consumption and these screenshots are the only source of info left.