InTheMoneyStocks.Com is a research and consulting company focused on mathematical proprietary techniques along with a key understanding of price, pattern and time. Through understanding geometry and other technical analysis methods, InTheMoneyStocks.Com prides itself on avoiding Wall Street hype while calling major and minor moves in the DOW, NASDAQ and S&P, commodities, currencies and stocks. Mission Statement: Our goal is to provide accurate and precise market guidance without the Wall Street hype.

The SPDR S&P 500 ETF (NYSEARCA:SPY) is pushing through a double top from last week at $141.86, +1.14 (+0.81%). This is a new 52 week high, a level not seen since 2008 in the markets. Today was expected to be a standard float higher in the markets. This was based on the first day in the second quarter 2012. Generally, during a bull market, the first day of a new quarter will see some solid money flow into stocks

The move higher in the markets is being driven by the dollar. As the Dollar drops intra day, the markets move higher. This inverse relationship has been in play for years now. Last Monday, the markets had the same type rally on hot air from Ben Bernanke. They then sold off over the next two days to negate that move. It will be interesting to see if this happens again this week. 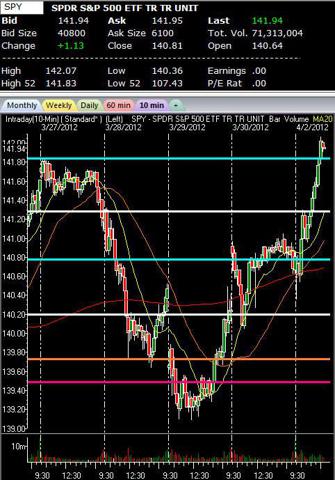