In the 1990s, I wrote a book on how the 80 year pattern of revolutions in paradigms in physics causes the long-wave of economic depressionary periods. Models were explained in the book that show why paradigms change every 80 years or so, and how these led directly to the pattern of economic depressions. See the Letter to the Editor sent in December of 2008 about the coming depressionary or deep recessionary period. http://cust38.metawerx.com.au/LewisLetter79.pdf I did a lot of research on ball lightning phenomena in lenr/cf experiments, and have been publishing articles in the ICCF proceedings and in small magazines and journals such as Journal of Condensed Matter Nuclear Physics and Infinite Energy. Recently, on the news, Cold Fusion is said to be "Hot Again." The research of several groups or firms was discussed, but there is much that has been discovered that wasn't discussed. I have a lot of ideas about the role of these micro ball lightning in these experiments. I think that this depressionary period will last at least until 2015, since the prior economic depressions like this one both lasted about 7 or 8 years. Labor poductivity growth rates in the technology leading economy should be very high during the next two decades if the model is accurate. More than 2.7 percent on average.
Economic Slump in the 2010s and the Theory About It
This current deep economic recession period or economic depression is happening now because they happen at about 40 year intervals. Long depressions or deep and long recessions happen at 40 year intervals because industrial revolutions happen at about 80 year intervals (See Chart 1). They happen at about 80 year intervals because scientific revolutions happen every 80 years plus or minus a few years (See Chart 2). Scientific revolutions happen at about every 80 years because the process of the development of a physics paradigm is a three step, three generation process that takes about 80 years to complete. In 1989, I described the theory for why scientific revolutions in physics is a three step process. The theory is comprised of several axioms called the “Inhibition of Apprehension,” the “Difference Between Theoreticians and Technicians,” and that there is a “driving mechanism” that causes people to do physics as fast as they can given these two limitations and some other limitations. In 1989 and 1990, I described how the regular cycle of the introduction of physics paradigms at 80 year intervals gives rise to 80 year periods of technological innovation and how this cycle of technological innovation is apparent in the 80 year-long waves of productivity growth in the advanced economies (See Chart 1). In the early 1990s, I drew up charts and tried to publish articles about all this, but didn't get published until 2004. In 1989 and 1990, I predicted that the next 50 years of economic development in the most advanced economy would mirror what happened during the similar stages in the development of the economies of the US in the 1900s and Great Britain in the 1800s. In particular, I predicted that there would be a sudden jump in productivity growth about the year 2000, that productivity would continue to increase during an economic boom in that economy during the decade of the 2000s, and that an economic depression period similar to the Great Depressions of the 1930s in the US and the 1830s and 1840s in the US and Great Britain would begin about the year 2010 and continue about seven or eleven years. This current depression or deep recession period started about 2008, so the theory developed in 1989 has proved correct for about 20 years now. In this article, I'll show some charts I made, talk about cold fusion a little, explain why it is happening, and warn about the deep economic recession or depression in the next few years. 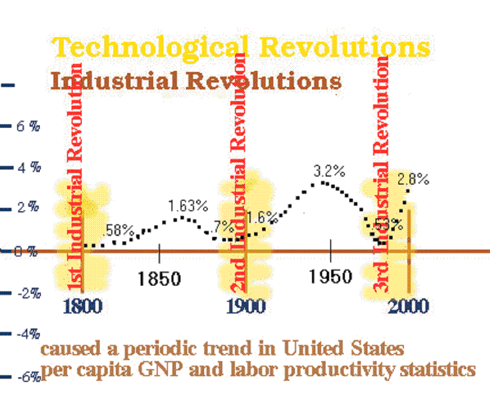 Chart 1 (The yellow areas are when there were technological revolutions.)
Unemployment, Foreclosures, Bankruptcies Up
During the next few years, unemployment should continue to rise, there will be a lot more bank failures, more financial crises, and more defaults, bankruptcies and foreclosures. The process of oligopoly formation in each industry will continue. The word "oligopoly" means that a few firms or just one firm dominates an industry. Companies will focus on process innovation (making products efficiently) and corporate survival and try to merge with other companies or buy out their rivals. By attaining economies of scale, companies can produce products at lower prices and undercut their rivals for selling standardized products. More people will be laid off. The official current unemployment rate is about 9.9 percent in May of 2010 while I am writing this, but people say that the real unemployment rate is actually much higher. During the next few years, corporations will focus on automation of production and efficiencies of scale to produce lower cost standardized goods. This means more people will be unemployed or that their pay or hours will be reduced as machines replace them and companies go bankrupt or are bought out and redundant labor is terminated.
Consumption and Overall Production Down
Consumption will decrease. The US savings rate apparently went up to a high of 5.4% in the second quarter of 2009 from a low of 1.2% in the first quarter of 2008.  After the deep recession started, consumers stopped spending so much and the savings rate rose a lot. But during the last year, the savings rate has decreased to about 2.7% again in May of 2010 as there has been more consumption. However, the financial troubles and the increase of unemployment, combined with the little available savings means that there will be less consumption. Perhaps by the summer or December of 2010, the situation will get a lot worse. In 2009, the major world economies went on a big spending binge, even subsidizing people to buy cars as the US and China did. The governments rescued failing companies and banks with trillions of dollars of government spending or direct support and gave a lot of people money or made jobs for them. I don't know how long the big government spending in the US and the other advanced countries like Japan, Finland, Sweden and Germany can continue.
“Technological Acceleration” is the Cause
The depression is due to a process I call “technological acceleration” in which the focus of industry switches from product innovation to process innovation. I believe that this switch in emphasis happens simply because a paradigm's technological innovation is played out about 20 years after an industrial revolution. This happens because a physics paradigm has a limited potential of technological innovation. A generation with a given paradigm can only invent a limited number of useful kinds of products that people would want to purchase. In the case of the Quantum Mechanics paradigm, the 3rd Industrial Revolution can be dated as starting in 1982 when the deep recession period ended, and about the year 1999 or 17 years later most of the Quantum Mechanics-physics based inventions had been discovered and there was a multiplicity of small companies in each industry. There were a lot of small companies and medium sized companies competing on manufacturing products that had become standardized. This meant that the companies had to focus on cutting prices, buying equipment for automating production and enlarging their production facilities, on advertisement, and on buying out or merging with rivals. All this cost a lot of money, and the companies borrowed a lot. Consumers also borrowed a lot and started to use credit cards to buy all the recently available nifty things like home electronics, PCs, computer accessories, internet connections, cell phones, satellite receivers, wide-screen TVs and computer monitors and etc. All these products had recently become available.
Decade of the 2000s Economic BOOM
In 1989 or 1990, I predicted that there would be an economic boom in the leading economy due to the production and consumption of new QM based products. There was. I predicted that as happened in the 1920s in the US and the 1820s in Britain, both consumers and corporations will reach record-high levels of debt. They did. I predicted that the process of oligopoly formation and automation would mean that people would be unemployed and disemployed while labor-productivity growth that derives from this would continually increase until about 2030. This has happened so far too. Productivity is increasing gradually year by year in a long secular increase since the start of the technological acceleration. Productivity growth acceleration period is another term that could be used to describe the period around the year 2000. While productivity went up much, as happened in the 1920s in the US, labor wages increased little (See Chart 1). 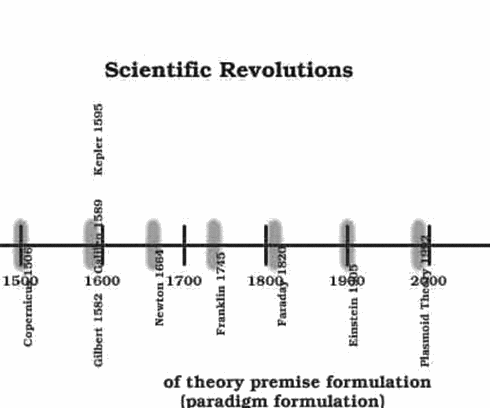 Chart 2 (See how the physics paradigm formulators’ work is spaced about 80 years apart? From Copernicus to Einstein is 499 years, almost exactly 5 X 80 = 500.)
Increasing Productivity Growth Until About 2030
During the next few years, unemployment will increase. However, productivity growth will continue to increase as well, mirroring what happened in the 1930s in the US (See Chart 1). There will be a lot more home foreclosures breaking previous records. There will probably be a lot more bank closures and companies going bankrupt or being absorbed or merged. Of course, this will directly increase unemployment as well, unless the governments hire millions of people. So in general, we can expect that the current depressionary period will last at least another five years, unemployment will go over 10 percent and maybe even go higher than in the Great Depression, and unless somehow housing is provided for people, there will be a lot more homeless people.
Theory of Industrial Revolutions and Economic Depressions
The reason that industrial revolutions happen at about every 80 year interval is because they trail the introduction of their physics paradigm by about 55 or 80 years. In the case of the Franklin Fluid Theory paradigm, the First Industrial Revolution lagged by about 55 years. In the case of the Faraday and Classical Field Theory paradigm, the lag was 80 years until the 2nd Industrial Revolution. In the case of Einstein and the Quantum Mechanics Theory paradigm, the Third Industrial Revolution trailed it by about 77 years. When industrial revolutions happened, there were long-term, deep recessions or depressions in the 1780s and 1790s and the 1970s and early 1980s. These depressions are associated with stagnating productivity growth rates during the industrial revolutions. And when the technological acceleration period sets in after that, another kind of depression associated with high productivity growth begins about 29 years after the beginning of the industrial revolution or 1829, 1829, and 2008. These charts that I'm showing I made early in this decade, about 2002. I didn't just make it up (See Chart 3). 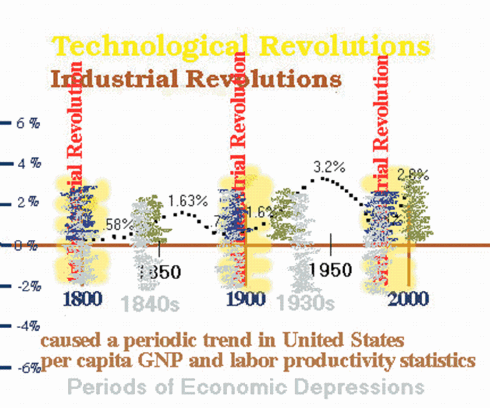