From within an interesting Facebook thread and in commenting on the video below, I made a statement, that: There is what I feel is a 'major' mistake made (in the 1st 4 minutes of the video), and I'm wondering if any member can tell me what I feel that 'mistake' made, is? Facebook Thread: tiny.cc/c6fokx

Martin Sørensen asks: "I'm getting very curious as to what is the major mistake made in the video."

Well Martin... This is my 2nd attempt. My 1st on FB simply 'vanished' when my computer shut down mysteriously. 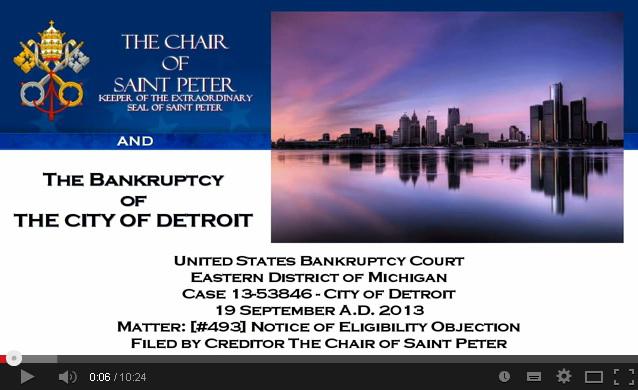 4) 'THE CITY OF DETROIT' is a device created by the Trustees and the Administrators, Guardians operating under the jurisdiction of the Roman Curia - who have tricked the people into 'pledging' their property to be used as collateral, which has fraudulently converted the true Creditors into debtors reducing the true Creditors to the status of insolvent paupers having no rights.

I feel that it's almost as good as disinformation of the kind that has spread so wide and far - and it has been so readily been accepted by all - when passed on from those considered as being "guru's" in the FREEdom activist area. I feel you will read this here, as a world 1st.

Those words: "operating under the jurisdiction of the Roman Curia"

Under the jurisdiction of the Roman Curia? I don't think so.

The group's Admin Team leader Gary and I have discussed this a number of times and I am now more than convinced that this is so wrong and I'll try and explain why this is so.

In a previous post I commented that ....... In regards to "Fictio" (or, the fiction of law), jurisdiction only comes from our own consenting to being the NAME - and that this (in itself), is so 'regular' a happening, these days. There's that need to have us CONsent to the NAME.

Who is it that we are 'coerced' into consenting to-who do we have a need for them, to have us understand them? (Police, magistrates, men/women contracted to Council, Bank Card operators, men and women telephone operators/payment of accounts for Telcos, Power Company suppliers, etc.) Yes, they all have a need to get us to be 'the NAME'.

All that operate this 'fiction', do so UNlawfully.

This fact (in itself), has been hilighted by Anna von Reitz with (besides personage) "barratry" - the crime of knowingly bringing false claims into court.

All corporations in the world are "registered" within Rome. As such, they all come under the vatican 'corporate' umbrella. The Holy SEE is the "Legal" owner of all the corporations. (Trusts.) All dead entities.

As such (and, under this corrupt UNlawful 'system' of law that exists in the corporatised world that we are in), a corporation can only 'talk' with another corporation - such is the ('pretend' or, a 'discolouring' of the) law that those men or, women (as mentioned) 'acting' on behalf of the (corporate) Trusts involved, do need we (living flesh and blood men/women), to CONsent to being their (trust) NAME. Or, speak or 'give evidence on behalf of' this dead fiction Trust NAME. 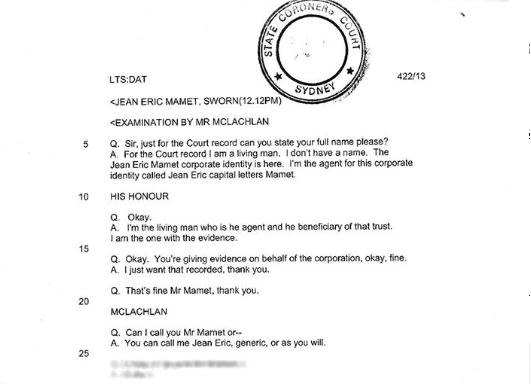 [Beside a number of other matters] ... The Magistrate was clearly able to advise the 'witness' that he was giving 'evidence' on behalf of the corporation (the very NAME) and this advice went, unrebutted.

It's clear I feel that whilst non-competent justices/judges (those court officials, administrative clerks, magistrates, etc) operating down in the lowly Statute level of a 'fiction world' jurisdiction that is described at best (and, for expediency), as doing so, all under the 'colour of law'...that can now be so easily be proven as being all UNlawful.

Here's the 'kicker' - The 'Lawmaker' himself has said so, too. (Bare in mind that this blogpost started off under the premise that Trustees and Administrators of the corporate Trust constructs are "operating under the jurisdiction of the Roman Curia"?)

And the 2IC (I feel) to Pope Francis in his presentation of the motu proprio (he's the Secretary for Relations with States) Abp. Dominique Mamberti has put it like this:

.....,"One of the cornerstones of the system introduced by this law is constituted by the so-called rule of law, as a result of which administrative sanctions may be imposed only in cases defined by law."

We live in most interesting times, we certainly do. The 'race' is on, with various 'factions' of the United Nations flexing their muscles.

For mine, I'd be putting my money on the 1st ever Jesuit Lawmaker, that the world has seen. He (Francis) 'looks the goods', for mine.

Thirty years A Lawyer, she [claims she] has served as an International Services Agent and as a private attorney in service to his Holiness Pope Benedict XVI and now, Pope Francis.