Oil has sold off recently, but it's not enough to go long.

Oil's financial market positioning is still too bullish, which is a bearish factor.

This article was originally written for ANG Traders subscribers on Saturday, January 18th.

Oil was mostly flat the week of January 13 - January 17, and the broad market continued to grind higher. Oil is in a unique situation in that the technical risk is largely gone in oil, but the broad market positioning suggests a euphoria that has been very rare since the financial crisis. This creates a risk for oil. 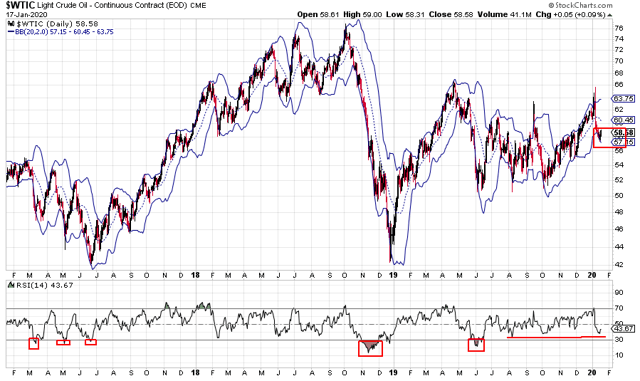 The above chart is the 3 year daily chart on WTI. Technically, oil is in a tempting position here. Only 5 times over the last 3 years has oil moved markedly lower on it’s RSI (red rectangles). That means that it is very rare for oil to move lower once it has sold off like it has over the last two weeks. Also, WTI hit it’s lower bollinger band and then consolidated. That is a sign that I look for in the bottoming process. These momentum measures suggest the technicals are bullish in oil. 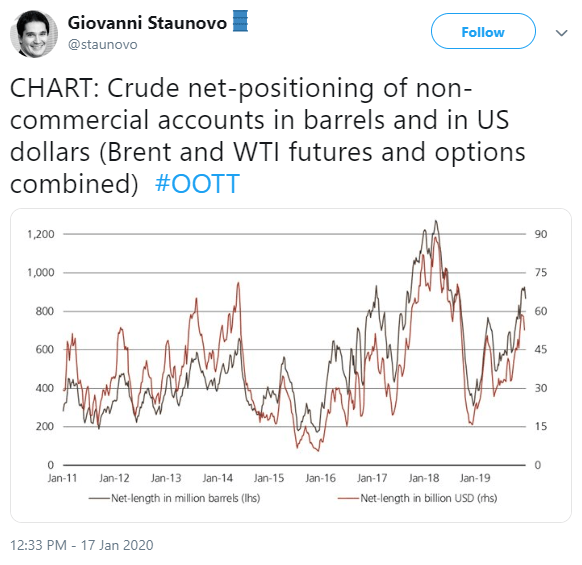 Giovanni Staunovo’s above tweet shows that crude positioning is still relatively bullish according to COT Data. This bullish positioning is a bearish factor in WTI. Fundamentally, buyers and sellers are what move markets. The above positioning shows that many traders are still long WTI. This means that there are many potential sellers and relatively few potential buyers that could drive up the price. As can be seen from Giovanni's tweet, there was only one period (2018) when there was more net long positioning making it unlikely that more buyers go long WTI in the short term. It will take multiple bullish factors to push oil higher in the short term due to a lack of potential buyers. When considering the risk reward dynamic, it is prudent to buy an asset that has many potential buyers opposed to many potential sellers that could drive down the price.

Oil’s singular biggest risk is the broad market's over-extended technicals. That does not guarantee a sell off, but it means the risk is there. 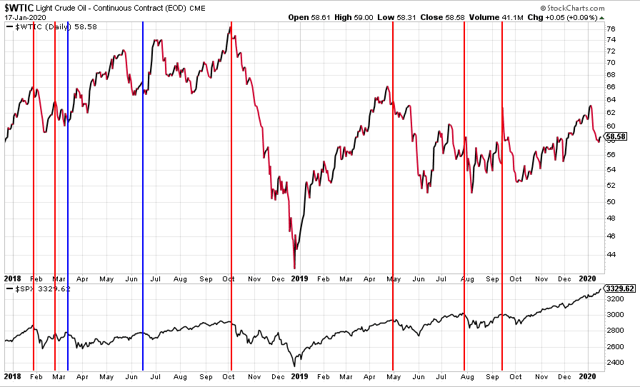 ***Chart Redacted here as it is solely for subscribers***

The chart that was in this place had data that suggests the broad market had an 83% chance of selling off in the short term. As oil has sold off with the broad market 75% of the time over the last 2 years, I think this is a trump card and is the largest reason why I won’t be taking a levered long position in oil.

In summary, WTI’s technicals are bullish, it’s financial positioning is bearish, and the broad market is a bearish factor. WTI is nearing a position whereby the risk reward dynamic will merit a levered long position, but in my estimation we aren’t there yet.

If you would like real time updates on my oil trades and more insight into my oil trading strategy, please subscribe to ANG Traders: Away from the Heard (ANG Traders's Articles). As far as recent real time oil trades go, I recommended going long oil on September 30th and recommended shorting oil on January 7th which are indicated by the blue circles on the below chart.

Additionally, this blog post was initially submitted as an article on Wednesday, January 22 (it contained all of my original charts including the one I redacted for this blog post), but SA deemed that the submission did not meet their standards and rejected it.