The Oil & Gas Investments Bulletin (http://www.oilandgas-investments.com) is an online subscription-based service that finds, researches, and profiles growing oil and gas companies that have high growth rates (or high growth potential.) Its team of writers work under Keith Schaefer, Editor/Publisher, who shares his knowledge of the oil and natural gas markets in a simple, easy to read manner.

The Oil & Gas Investments Bulletin has a close association with another Seeking Alpha contributor Investing Whisperer.

I know that everybody hates coal.

I know what you’re thinking—they get paid good money to say things like that. But I’ve taken a look into the numbers and I agree. Even though spot met coal prices dropped 30% recently, CCR has contracted prices through the end of next year that make this yield very sustainable. 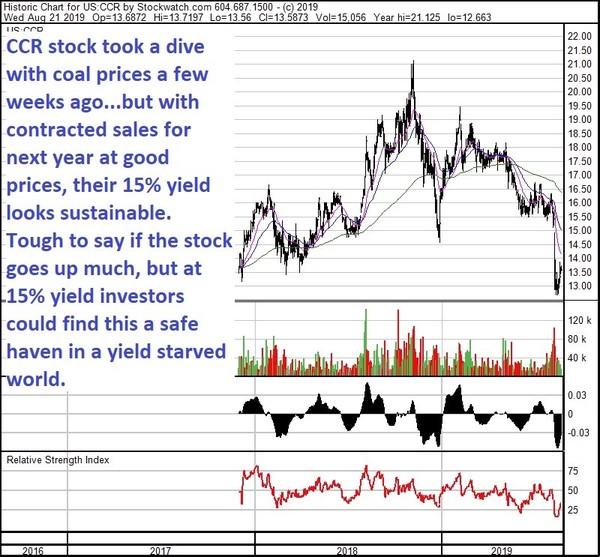 And savers and investors are absolutely starved for options that provide income – especially as sovereign rates around the world go negative.

The safest long-term investment on the planet is meant to be the 30 Year U.S. Treasury – but it’s only yielding 2% – an all time low. 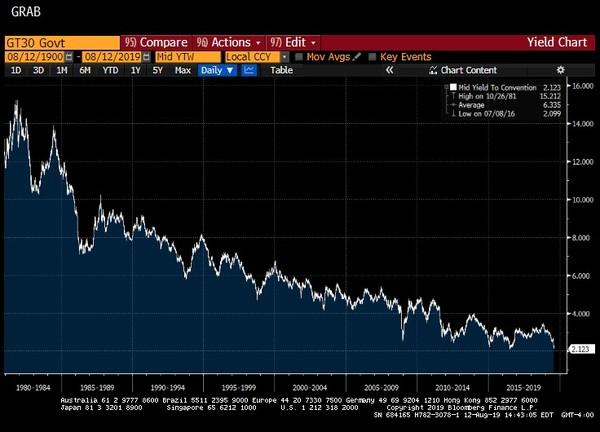 Treasuries hardly provide any income – today they are a place to park money for institutions that have no other option.

They aren’t for investing or for income.

If you think that bonds are the answer for income a person could always look to corporate or even junk bonds.

Junk bond yields do not nearly compensate for the risk involved.

I just saw a small-cap homebuilder offer 7 year unsecured bonds that have a yield of 4%. That is where we are… a small-cap company in a heavily cyclical business can borrow at 4% on an unsecured basis.

I’d rather stick my money in a tin can and bury it in the backyard.

Perhaps we can travel outside of North America and buy some safe Government bonds with a decent yield.

More than a third of bonds that trade globally now have NEGATIVE INTEREST RATES.

I saw an article where a bank in Denmark is even offering a negative rate mortgage – sign me up for that one please….

This is a bizarro world where the borrower has to pay the lender for the privilege of lending him money.

Outside the world of bonds… blue chip dividend paying stocks are no better.

The stock prices on the best businesses on the planet have been bid up so much that the dividend yield on the S&P 500 is now just 1.88%.

That isn’t an income stream… that is a dribble.

This week I read a note from Goldman Sachs that confirmed what I already believed.

Cyclical companies with abnormally high dividends are out of favor (just look at the MLP space in the US!).

According to Goldman the valuation gap between high and low dividend stocks is the widest it has been in 40 years.

Well… they don’t come with a much higher dividend than Consol Coal LP’s 15.4% current yield.

With a yield that high the market clearly is pricing in a dividend cut.

The analysts that follow the company don’t agree – they think it is sustainable for at least the next three years.

He publicly predicted the collapse of Lehman Brothers months in advance of its happening by documenting holes in the bank’s accounting.

He has also compounded money for two full decades at a rate of almost 15% annualized.

When I did some digging I found that Consol’s distribution looks pretty secure too.

Consol Coal LP owns a 25% interest in the Pennsylvania Mining Complex (PMC). The other 75% of PMC is owned by Consol Energy (CEIX) which also serves as operator (and owns 60% of CCR’s shares).

There is absolutely no disputing that the PMC is a world class coal asset.

These are three low-cost, modern and non-unionized mines that operate in close proximity to the East Coast utilities that purchase from them.

The coal itself is also highly desirable with high heat and low sulphur content.

Higher heat means more energy, and lower sulphur reduces the costs to burn the coal, making it more attractive to utilities. The mines have the capacity to produce up to 28 million tons a year for a long time without needing to spend much cash to keep production going.

Consol has aggressively pushed costs down in recent years with the implementation of zero-based budgeting (where every expenditure has to be justified rather than starting with a baseline budget).

Northern Appalachia coal currently trades for just under $50 per ton.

For CCR’s distribution that coal price works just fine. The coverage ratio in Q2 was 1.2 times. Net leverage is only 1.6x. And by the way, with only 16 million shares out, any increase in natgas prices would see this stock go WAY up. (Coal prices compete against natgas.)

The current quarterly distribution of $0.51 has been in place since the beginning of 2016. The price of Northern Appalachia has been between $40 and $50 per ton for much of that time – never lower.

For all of 2017 coal prices were similar to where they are today and CCR’s dividend held.

What has the market concerned is that the current trend for the price of coal is down. But given that the price hasn’t been sub $40 in more than a decade those concerns for the next couple of years seem probably overblown.

Especially since coal inventory levels are actually on the low side. As of the end of May U.S. electric power sector coal inventories were lower than they have been since 2014.

Further securing the near term distribution is the fact that 95% of 2019 and 80% of 2020 Consol’s coal sales are already contracted with customers… more than half of which locks in better pricing than the spot rate today.

For the very long-term however the crystal ball is cloudy. And the risks are clearly higher.

Shale gas has taken a huge chunk of coal’s market share. In 1997 53% of electricity in the United States came from coal – last year the number was 28%. Coal and natgas pricing are competitive – so if natgas prices keep going lower, coal could too.

However, I would point to two factors: One is that coal producers are much smarter at shutting in production than natgas producers. Two is – as I said, CCR has contracted prices for the next couple years.

With its low cost production Consol is going to be one of the last men standing – but if the natural gas producers keep pushing prices down everyone is vulnerable.

Perhaps even worse, if a Bernie Sanders or Elizabeth Warren type nominee comes out of the Democratic Party and wins… then some radical measures targeting coal could arrive very quickly.

Which creates uncertainty – which of course the market hates.

Economically, that 15.4% yield that appears quite sustainable for the near term. Politics could undo that next November. (Love him or hate him, I’ll bet a steak dinner Trump gets re-elected though.)

So there are definitely risks involved in owning CCR – but IMHO nowhere near the risk that a 15% yield is pricing in.