Most people who look at candlestick charts, focus only on green/red candles or the filled and hollow candles. Very little attention is paid to the crisscross lines that are interspersed within this array of green/red candles. These thin lines are as important as full-bodied candles and sometimes even more important when it comes to predicting the future trend of the security/index in question. They are known as DOJI.

Although we have covered candlesticks in our previous issues, here is a brief refresher.
In a classical candlestick chart, every candle represents four basic things, Open, High, Low and Close of a session. The rectangular or cylindrical part of a candle is known as the body. It may be hollow (white) or filled (black or red).

A doji is a candle that is formed when a security's open and close are the same or nearly the same. The prices may move above or below the open price during the trading session, forming highs or lows. But by the end of the session, the price closes at or very near to the open price. Since the open and close are so near or at the same level, the body of the candle is very small or sometimes just a thin line. Doji has no colour.

Although dojis are considered as classical reversal patterns, in reality dojis are basically neutral candlesticks, which indicate indecision. After opening, the bulls and the bears exerted their forces, but at the close of the trade, the prices closed near or at the open level, indicating that neither party were able to gain clear control.

This indicates that the strength of the momentum is weakening, which more often than not leads to a reversal. But doji can also indicate retracement or a mere pause in the trend. Dojis by themselves do not give much information, but when studied in context of the stage of the market in which they occur, i.e., oversold or overbought, or at crucial support or resistance levels, etc, can give valuable information.

Since the open and close are virtually at the same level, and the body of the doji is usually a thin line or just too small, it is the length of the upper and the lower shadows (wicks) that give rise to different doji patterns. 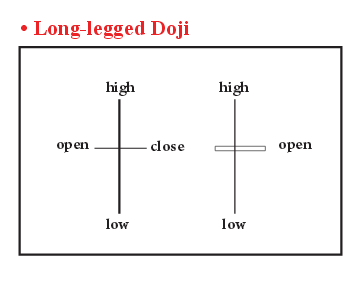 A long-legged doji is characterized by long upper and lower shadows. It looks like a cross. This type of doji represents a greater deal of indecision in the market, wherein the prices traded well above and below the open but by the end of the trade closed virtually at the level of the open. It suggests that demand and supply are nearing equilibrium and shift in trend may come soon. The close is very important. A close below the midpoint of the candle shows weakness; a close above the midpoint indicates strength.

A dragonfly doji forms when the open, high, and close are the same and the low creates a long lower shadow. In other words, after opening, the sellers pushed the price significantly down during the session. But by the end of the trade buying pressure emerged and pushed the prices back up to the Opening level and closed there. Since the prices never moved above the opening price throughout the session, there is no upper shadow and the resultant candle looks like a "T", i.e., no upper shadow and long lower shadow. 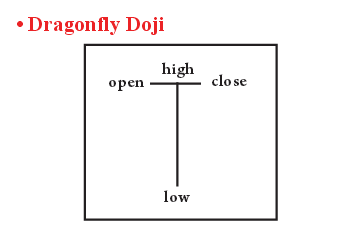 Dragonfly dojis are fairly reliable bullish patterns. This pattern helps traders visualize the level at which demand sets in and where the support is formed (indicated by the low point of the lower shadow). A dragonfly doji that forms after a significant down move, usually signals that the downtrend may be stopping and a reversal may be forming. However, dragonfly doji should always be used in conjunction with other indicators such as an upward break of the downward trendline. 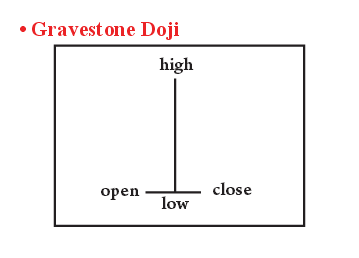 A gravestone doji is exactly the opposite of a dragonfly doji. In that open, low and close are the same and the high creates a long upper shadow and there is no lower shadow. In other words, after opening, buyers pushed the prices significantly higher during the session.

This is a fairly reliable bearish pattern, which helps traders understand where the stock is facing resistance and where the supply level is. This is indicated by the high point of the upper shadow. A gravestone doji that occurs after a significant uptrend is a signal that the uptrend may be over and a trend reversal is round the corner.

However, it should always be used in conjunction with other indicators such as a downward break of the upward trendline.

A four price doji is simply a horizontal line with no upper or lower shadows. it indicates that all four, open, high, low, and close of the session were at the same level. The four price doji is usually found in securities that are highly illiquid, where there is either no trading or very little trading during a session. For this reason, four price dojis are quite rare.

Sometimes multiple dojis are formed in a short period of time. This is nothing but an extension of the indecision phase of the markets. It is usually found before a significant news event such as elections, budgets, etc are announced.

Traders know that the event is big and can have a significant bearing on the markets, but are not sure whether the news flow will be positive or negative, and, hence, are reluctant to take prices higher or lower. Usually after such multiple dojis, investors can expect a strong breakout in any one direction.

HOW TO TRADE DOJI

The timing or the stage at which a doji appears is very important. If the stock is in the early stage of an uptrend/downtrend, it is unlikely that a doji formed would indicate a top or bottom and may not indicate a reversal. It may just indicate a pause/rest period after which the trend may continue. However, a doji that appears after a prolonged upmove or down move has a strong chance of being a reversal signal.

Don't trade at the first sight of a Doji. Always wait for the next candle to appear before taking any action. If a doji appears after a sustained upmove, and the very next candle is a large gap-down red candle, one can go short confidently, i.e., a new candle close below the doji low would be a signal to go short. Place your stop loss a few points above the doji high, and set your target to twice the range of the doji candles itself.

If the doji appears after a sustained down move, and the very next candle is large gap-up green candle, one can go long confidently. Place your stop loss a few points below the doji low level and set your targets to twice the doji range. Alternatively, if the next candle after the doji forms in the same direction that the market/security had before the doji, it means that there will be no reversal and the doji formed should be ignored.

Thus, we see that doji is not a reversal signal by itself. To form a reversal signal, it needs confirmation in the form of the next or a next few candles that is against the direction that the market had prior to the formation of the doji.

Also, dojis should always be used in conjunction with other indicators. For example, a doji that appears at crucial support or resistance levels assumes greater importance. And dojis that form when RSI or stochastics are showing oversold or overbought levels are considered more reliable. 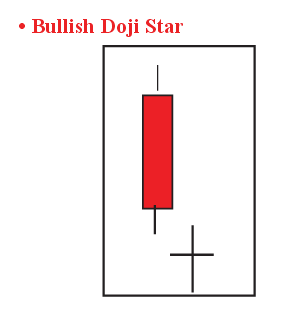 This is a bullish reversal pattern. A bullish doji star pattern is a double candlestick pattern, which consists of a long downward candle (red candlestick) followed by a doji candlestick that opens gap-down and opens and closes below the close of the previous red candlestick.

The long red candle indicates that the stock is in a downtrend. The next day opens with a gap-down, but trades within a small range and closes at or near its open. This is a sign that sellers are losing grip and buyers are regaining control. Smaller the doji candle, stronger is the signal. For confirmation of reversal look at a Bullish Morning Doji Star, or Bullish Abandoned Baby pattern, that will be discussed below. 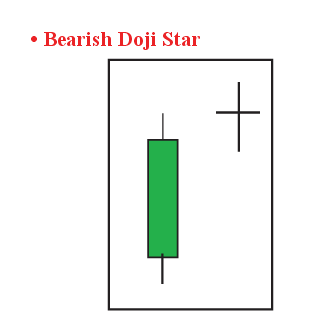 This is a bearish reversal pattern, that is exactly the opposite of the bullish doji star, i.e., a green candle followed by a gap-up doji. It signals the end of an uptrend. 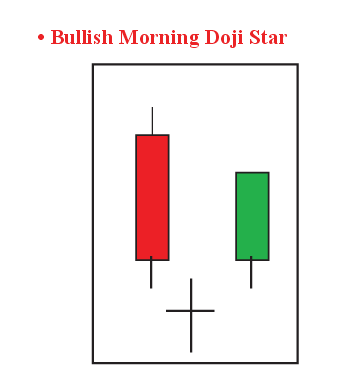 This is a bullish reversal pattern. It is a 3-candlestick pattern. It is the same as the Bullish Doji Star, the only addition being the formation of a third upward candle (green candlestick) that forms after the doji. This upward candle should open gap-up (above the high of the previous candle and close. Since the red candle followed by the gap-down doji already has signalled that the bears are weakening in the bullish doji pattern, the appearance of a long third up (green) candlestick confirms that the reversal pattern is indeed true. 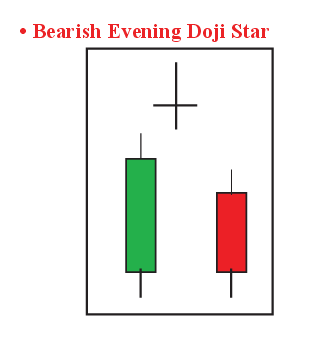 This is a bearish reversal pattern. It is exactly the opposite of Bullish Morning Doji Star, i.e, a green candle followed by a gap-up doji, followed by a red candle. It signals that the uptrend may have reversed. 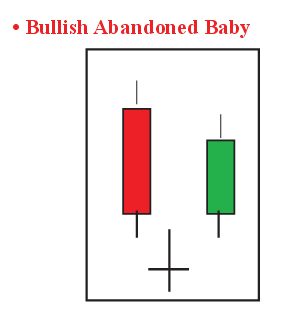 This is a bullish reversal 3-candle pattern. It is the same as the Bullish Morning Doji star, with the only difference being that the shadows (wicks) of the doji must also gap below the shadows of the red and green candles. This tool is used to confirm that the reversal is true. 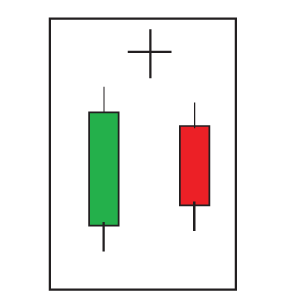 It is the opposite of Bullish Abandoned Baby. A green candle followed by a gap-up doji (above the shadows of the previous and next candle), followed by a red candle. This pattern indicates that the uptrend may have reversed. 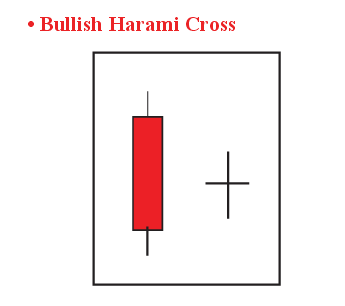 It is a bullish 2-candle reversal pattern. The first candlestick is a long down candle (red candle), which is followed by a doji that is fully contained (engulfed) within the body of the first candle. The first candlestick is a long down candle, which indicates bearishness. The next day, the prices open at or above the close of the previous day and end the day at the same level, giving rise to a doji that is totally contained within the previous candle. The bears feel that the downtrend is ending and rush to cover their shorts, which leads to a rise in prices. 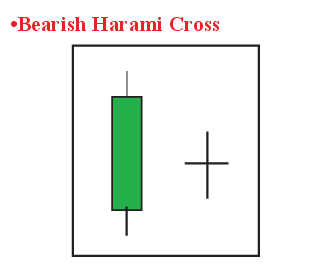 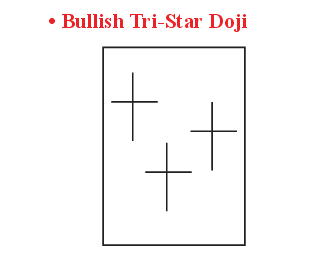 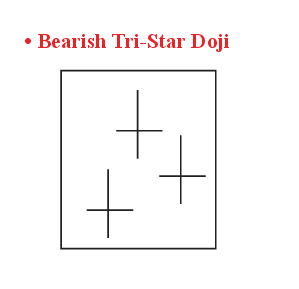 This is the opposite of Bullish Tri-Star Doji. After the first doji, the second doji opens gap-up, and the third doji opens gap-down. An indicator that the bulls are losing strength.

Dojis don't always mean reversal; they merely mean indecision. But one thing is for sure, whatever the stage, a doji candlestick means that the prior trend is losing strength and there is lack of momentum and hence one has to be vigilant.