Bill Bonner founded Agora Inc. in 1978. It has grown into one of the largest independent newsletter publishing companies in the world. In 1999, along with Addison Wiggin, Bill founded The Daily Reckoning. Today, this daily e-letter reaches over 500,000 readers around the globe. Bill has also co-written two New York Times bestselling books, Financial Reckoning Day and Empire of Debt. He has written or co-written other widely read books as well, and has penned a daily column at The Daily Reckoning for over 12 years. Recently, Bill decided to “retire” from his role at The Daily Reckoning and begin writing his Diary of a Rogue Economist. Bill Bonner’s Diary of a Rogue Economist is your gateway to Bill’s decades of accrued knowledge about history, politics, society, finance and economics. Sometimes funny, sometimes frightening – but always entertaining and packed with useful insight, Diary of a Rogue Economist can help you make sense of the complex world we live in today.

The U.S. is the place to be. That's what everybody says. It has all the advantages: a stronger economy, a younger population, cheaper energy and a central bank ready to print money as necessary.

Look for U.S. manufacturing to get a boost, especially in industries such as chemicals, from new energy discoveries. Households should benefit from lower energy prices too. And the dollar should go up as foreigners move their money to America in search of safety and higher returns.

This from markets blog Business Insider:

We are seeing calls that, thanks to shale drilling, the U.S. is poised to become the world leader in oil production, leading some to begin invoking "Saudi America."

Goldman Sachs analyst Kamakshya Trivedi, weighed in on the global macro implications of this phenomenon in a note titled: "The shale revolution is changing the global energy landscape."

The note actually goes further, talking about how the entire economic landscape could potentially change.

The main impact, they write, is that oil prices will no longer prove a brake on growth:

...shifts in production are gradually loosening the oil price constraint that has been a persistent feature of the global economy. If global demand growth can recover, the risks that it will be choked off by rising oil prices are receding.

This will produce a knock-on effect for household incomes in the West, while blindsiding petro-states:

The drag on household incomes in the developed world from this source should end.

Meanwhile, central banks will be able to shift their focus from containing headline inflation:

Rising energy prices have affected core inflation measures to a degree, influencing the inflation outlook even for central banks, like the Federal Reserve, that have focused more on underlying inflation measures. As a result, lower ongoing energy inflation means that monetary policy may be easier on average than it otherwise would have been.

They've got ZIRP and QE to infinity. They seem to be trying to cause inflation, not fight it. These guys aren't firefighters. They're pyromaniacs. As credit expert Tony Boechk, who writes The Boeckh Investment Letter, puts it:

The magnitude of reflation efforts is without precedent.

It's time to buy America.

America's military reach will be unrivalled for decades. It has a stable political system. The country's demographic profile is significantly better than that of any potential rivals. […] The US has huge advantage in technological prowess and intellectual resources.

How about that, dear reader? Is it time to buy America?

Maybe not. The real effect of cheaper energy in the U.S. will be to allow policymakers to make a bigger mess of things. They'll shift more of America's real wealth to the zombies. They'll go deeper into debt. They'll print more money.

The Worst Kind of Luck

America got lucky. Its energy entrepreneurs found ways to squeeze oil and gas out of stone. Neat trick. But sometimes good luck is the worst kind of luck.

Putting that aside, one thing we notice immediately: Mr. Stephens seems to have no idea how markets work. Reading his description of America's pluses, it looks like a time to sell the country, not buy it.

Stephens says the U.S. is leading in several important ways. But so what? What America is today must already be reflected in the prices of her stocks, bonds and real estate.

Future prices are tomorrow's business. If the U.S. could surprise on the upside, it might be a good time to buy. If the surprise is more likely to come on the downside, it is better to sell.

It is like betting at a racetrack. The previous winner may hold his head high and prance around. He may be the favorite to win again. He may be at the peak of his career. But that is not usually a good time to bet on him.

Investors tend to over-value the recent past and forget the distant past. They like betting on yesterday's winners. They run the odds up on the favorite until the payout for winning is small and the risk of loss is huge.

That is why the yield on the 10-year T-note is so low - less than 1.6% last week. And that is why U.S. stocks are so expensive - about 32% above their historic average on a Shiller P/E basis (which uses the average inflation-adjusted earnings for the previous 10 years). 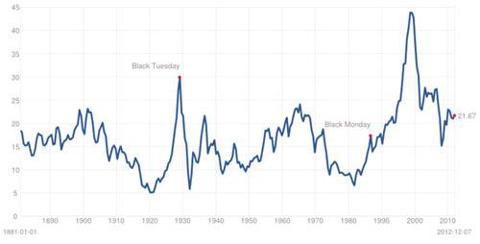 Stocks and bonds have been in bull markets for the last 30 years. A generation of investors has grown up with no experience of anything else. As far as they know, stocks only go up. And on the rare occasions when they go down, the feds come in to push them back up again.

As for bonds, they're a one-way bet too. Ben Bernanke has pledged to keep bond prices high for years into the future. If prices begin to fall (pushing up bond yields) he'll come into the market to shore them up.

Of course, it's been many years since we thought we could predict the future. A full head of hair and soothsaying both went away at about the same time.

What we try to do now is to wait for things to get so far out of whack that even a Fed governor has to work hard not to notice. Then we bet that they will get back into whack.

When? How? We don't know. But right now, we see U.S. debt at levels that look out of whack to us. The feds are running real, unfunded deficits equal to 21 times the rate of GDP growth.

Where this will lead? We don't know. But probably not to higher prices for America's stocks and bonds.

P.S. Move Your Money out of Stocks -- Right Now

A coordinated "economic suicide bomb" attack on the stock market could begin on Dec. 31, 2012, according to findings by the economic research team at the Insiders Strategy Group.

If you have money in the stock market, you must remove a large chunk -- if not all -- of it as soon as possible.

In this letter, I'll show you 27 alternative investments that are poised to profit -- even as the stock market collapses.

Article brought to you by Inside Investing Daily. Republish without charge. Required: Author attribution, links back to original content or www.insideinvestingdaily.com. Any investment contains risk. Please see our disclaimer.