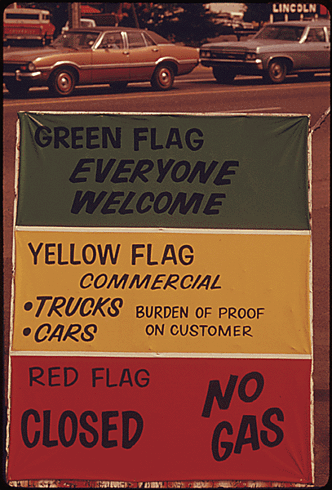 The deteriorating situation in Libya and lingering fears that the uprising will spread to other countries sent oil prices above $100 per barrel on Tuesday. As of March 2, it appeared that 1 million barrels per day (roughly 62 percent of capacity) of Libyan oil production was shut down.

The turmoil has led many to compare today’s events with those of the 1970s and 1980s when the price of oil quadrupled and American drivers waited in miles-long lines to receive their rationing of gasoline. In fact, we’ve already seen the media discuss the possibilities of $200 per barrel oil and $10 gasoline.

While these discussions grab attention, the likelihood of them coming to fruition is slim. This week’s chart from Deutcshe Bank shows the effect of these types of events has waned over the years because today’s global energy market is far different than it was in the past. Deutcshe Bank compared four oil price shocks relating to supply disruptions since the 1970s: The Yom Kippur War in 1973, the Iranian Revolution in 1979, the Iraqi invasion of Iran in 1980 and Iraqi invasion of Kuwait in 1990.

You can see from the chart that the Iraqi invasion of Kuwait in 1990 had roughly 40 percent less of an effect on oil prices than the Yom Kippur War did. Deutsche Bank says this is because the United States and other world powers have become more skilled and better prepared in response to these events.

For starters, the International Energy Agency (NASDAQ:IEA) was established in 1974 to “help countries coordinate a collective response to major disruptions in oil supply through the release of emergency oil stocks to the markets.”

In addition, Europe, the U.S., and recently China have built strategic petroleum reserves (SPRs) to insulate themselves from such shocks. The SPRs can be deployed in the event of a severe increase in oil prices which would likely cause a major adverse impact on the national economy.

Western Europe, a top destination for Libyan oil, is most vulnerable to a disruption in the North African oil market but the IEA says that European refiners have an ample amount of crude until the end of March and are currently making arrangements for April. In addition, the IEA says “crude oil markets in Europe are not perceived as constrained, with crude demand relatively low due to a period of large-scale maintenance of refineries.”

So far, U.S. consumers have remained resilient in the face of higher gasoline prices. Nationwide gasoline prices have risen 27.6 cents over the past month and are 20 percent higher than a year ago but data from MasterCard released this week shows gasoline demand is up 2.6 percent on a year-over-year basis for roughly the same time period.

Heading into the summer driving season, this resiliency will become even more important if the turmoil should continue.