Retired Engineer from the nuclear utility field that sees many new technologies developing with the mass production of economical Quantum Dots (QD). Displays, bio-med, anti-counterfeiting, security, LED's, solar. For one, Quantum Dots solar panels will have a significant negative impact on the utility industry in the future as more and more residential customers go "Off The Grid". Even though QD's have NOTHING to due with the nuclear field, they will be the death of the industry.

It's all about Quantum Materials Corp. (OTC:QTMM) a nanotechnology company that can make copious amounts of quantum dots that the average person doesn't understand, know if you can see them with the naked eye, how they are used or what they even are. Quantum dots are man made crystals smaller than human cells. Their special electrical conductivity properties have generated a new class of semiconductor. These unique nanocrystals, also known as nanoparticles, are creating quite a stir in several industries because the technology applications are across a broad spectrum and you may remember the growth of companies like Intel, Samsung and Texas Instruments that were making semiconductors. Quantum Materials Corp. makes Quantum Dots which are the next generation of semiconductors.

Why invest in quantum dots? Think of what has changed the shape of the future for the world in the past. The wheel, smelting, gunpowder, and computers may come to mind. Now add Quantum Dots! Why? Because quantum dots (QDs) have completed the transition from a once curious demonstration of quantum confinement in semiconductors to an exponential expansion of applications ranging from fluorophores providing unique insights in biological investigations to multi-exciton generation (MEG) in solar cells. 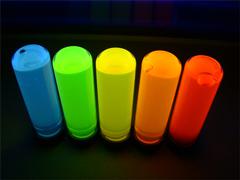 I first read in Motley Fool a statement and loved it because it is so true, So, I'll relay it again "the secret to making a fortune in the stock market is to identify a unique growth business poised to dominate a mass market." You'll want to remember that and invest for the future in nanotechnology. One company that meets the criteria as a growth business that will dominate a mass market is Quantum Materials Corp (OTC:QTMM) with their Tetrapod Quantum Dot's (TQD). They have multiple uses in a wide array of applications in many different sectors...not just solar, medical and visual displays. Those were the primary reasons that I invested in this stock in the 1st place and as more and more uses for quantum dots are discovered every day, it re-enforces that I made the right decision...."it's the same as having 'a diversified portfolio , all in one stock'."[1] 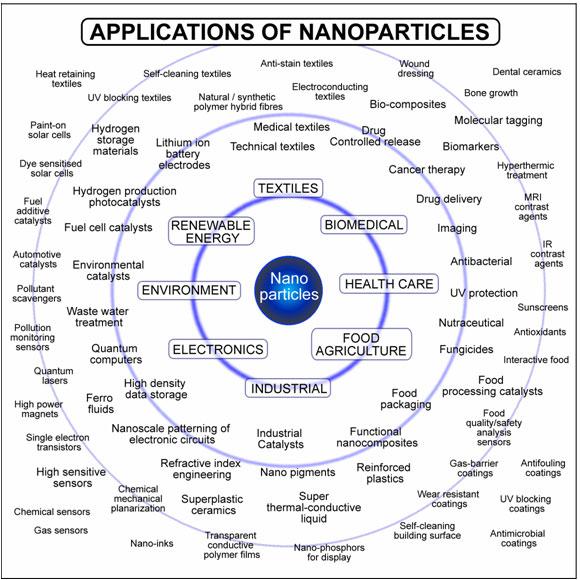 An investment in nanotechnology and in particular Quantum Materials Corp. is essential! This nanotechnology field that most people know nothing about is going to change how the world develops in ways completely unimaginative to most, as seen in the incomplete chart above, i.e. waste heat recovery and flexible solar cells not addressed.
Tissue welding with lasers during surgery, selective cell isolation to eradicate cancers, solar cells with up to 65% efficiency, displays that pop with vibrant colors, power consumption 50% less than existing means, 3D TV's that could go into the realm of holographic realism, clothing and paints that change color with the whim of your desires. Sounds far fetched?
So was Dick Tracy's 2 way wrist radio/TV watch in 1964, precursor to cell phones today. The Quantum Materials Corporation developed the method to mass produce a nanoparticle called a QUANTUM DOT that will follow the world-changing technologies like Plastics 1920's - 40's, Biotech 1940's - 60-s, Internet 1970's - 90's and now Nanotech 2010 - ?.
The beauty of this quantum dot is its ubiquitous use in so many life changing applications.
A previous press release with NanoAxis using Quantum Materials Corp TQD's in their Cancer, Diabetes, Alzheimer's and depression research was eye opening. http://www.prweb.com/releases/2011/9/prweb8794822.htm Multiple applications like that in one sector of one market give credence to the depth of this technology into the diverse commercial markets opening up. Optoelectronics and the display screens that save energy proposed for future QDLED iPhones [3&4] to the household light bulbs will all use Quantum Dots. Anything that has color associated with it is a candidate for QD use. How broad is that? And the amazing part of this is it goes both ways. Not only do quantum dots give off vibrant light in every visible color spectrum but they absorb light in every spectrum to generate electricity. Solar cells will power devices 24/7. This day and night production of electricity uses solar cells that generate power from the ultraviolet thru visible to the infrared lighting range to produce their power. To be more descriptive, sunlight at zenith (climax or high point) provides a radiance of just over 1 kilowatt per square meter at sea level. Of this energy 527 watts is infrared radiation, 445 watts is visible light, and 32 watts is ultraviolet radiation. The wafer type solar cells available today can only process visible light. That leaves out over half of the energy available from IR and the remainder in the UV. 56% of the available energy to be converted to electricity is LOST using today's solar cells. In the future using the Solterra Renewable Technology flexible solar cell you will be able to capture that lost energy in the IR and UV region. And what is really exciting about this new Nanotechnology with Tetrapod Quantum Dots is it's absorption capability 24 hours a day! Like enhanced night vision goggles the IR at night (although it would be a small amount) is enough to continue generation of power around the clock. Indoors (day and night) the lighting will be recycled to generate power with solar floors.

Is it going to happen tomorrow? NO! 'Quantum Dots (QD)' is the latest and the most advanced part of semiconductor nanoparticles, which, currently, are at the pre-commercialized stage.[5] All developing technologies of significance take around 20 years to come to fruition. QD technology and products are no different, hitting the 24 year mark this year. The quantum dot industry is going to go through a mega growth period and that is the problem currently facing the manufacturers. The mega market hasn't arrived and is another two to three years away, and that is a good thing because the current manufacturers like Nanoco and Nanosys couldn't support an explosive growth demand. They are struggling just to make their current quotas now. QMC on the other hand is posturing and aligning resources to be able to support the mega market growth when it arrives full force. QMC has patented a continuous manufacturing approach using a microfluidic-reactor. One small reactor can produce 100 kg of tetrapod QDs per day, or 30,000 kg per year. Colloidal batch synthesis methods to manufacture QD's in gram quantities will not support the commercial market needs for 100's of kilograms per day. The best Nanosys currently can do is a little more than 2000kg per year, less than 10 kilograms per day. Batch synthesis is too costly, time consuming and a large overhead is required. That will cut the field of approximately 22 players down significantly. For investors the field is even smaller, publically traded companies manufacturing QD's are very limited. Publically traded companies mass producing QD's to support commercialization of products brings us back to the quote above,"the secret to making a fortune in the stock market is to identify a unique growth business poised to dominate a mass market." Quantum Materials Corp. using microfluidic-reactors will easily be able to expand to support demand from the industries mega growth potential. The question is will the microfluidic-reactor manufacturer be able to provide the units needed for a mega growth demand, or will the company have to go to shift work around the clock, 7 days a week until additional units arrive? I think in a year microfluidic-reactor supply will not be an issue for Quantum Materials Corp. as they have been diligently working with the manufacturer to address mega growth demand.

You can't say now that you didn't have a chance to look into what could be the next Wall Street Wonder company with return potentials like Dell, Microsoft, Apple and Amazon. I suggest you investigate further Quantum Materials Corp - ticker QTMM and then if you decide not to invest at least follow the company developments. You can always change your mind later, just don't watch another life time opportunity pass you by. Life is too short waiting for the next one to come by. Remember by the time feature magazines and newspapers like Barron's, Forbes or The Wall Street Journal start covering breaking technology companies like Quantum Materials Corp. , the most potential for maximizing profit has already slipped past you and out your wallet!

Good luck, health and prosperity to you.

Latest video:
June 2013: Click HERE to view the CEO's look into the future

Disclosure: I am long QTMM.