Scott Wright is a long-time speculator with a lifelong passion for the financial markets. Mr. Wright performs research and analysis for Zeal's acclaimed newsletters (http://www.zealllc.com/intelligence.htm) and reports (http://www.zealllc.com/reports.htm). In these newsletters subscribers enjoy cutting-edge market analysis and high-potential trade recommendations.
Junior resource stocks are fickle little things. And most investors who dabble in this realm are fully aware of their capricious nature. One of the best ways to describe owning these stocks can be summed up by one of the most famous lines in literary history, “It was the best of times, it was the worst of times…”
Much like this opening line from Charles Dickens’ A Tale of Two Cities, junior resource stocks can offer the best of times and the worst of times. These super-volatile tiny-cap stocks can indeed provide investors with legendary gains in the best of times. If the general stock markets are rising, underlying commodities prices are rising, and/or a junior scores a big find, it’s not uncommon to see gains from the hundreds to thousands of percent in quick fashion.
But in the worst of times, junior investors can see their capital disappear in a flash. If the stock markets and commodities prices move against them, and/or they fail to deliver, these stocks can lose serious value in quick fashion. A fine example of the worst of times is what happened to junior resource stocks in 2008.
Any investor in the junior realm during 2008 felt some serious pain. Junior resource stocks had already been in decline since the second half of 2007, but 2008’s infamous stock panic brought about wailing and gnashing of teeth. In the second half of the year the stock markets, measured by the S&P 500 (SPX), were crushed, commodities prices plummeted, and sentiment was at despairing lows.
On the year the SPX had fallen a staggering 48% to its November low. But this was nothing compared to how the juniors fared, with the average junior resource stock losing three-quarters of its value over this same span!
This junior carnage is best measured by the fortunes of the S&P/TSX Venture Composite Index (symbol CDNX, based on the original Canadian Venture Exchange). The CDNX is comprised of nearly 500 of the biggest and best stocks in the TSX Venture Exchange (TSX-V), which is home to the largest contingent of the world’s junior resource stocks. Over 75% of the TSX-V’s listed companies are in the business of natural-resources exploration and development.
This worst-of-times scenario resulted in a 2008 peak-to-trough CDNX decline of a whopping 76%. Losses like this obviously have a devastating effect on one’s capital, and indeed the junior-stock sector forever lost a large contingent of investors as a result. But for the survivors and new investors onto the scene since, 2008’s sobering plunge has ushered in a new era of protectionism. How does one protect his junior capital from future selloffs?
Investors trading in the junior arena obviously have a greater penchant for risk than the average investor. They embrace the risk this sector presents itself with in anticipation of huge rewards. But even these gun-slinging traders submit to the core market quintessence of buying low and selling high. And you can bet that if there was a way of increasing the probabilities of capturing gains at highs and buying back in at lows, better timing exit and entry points, they would jump all over this knowledge.
Well for tells on the directionality of the greater junior resource-stock sector, you need look no farther than the fortunes of the SPX. At Zeal we’ve done extensive analysis on the SPX’s sphere of influence, and evidence continues to support this flagship index as the post-panic de-facto trailblazer of the global markets.
My business partner Adam Hamilton has written numerous essays over the past couple years highlighting this phenomenon. And in this work he clearly demonstrates how the post-panic SPX strongly colors the directionality of many other markets. It’s simply amazing to see how the SPX drives deliberate movements in commodities and commodities stocks! And as you can see in the chart below, the CDNX is no exception. 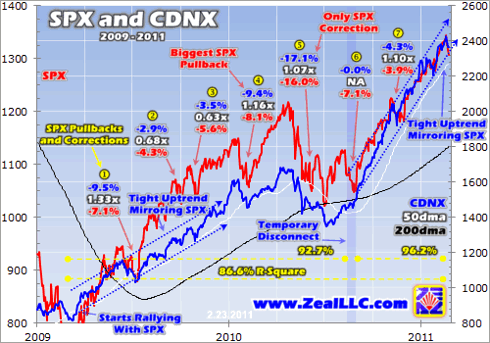