I am a recent graduate of Emory University's Goizueta Business School (BBA '20). I love learning and try to be smarter each day in every aspect of life!

We all know that it's no simple task to accurately predict a stock's future movement, but there are certain candlestick patterns that can augment a trader's outlook.

In a previous article I talked all about candlesticks and doji. The focus of this article is specifically bullish candlestick patterns. If you see these patterns occur on daily, weekly, or even monthly charts, you should begin to feel bullish about the underlying stock. So, without further ado, here they are:

Although an engulfing patterns can occur during an uptrend or downtrend, the pattern is more reliable during the latter. That is, during a downtrend the pattern signals that a reversal may be coming, and doesn't mean much in the context of an uptrend.

This candlestick pattern occurs when a small, filled candle is "engulfed" by a large, hallow candle. During the period of the first candle (one hour, one day, etc.) the stock closes below where it opens. In the next period, the stock opens below where it closes and rallies higher than the opening price of the previous candle. The idea is that the stock is poised for more upward momentum because the stock just experience a heavy bias to the buy side. 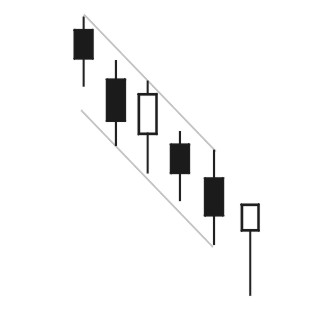 The hammer candle often signals the end of a downtrend. (If you see this candle during an uptrend, it's called a "hanging man" and is very bearish). This candle has a small, hallow real body and a shadow that is at least two times as long as the real body.

The hammer candle signals the end of a downtrend because it represents climax selling. Bears try to drive the price down but can't maintain control by the end of the period (hence the long shadow). If this candle were to occur on a daily chart, it would mean that the stock put in a new low, but then reversed to close at or near the high of the day. Like a bullish engulfing candlestick pattern, the hammer candle shows that there is a heavy bias to the buy side that should continue.

Below is a weekly chart of Twitter (TWTR) that shows a hammer candle in action. You can see that (1) the candle formed at the end of a downtrend, (2) its shadow is more than two times the size of the real body, and (3) the stock closed at the high of the week. It also helps that volume was higher than in previous weeks because this is indicative of capitulation from the bears. Volume is very important in all technical analysis and should never be ignored.

On February 15, I authored an in-depth technical analysis of Twitter's stock and pointed out the above features. Since that article was published, TWTR has gained 13% (and I still believe that the stock will go higher). Personally, the hammer is my favorite bullish reversal candlestick pattern, which is why I like to write about them when I see them. 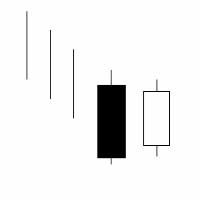 This candlestick pattern consists of a large red candle (meaning the stock closed lower than it opened and lost value) followed by a smaller candlestick whose height is contained within the vertical range of the red candle's real body. This pattern must occur in the midst of a downtrend, but signals that the trend may be reversing. Although a bearish version of the harami pattern also exists, the bullish pattern is much more reliable.

Below is an example of the harami candlestick appearing on the daily chart of Campbell Soup (CPB). Although the downtrend was brief, the harami pattern still give you the heads up that it may be coming to an end. And it certainly did; CPB has advanced more than 10% since the formation of the harami pattern. 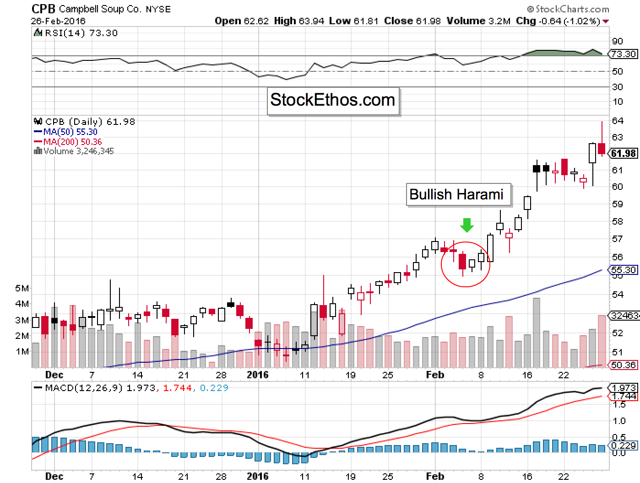 A piercing pattern requires two candlesticks and forms when the second candle closes above the middle of the first candle. The second candle must open below the first, creating a gap down. This pattern is viewed as bullish because it means that bulls were able to fill the gap and press further into the losses of the previous session. In the second session bulls are successful in holding prices higher by absorbing the excess supply. You can see an example of this pattern on the daily chart of Apple (AAPL) shown below.

What Else To Look For

Look for reversal patterns at points of support to increase their robustness. The areas of support can come from moving averages, Fibonacci retracements, psychological levels (round numbers like $50 or $100), and previous reaction lows.

It's also advantageous to check some momentum indicators when searching for bullish reversals. In my article about TWTR I analyzed the stochastics and RSI to determine that a trend reversal was imminent. You either want to see that the stock is very oversold or that these indicators have been making higher highs and higher lows while the stock is trading sideways.

The latter is what I used to predict that Shake Shack (SHAK) was ready to breakout to the upside. You can see this exemplified on the chart of Shake Shack below and should read my article, "Go Ahead And Nibble At Shake Shack," for a full analysis of the stock. 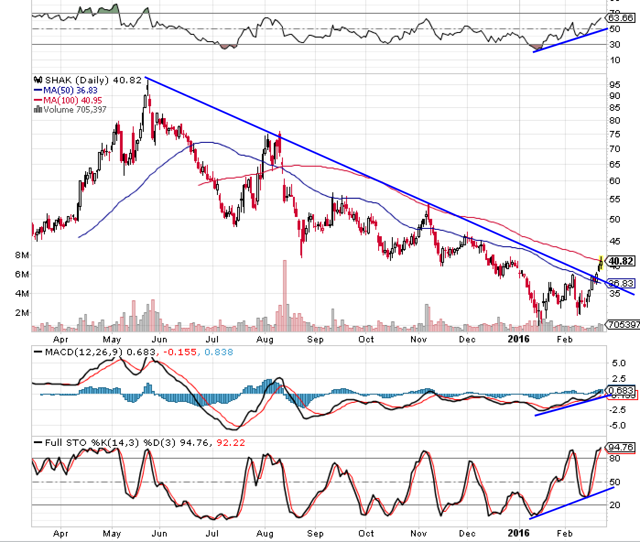