An accomplished analyst, author, and speaker, Jeff Clark is a globally recognized authority on precious metals. The son of an award-winning gold panner, with family-owned mining claims in California, Arizona, and Nevada, Jeff has deep roots in the industry. An active investor, with a love of writing, Jeff eventually became a mining industry analyst, including 10 years as senior editor for the world-renowned publication BIG GOLD. Jeff has been a regular conference speaker, including at Cambridge House and Sprott Resources events, the Silver Summit, and many others. He currently serves on the board at Strategic Wealth Preservation, a bullion storage facility in Grand Cayman, and provides analysis and market commentary for GoldSilver.com.

After a 12-year run, it looks like gold's wave has truly crested, and many bears are arguing that it's all downhill from here. A quick glance at a long-term gold price chart can certainly seem to confirm this impression. 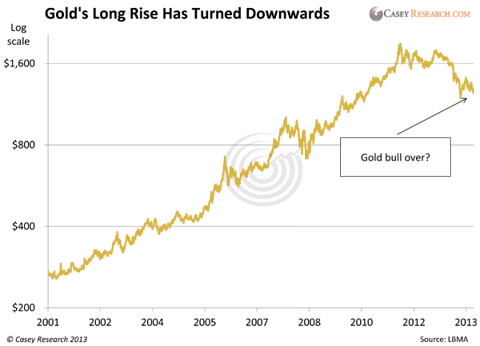 Gold's price has fallen by more than a third since its 2011 high. The downturn exceeds the 2008 waterfall selloff. Many technical analysts are saying that the "damage" on the charts is too great for gold to recover. The rout is so bad, even hardened goldbugs have grown quiet lately.

Is it time for gold investors to admit defeat?

Well, if it were true that "damage" on a chart such as we've seen signals the end of a bull market, perhaps it might be. But is it so? Or is this just a correction?

One of the greatest bull markets in modern times was the Nasdaq in the 1990s. The Nasdaq composite rose a whopping 1,150% over the span of a decade. But did you know it had a major correction in the middle of that run? The same is true of oil's big surge in the mid-2000s. Consider this chart of the big corrections oil and the Nasdaq experienced: 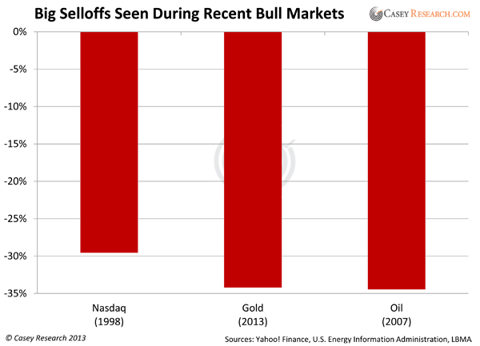 After seeing prices crash in both the Nasdaq and oil, most investors assumed those bull markets were over-but they weren't. Here's the subsequent rise in each after prices bottomed: 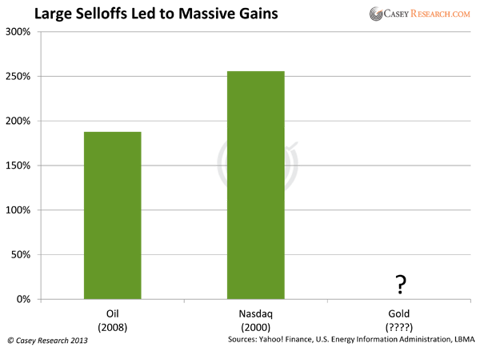 The Nasdaq and oil did recover from their large corrections-despite all the technical "damage" many pointed to as proof that those bull markets were over. Investors who sold their positions during the downdrafts missed out on some fantastic profits.

Given that all the reasons gold rose from 2001 to 2011 are still in force, I am convinced gold's current correction is the setup for a second big surge-and, ultimately, a true gold mania of historic proportions.

Just because gold doesn't seem to be reacting to Fed money-printing at the moment doesn't mean it won't. Sooner or later, reality trumps fantasy. Reason says that you can't quintuple your balance sheet in five years and expect no repercussions. The Fed keeps hinting it will taper its money printing, but it still has not. We've had QE1, QE2, Operation Twist, and now QE3… none of them has worked, and the new Fed chair wants to print even more money.

It's pure fantasy to believe there will be no consequences to these actions-and the reality is that whatever else happens, gold will react positively.

Should gold investors admit defeat? I say it's reckless central bankers who should declare defeat.

A gold recovery is inevitable. Prepare accordingly. Try BIG GOLD risk-free for 3 months to access our GLD put strategy, frequent bullion discounts, and the producers that will respond the strongest once the recovery takes hold. 100% satisfaction, or your money back-click here to get started.