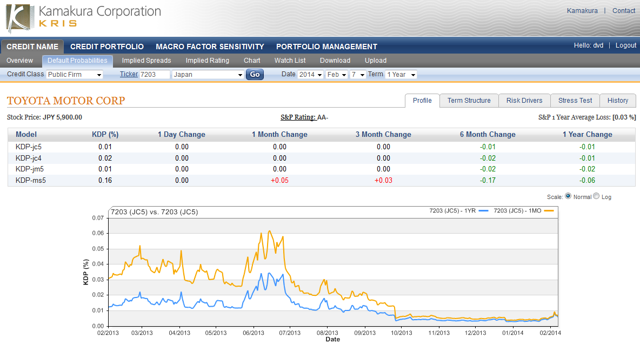 The Kamakura Risk Information Services version 5.0 Jarrow-Chava reduced form default probability model ( abbreviated KDP-jc5) makes default predictions using a sophisticated combination of financial ratios, stock price history, and macro-economic factors. The version 5.0 model was estimated over the period from 1990 to 2008, and includes the insights of the worst part of the recent credit crisis. Kamakura default probabilities are based on 1.76 million observations and more than 2000 defaults. The term structure of default is constructed by using a related series of econometric relationships estimated on this data base. KRIS covers 35,000 firms in 56 countries, updated daily. Free trials are available at Info@Kamakuraco.com. An overview of the full suite of Kamakura default probability models is available here.