The Federal Reserve's 2015 Comprehensive Capital Analysis and Review stress testing exercise is moving toward its conclusion, but the biggest banks in the United States live in fear of delivering a "wrong answer" to the Federal Reserve. None of the big banks is immune from this fear, including the big four Bank of America (BAC), Citigroup (C), JPMorgan Chase (JPM), and Wells Fargo (WFC). In this note, we explain this fear and present a worked example of the right answer, a stress test using the Federal Reserve's CCAR 2015 scenarios for an equal-weighted portfolio of loans to all public firms in North America. Along the way, we make suggestions about how to improve the CCAR stress testing process from the point of view of both the Federal Reserve and the banks that it regulates.

One of the fears bankers have is presenting stress test results to the Federal Reserve that contain mistakes, leading the Federal Reserve to reject the results. In recent notes, we have outlined a number of common errors that rightfully should lead to the conclusion that the bank's stress test relied upon invalid models. We list a few common errors here:

An Aversion to Using Models that are "Too Good"

Another fear that some bankers have is that superbly calculated stress test results backed by best practice econometrics and documentation will be incorrectly rejected by the Fed. This can happen for two reasons. The first is a lack of understanding by the front line regulatory examiners of those calculations. The second is the tyranny of the "severely adverse scenario" in the CCAR process. We discuss that in the next section.

Returning to the first point, there is anecdotal evidence that some of the biggest and most sophisticated banks in the United States are pulling their punches, so to speak, from an analytical point of view. Instead of using their most sophisticated staff members and best credit models, there is anecdotal evidence that they have instead intentionally employed inferior models because they believe these inferior models are more likely to gain approval. How do they know which inferior models to use, given that their own history with the CCAR process is so short? They engage the usual set of consulting firms, expert in transporting the lowest common denominator analytics across the financial services industry, and use nothing more sophisticated than these lower common denominator models. This is surely not what the Federal Reserve and the U.S. Congress intended to happen.

An Aversion to Producing Results That are not "Severely Adverse"

Many bankers tell me that their stress test scenarios must meet a very important political constraint. The "adverse" scenario must show losses that are greater than in the "base line" scenario, and the "severely adverse" scenario must produce losses that are greater than the "adverse" scenario. These bankers, most of whom have many decades of risk management and bank political experience, are convinced that there is no chance of stress test approval, no matter how well documented and presented, for a calculation that does not meet these constraints. If this fear is justified, it is an embarrassment to U.S. bank regulators and to the U.S. Congress that has given them their mandate. We explain why with a few examples.

Let's assume that a bank subject to CCAR has successfully hedged or securitized all of its credit risk, so interest rate risk is its only concern. Let's look at the base line, adverse, and severely adverse scenarios for the 3 month U.S. Treasury bill rate, one of the Fed's most important CCAR macro factors. We show historical movements and the scenario forecasts in this graph: 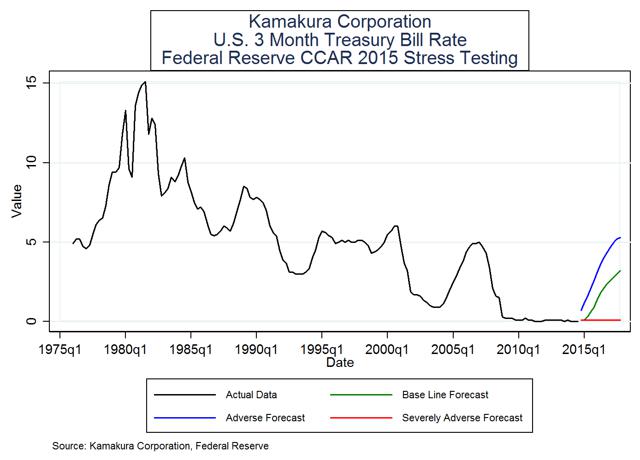 The same relative movements, compared to the base line scenario, can be seen for the 5 year U.S. Treasury yield in this graph: 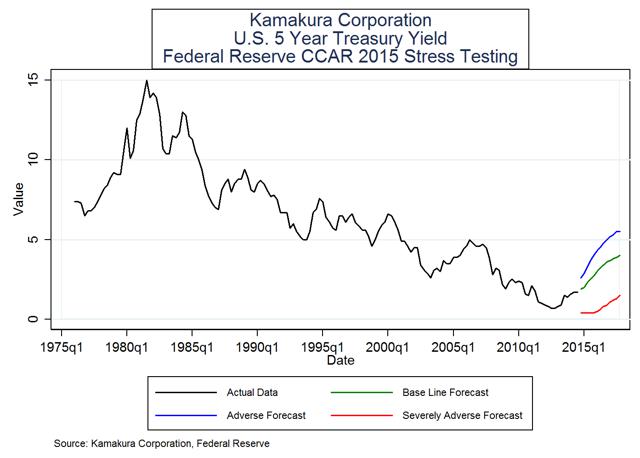 What if the bank has swapped all of its basis risk related to the prime rate so that the bank earns a fixed rate on the swap and pays the prime rate, a plausible transaction in a "reach for yield" environment. The graph below shows the Fed's scenarios for the prime rate. 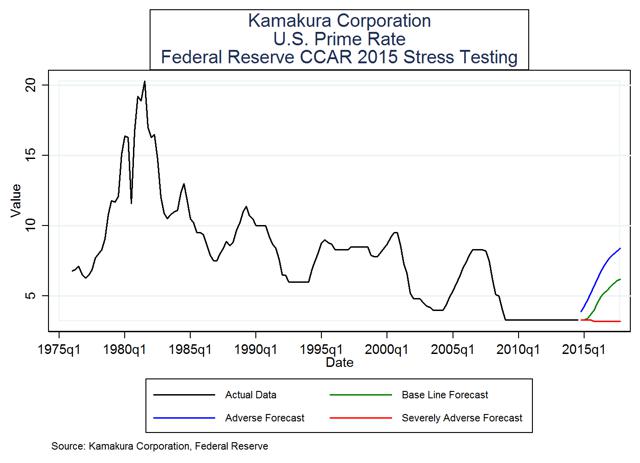 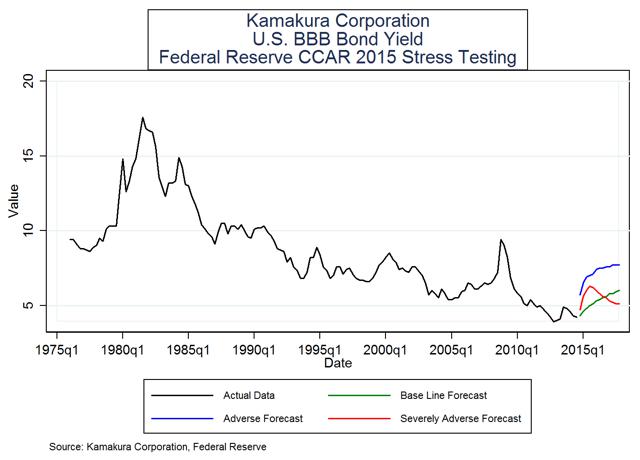 We now put aside this political dilemma and concentrate on a worked example, stress testing losses on a portfolio of exposures to one asset class. Because, by definition, the information on public firms is public, we use that asset class to measure the relative impact of the base line, adverse, and severely adverse scenarios.

The results will vary by the identities of the firms in the portfolio and the amount and nature of the credit exposure. In order to quickly evaluate the relative severity of losses under the base line, adverse, and severely adverse scenarios, we use "common practice," not "best practice," in fitting the relationships in step 3. We fit macro factors to portfolio losses to a "historical loan portfolio," something many banks in the CCAR process have been forced to do when their own data archives do not allow name-specific and transaction specific analysis over a long period of time. Fitting macro factors to portfolio losses is common practice, not best practice, for these reasons:

Our hypothetical portfolio at March 31, 2014 is assumed to have these characteristics:

We fit historical loss rates on this pool of all public firms in North America back to 1990. Using all of the Fed's domestic CCAR macro factors and transformations of them, we fit a relationship to the loss rate on this pool over 96 quarters. Fifteen explanatory variables were statistically significant. Using a transformation of the default rate on the pool that ensures a projected default probability in the range from 0% to 100%, we found an adjusted r-squared of 85.04%. The stress test results are shown below. 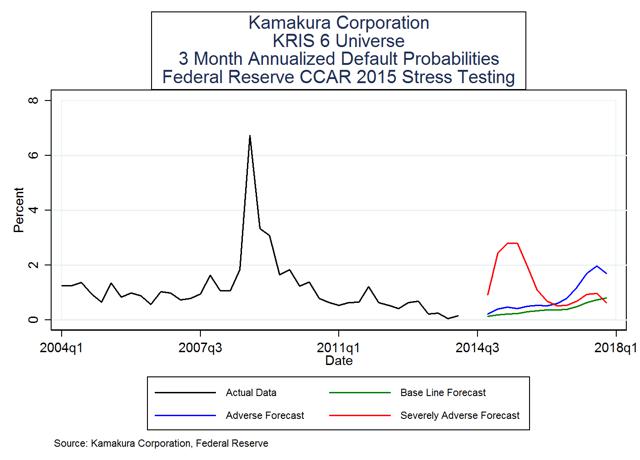 We have demonstrated that a best practice linkage between public firm default probabilities and the Fed's CCAR macro factors produces results that are both highly plausible and consistent with best practice econometrics. Consistent with the oft-stated bankers' political objectives, the projected losses are worst in the severely adverse scenario and best in the base line scenario. The procedures used avoid the errors we often see in lowest common denominator credit modeling efforts. There is no need to pull any analytical punches in the CCAR process. Indeed, if ever there were a time when best practice is called for, risk assessment at the peak of the credit cycle is the best possible time to use best practice.