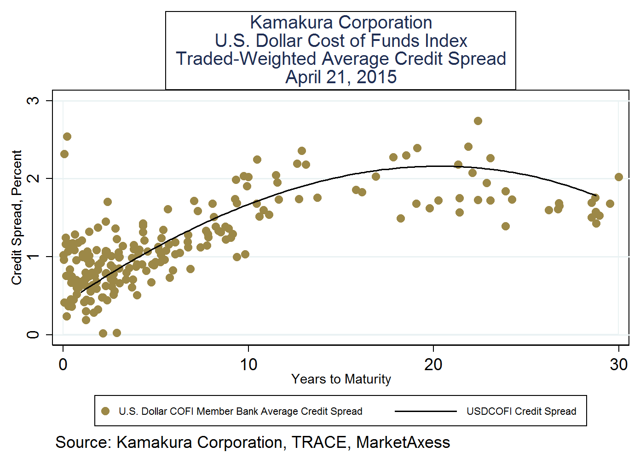 The U.S. Dollar Cost of Funds IndexTM measures the trade-weighted cost of funds for the largest deposit-taking U.S. bank holding companies. The index is a credit spread, measured in percent and updated daily, over the matched maturity U.S. Treasury yield on the same day. The current bank holding companies used in determining the index are Bank of America Corporation (BAC), Citigroup Inc. (C), JPMorgan Chase & Co. (JPM), and Wells Fargo & Company (WFC). The index is an independent market-based alternative to the Libor-swap curve that has traditionally been used by many banks as an estimate of their marginal cost of funds. Kamakura Corporation is the calculation agent, and the underlying bond price data is provided by TRACE and the U.S. Department of the Treasury.

Today's on the run values for the U.S. Dollar Cost of Funds Index are shown below.