Does the Lack of Gold's Reaction to Weak Dollar Invalidate Its Bullish Outlook?

Based on the December 7th, 2012 Premium Update. Visit our archives for more gold & silver analysis.

Gold fell more than 1 percent on Tuesday hitting its lowest price in nearly a month. The most concerning part about this decline is that it took place with dollar's simultaneous plunge. We have already touched upon the usual negative correlation between gold and U.S. dollar in the past, and while it is certainly true most of the time, there are periods where precious metals fail to react to dollar's weakness. There are various hypotheses why this is so this time and one of them is the "fiscal cliff" issue.

Buyers are supposedly waiting on the sidelines because of uncertainty over the "fiscal cliff" - $600 billion in tax hikes and spending cuts that are due to kick in the New Year. Republicans and Democrats dug in on talks Wednesday, with both sides urging quick action but offering no compromises. They seem to be playing "chicken" in a political stare-down that shows no signs of breaking. On Wednesday, President Barack Obama rejected a nascent Republican plan that would have extended the bitter fight over the fiscal cliff into next year.

Some pundits say the fiscal cliff problem will cause the price of gold to soar and there are those who claim the opposite. The arguments go like this. Going over the fiscal cliff will probably send an earthquake through the markets causing fear which could drive investors into gold as a safe haven. In addition, it will weaken the U.S. dollar which is likely to strengthen gold. If politicians are able to avert going over the cliff, markets will continue to focus on the QE Ponzi scheme, the debasement of the dollar and the inevitable inflation, all bullish for gold.

On the other side of the fence are those who say that going over the fiscal cliff will be bad for gold. The U.S. will go into a recession and gold will stumble along with everything else. Not going over the cliff could renew bullish sentiment for equities and decrease the appetite for gold.

We personally believe that the outlook for gold in the medium and long run is bullish and the "fiscal cliff" can do more good than harm to the yellow and other precious metals. We continue to expect the situation to be resolved by printing more money. No politician wants to be blamed for stocks' and economy's collapse (even a necessary one). Our best bet is that gold will rally strongly in 2013, perhaps topping close to the $2,500 level. To see what our rationale is, let us move on to today's technical part with the analysis of the USD Index. We'll start with the medium-term chart (charts courtesy by stockcharts.com.) 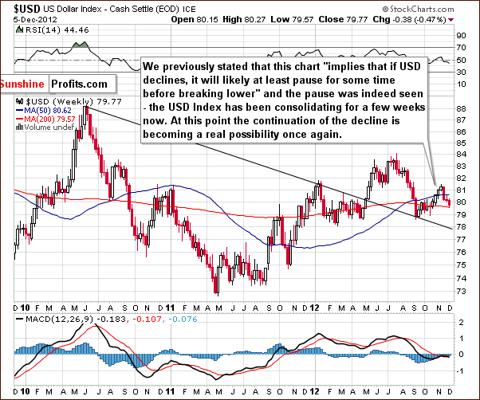 In the chart, virtually nothing has changed this week. Again, what was stated in last week s article is still up-to-date:

Let us now have a look at the U.S. currency from a short-term perspective. 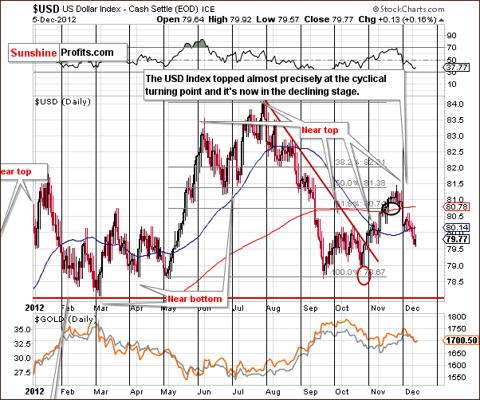 In the chart, we see that a top formed almost right at the cyclical turning point. With about one half of the previous decline corrected, it appears that a period of decline is once again in place here.

One concerning factor is that gold and silver moved lower along with the declines in this index. This is not a sign of strength for the precious metals. It means that the metals declined in terms of other currencies, mainly the euro. Let's take a closer look at the gold-euro relationship. 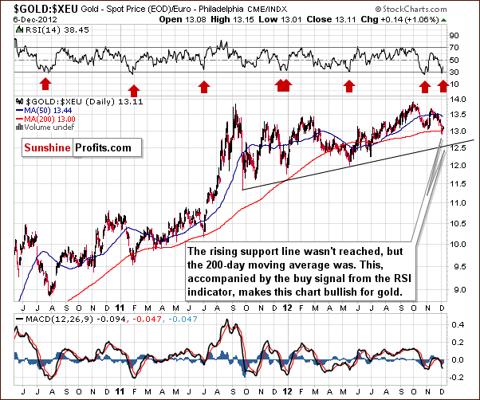 On the above chart we see that the 200-day moving average support line has been reached. This level has been above local bottoms many times in the past. More importantly, the RSI has touched 30 and this has usually been quickly followed by rallies (note red arrows in the upper part of the above chart) in the past so the local bottom may already be in here.

The above chart is important not only because of the signals that we can directly see and that we described in the above paragraph. It's important also because the decline that you can see in the last few weeks is directly linked to the simultaneous decline in the USD Index and the price of gold. Since the decline is likely over (support level being reached, buy signal from the RSI indicator), the same should be the case with the lack of positive reaction in gold to dollar's weakness. The USD Index declines could now begin to impact gold prices, and they could start to move higher any time now.

The limitation of the above analysis is that it doesn't have to be precise on a very short-term basis. In fact, it's based on medium-term price moves. We could see another small move lower that would take the RSI indicator slightly below the 30 level and the above picture would not be invalidated at all - it would become even more bullish based on this factor alone. This was the case in January and December 2011.

Summing up, the situation for the USD Index looks bearish, and this has bullish implications for the precious metals. Since no response was seen this week in gold and silver prices, however, an immediate rally may not be seen based on the above charts. The medium-term picture for gold appears very favorable.

Sunshine Profits enables anyone to forecast market changes with a level of accuracy that was once only available to closed-door institutions. It provides free trial access to its best investment tools (including lists of best gold stocks and best silver stocks), proprietary gold & silver indicators, buy & sell signals, weekly newsletter, and more. Seeing is believing.

All essays, research and information found above represent analyses and opinions of Przemyslaw Radomski, CFA and Sunshine Profits' associates only. As such, it may prove wrong and be a subject to change without notice. Opinions and analyses were based on data available to authors of respective essays at the time of writing. Although the information provided above is based on careful research and sources that are believed to be accurate, Przemyslaw Radomski, CFA and his associates do not guarantee the accuracy or thoroughness of the data or information reported. The opinions published above are neither an offer nor a recommendation to purchase or sell any securities. Mr. Radomski is not a Registered Securities Advisor. By reading Przemyslaw Radomski's, CFA reports you fully agree that he will not be held responsible or liable for any decisions you make regarding any information provided in these reports. Investing, trading and speculation in any financial markets may involve high risk of loss. Przemyslaw Radomski, CFA, Sunshine Profits' employees and affiliates as well as members of their families may have a short or long position in any securities, including those mentioned in any of the reports or essays, and may make additional purchases and/or sales of those securities without notice.