Based on the July 1st, 2011 Premium Update. Visit our archives for more gold & silver analysis.

The first half of 2011 is over. With the summer solstice just behind us we would like to review the first half of 2011 and look at what is ahead. Last year gold gained 26%, its third double-digit gain of the last four years. So far this year has been choppy. The yellow metal has risen 19.5 per cent this year to trade at about $1,500 a troy ounce buoyed by the emergence of sovereign debt concerns in the US as well as Eurozone debt woes. Since 2011 has begun, gold prices got hit with double-digit selloffs and rallies. The common culprit is the so-called “rebalancing", which is when traders who bought gold at the end of the year to show they owned it, dumped it in 2011 to take a profit. The same traders jumped back into the gold trade in February and March as violence exploded throughout the Middle East and North Africa region and Japan contended with its worst disaster since World War II.

Last year Eurozone concerns dominated the gold trade in the first half of the year. All the factors that drove gold higher last year – fear, uncertainties, lack of confidence in the dollar, gold as the ultimate currency, buying by newly wealthy Chinese families, sovereign troubles in the euro zone, central bank purchases, high unemployment in the U.S. – are still in place. Has anything really changed?

The US dollar has slid 5 per cent so far this year and is trading close to its lowest ever level against a basket of the world’s major currencies. This is biting into its status as the global reserve currency. Holders of large dollar reserves, notably China, have been diversifying away from the dollar. In the first four months of this year, three quarters of the $200 billion expansion in China’s foreign exchange reserves was invested in non-US dollar assets.

We once wrote that if we got an ounce of gold for every time we wrote the word “Greece” we would have a nice pile by now and would seriously consider retiring (just kidding, we like what we do too much). Greece dominated the financial news space these days as it pulled back from the brink of default and averted a larger Eurozone crisis after passing sweeping austerity measures. However, the possibility of a default remains a fear that troubles the sleep of many investors (for sure, those who don’t own gold.) Europe’s debt crisis, along with fear of natural disasters and political uprisings and upheavals, are prompting investors to seek out investments that promise to protect their portfolios in the event of economic meltdown.

The one thing we can safely predict is that the rest of 2011 will be as unpredictable as the first half. We will hope for the best and at the same time be prepared for the worst by tracking the price of gold and silver and making detailed analysis. So, let’s begin this week's technical part with the analysis of the Euro Index. We will start with the long-term chart (charts courtesy by http://stockcharts.com.) 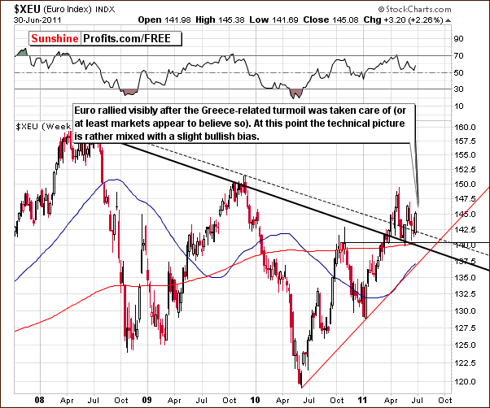 Look at the chart; the euro has rallied and this can most likely be attributed to the situation in Greece. The Greek Parliament agreed to cut spending and take a measured approach towards the economy. Investors cheered this news and appear to have bought euros which they had previously sold during a time of uncertainty. Optimism has now increased significantly and the result can be seen with the Euro Index recording more than a 2% gain during last week of June. When the Greek Parliament accepted the savings plan, the appetite for the euro and for stocks increased; however, gold reacted mildly to the news. The medium-term picture for euro is now slightly bullish.

What about the Dollar Index? 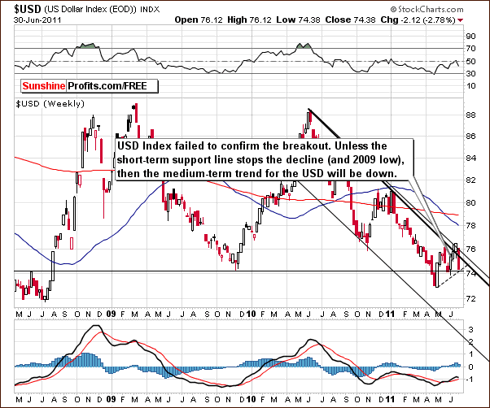 In the long-term USD Index chart, we see that there was no breakout above the declining medium-term trading channel. Instead, we have seen a move lower after the index touched the upper border, but this decline was stopped by the short-term rising support line and the 2009 lows.

The situation here is mixed, and whichever way the USD Index breaks is likely to determine the next big move for the dollar. The implications for gold are not obvious at this time. The situation for gold, however, is clearer than it is for the currencies at this time.

Overall, the situation for the Euro Index is more bullish than it has been in recent past. The opposite is true for the USD Index. There is little bullish news at this time for gold which simply is not reacting to the euro strength.

Keeping the uncertainty associated with the short-term moves in precious metals, let’s see what does Sunshine Profits Gold Bottom Indicator suggest at this time? 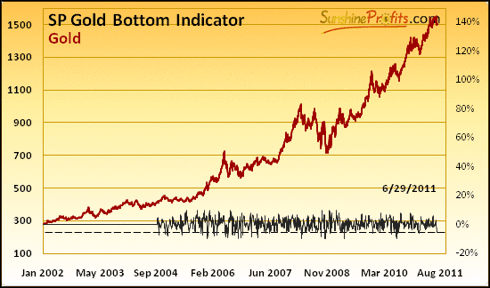 The SP Gold Bottom Indicator has just flashed a long-term buy signal. This indicates that gold is not at an exact top and that being completely out of the precious metals market is not the best idea. However, we don’t view this as invalidation of points made in our previous gold-related essays and we don’t think it makes the temporary decline in gold less probable. We’re neither at the top, nor at the final bottom.

The reason for the above skepticism is the fact that this indicator has been particularly reliable in situations that are not similar to the one we have today. In case of the similar situations, signals were quite imprecise. Here’s when we’ve seen previous long-term buy signals from the above indicator:

Overall, the situation is still quite bearish and taking the above indicator into account does not contradict the outlook for lower gold prices.

Summing up, recent events in the capital markets appear to have been greatly influenced by the developments in Greece. Considering both the currency indices and the SP Gold Bottom Indicator, long-term trend appears positive at this juncture, but a medium-term correction is still not over. Please be particularly careful if you plan to add to your positions right now, as it seems that waiting for lower prices is a good idea right now.

To make sure that you are notified once the new features are implemented, and get immediate access to my free thoughts on the market, including information not available publicly, we urge you to sign up for our free e-mail list. Gold & Silver Investors should definitely join us today and additionally get free, 7-day access to the Premium Sections on our website, including valuable tools and unique charts. It's free and you may unsubscribe at any time.

Interested in increasing your profits in the PM sector? Want to know which stocks to buy? Would you like to improve your risk/reward ratio?

Apart from weekly Premium Updates and quick Market Alerts, members of the Sunshine Profits’ Premium Service gain access to Gold Charts, Gold Investment Tools and Analysis of Gold & Silver Prices Naturally, you may browse the sample version and easily sign-up for a free weekly trial to see if the Premium Service meets your expectations.

All essays, research and information found above represent analyses and opinions of Mr. Radomski and Sunshine Profits' associates only. As such, it may prove wrong and be a subject to change without notice. Opinions and analyses were based on data available to authors of respective essays at the time of writing. Although the information provided above is based on careful research and sources that are believed to be accurate, Mr. Radomski and his associates do not guarantee the accuracy or thoroughness of the data or information reported. The opinions published above belong to Mr. Radomski or respective associates and are neither an offer nor a recommendation to purchase or sell securities. Mr. Radomski is not a Registered Securities Advisor. Mr. Radomski does not recommend services, products, business or investment in any company mentioned in any of his essays or reports. Materials published above have been prepared for your private use and their sole purpose is to educate readers about various investments.

By reading Mr. Radomski's essays or reports you fully agree that he will not be held responsible or liable for any decisions you make regarding any information provided in these essays or reports. Investing, trading and speculation in any financial markets may involve high risk of loss. We strongly advise that you consult a certified investment advisor and we encourage you to do your own research before making any investment decision. Mr. Radomski, Sunshine Profits' employees and affiliates as well as members of their families may have a short or long position in any securities, including those mentioned in any of the reports or essays, and may make additional purchases and/or sales of those securities without notice.