Is The Euro and The Rally In Gold Over?

This essay is based on the Premium Update posted on May 21st, 2010

Countries bailed out the banks. Now who is left to bail out the countries? While the decline in the euro appears to be very close to being over (as explained in the following part of the update), the fundamental situation of the Eurozone still appears to be one of the most popular topics these days, so the first part of this week's update will be dedicated to this particular part of the world.

All that the European Union’s unprecedented package of almost $1 trillion did is buy Europe time. The underlying problem still exists.

David Marsh, author of “The Euro: The Politics of the New Global Currency,” put it best. He wrote in a New York Times column:

“The dream of monetary union across Europe has turned into a nightmare. Led by France and Germany, European countries have decided to spend colossal sums of taxpayers’ money they cannot afford to heal mounting internal disparities they cannot conceal to shore up an edifice many believe cannot stand.”

The mountain of debt that shook the foundations of some of the world's biggest banks and drove the international financial system to the brink of disaster has shifted. Now that some sovereign countries are threatened by insolvency it is more expensive to buy insurance against national default than it is to insure against corporate failure.

Deficit spending, rapid money supply growth and negative real interest rates (inflation rate higher than nominal interest rate) are a good recipe for higher gold prices.  Right now we have all three ingredients, plus political risk, in what has become the “new normal.”

Ten years ago $1,000 bought nearly four ounces of gold. Today $1,000 won’t even get you a single ounce. That works out of a 78 percent fall in the value of the dollar in the past decade. In Abu Dhabi they have taken this to heart and the United Arab Emirates press reported this week that a gold bar vending machine, called the "Gold To Go", has been installed in the Emirates Palace Hotel. It dispenses bars in denominations of one, five and ten grams and one-ounce, along with different gold coin ranges including the Canadian Maple Leaf and the South African Krugerrand. In case you were wondering, it is "self-guarding" and shuts down if anything appears to be untoward.

To see if it’s worth our while to make our way to the “Gold to Go” vending machine, let's begin this week's technical part with the analysis of the Euro Index (charts courtesy by http://stockcharts.com.) 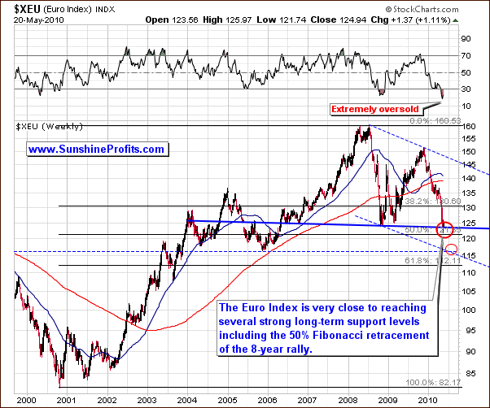 Although at first glance, the chart may be unclear, let us emphasize that the solid lines are most important, sending clearer signals as compared to the dashed lines, which are less likely to be valid. Today we see the euro at a very strong support level. The decline recently has been very sharp and indications are today that it is extremely oversold. What this means to the USD is that the rally we have seen of late may be ending and a decline in the USD likely.

The RSI on the above euro chart has been extremely low, which is a contrarian bullish signal. The RSI is at a level lower than it has been in 10 years. It is lower than the’00 bottom, the ’05 low following a sharp decline and also lower than what we saw in ’08 after a similar sharp decline.

What this suggests for the euro is that lower prices are unlikely in the near-term. The euro is also at a very strong support level created by a long-term support line, which also used to prove as a resistance in the past. This is one of the points that leads us to believe that the euro is not likely to decline further. It is also close to a previous bottom and close to the 50% retracement level of the full ’00-‘08 rally. Prices often decline 38.2%, 50% or 61.8%. We have now seen the euro move to one of these levels, actually slightly above it, and it’s likely to hold the current decline for at least a while. However, if we do move lower, it’s still likely that we won't go much lower, not below the area marked on the chart with the lower red ellipse (1.16 for the EUR/USD exchange rate).  However, it seems that the current support level is likely to hold. The question is if the following upswing would be caused by the increased trust in the euro (gold could decline), or the distrust in the dollar (gold would likely rally).

Again, this is one of the questions that is yet to be answered by the market itself in the following days, and that's why - as mentioned earlier - it will be crucial to monitor the way in which PMs and PM stocks react to the next move in USD and EUR. As always, we will issue a Market Alert to our Subscribers should any major change develop.

Therefore, the signals coming from the euro at this time point to its price level being close to a bottom right now. Support levels appear to be strong, and it’s very unlikely that we will see further declines.

Moving on to the gold priced in currencies other than the U.S. Dollar (very close to the gold in euro chart), let's take a look at the following picture. 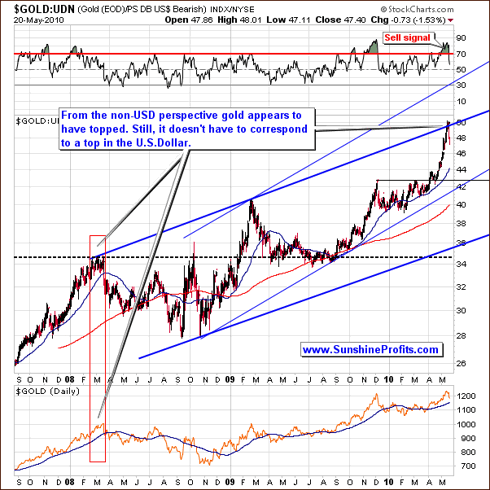 From the non-USD perspective recall last week we suggested selling gold to Subscribers, who trade gold for currencies other than the U.S. Dollar. Those who did should be please with this action as gold from a non-USD perspective declined. In fact we just got a confirmation from the RSI indicator.

What is important here for the U.S. Investors is that this top does not have to coincide with a top in gold from the USD perspective.

In the previous Premium Update, we wrote the following:

Please take a look at the red rectangle on the above chart, as we may see similar performance in the following days. A decline in the USD could easily cause the price of gold to increase (in USD terms) but at the same time it could have no effect on the price of gold in other currencies, for instance in euro.

The above paragraph is up-to-date also today.

We don’t want to make an impression that we are gold perma-bulls and we never suggest getting out of one's positions. To the contrary - we have successfully done so numerous times in the past, but the key point is always making sure that the rules, on which particular suggestions are based, are sound. By using this approach one will still not be able to be correct each and every time (simply because it's impossible, and that's why we have always suggested diversification of strategies), but it will ensure that huge profits are to be made over time.

It’s important to look at that way, in which PMs respond to the USD and general stock market. Trending upwards with high volume is a sure sign of strength.

Summing up, the indications are that the gold rally may continue on for a bit longer, but not necessarily from the non-USD perspective.

To make sure that you are notified once the new features are implemented, and get immediate access to my free thoughts on the market, including information not available publicly, I urge you to sign up for my free e-mail list. Sign up today and you'll also get free, 7-day access to the Premium Sections on my website, including valuable tools and charts dedicated to serious PM Investors and Speculators. It's free and you may unsubscribe at any time.

Interested in increasing your profits in the PM sector? Want to know which stocks to buy? Would you like to improve your risk/reward ratio?

Apart from weekly Premium Updates and quick Market Alerts, members of the Sunshine Profits’ Premium Service gain access to Charts, Tools and Key Principles sections. Click the following link to find out how many benefits this means to you. Naturally, you may browse the sample version and easily sing-up for a free weekly trial to see if the Premium Service meets your expectations.

All essays, research and information found above represent analyses and opinions of Mr. Radomski and Sunshine Profits' associates only. As such, it may prove wrong and be a subject to change without notice. Opinions and analyses were based on data available to authors of respective essays at the time of writing. Although the information provided above is based on careful research and sources that are believed to be accurate, Mr. Radomski and his associates do not guarantee the accuracy or thoroughness of the data or information reported. The opinions published above belong to Mr. Radomski or respective associates and are neither an offer nor a recommendation to purchase or sell securities. Mr. Radomski is not a Registered Securities Advisor. Mr. Radomski does not recommend services, products, business or investment in any company mentioned in any of his essays or reports. Materials published above have been prepared for your private use and their sole purpose is to educate readers about various investments.

By reading Mr. Radomski's essays or reports you fully agree that he will not be held responsible or liable for any decisions you make regarding any information provided in these essays or reports. Investing, trading and speculation in any financial markets may involve high risk of loss. We strongly advise that you consult a certified investment advisor and we encourage you to do your own research before making any investment decision. Mr. Radomski, Sunshine Profits' employees and affiliates as well as members of their families may have a short or long position in any securities, including those mentioned in any of the reports or essays, and may make additional purchases and/or sales of those securities without notice.

Disclosure: no positions
1 Comment
To ensure this doesn’t happen in the future, please enable Javascript and cookies in your browser.
Is this happening to you frequently? Please report it on our feedback forum.
If you have an ad-blocker enabled you may be blocked from proceeding. Please disable your ad-blocker and refresh.