Disclosure: I am/we are long GLD.

Is this NO going to be loud enough to shake the earth? What about the stock markets? It certainly is possible.

The last two days have been positive. Our charts look good for a rally. But the election might intrude. 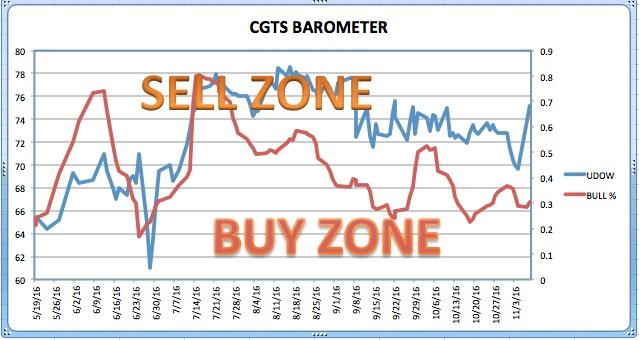 Our BAROMETER has not been especially accurate during this last two months. It looks like it has bottomed -- and we expect a rally from here.

We re-worked our DASHBOARD to include more information. Trends are turning back up. So far our PROP1 has proven itself to be impressive. PROP1 and PROP2 suggested this selloff -- but also claimed it was NOT a crash. It has not (yet) been a crash. So far the PROPS are proving themselves to be very useful. 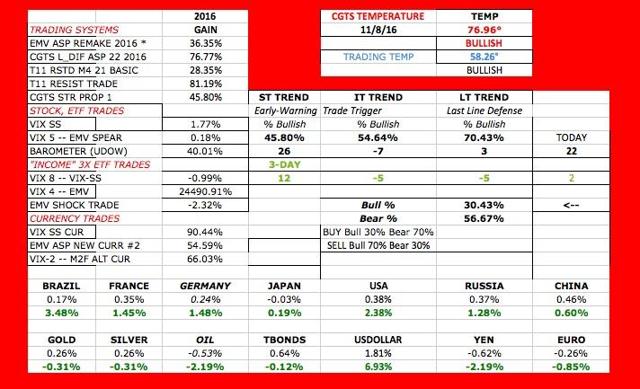 Here's our report for today:

We should mention our change in our SHOCK TRADE criteria. We now require our 2 moving parts to generate a long trade to be 1) oversold EMV (<0); AND 2) PROP to equal -7, an absolute bottom, rather than simply >= -7. For short trades we require an overbought EMV (>0) AND a PROP equal -13.

We want to show a picture of a couple of these SHOCK TRADE changes. First, however, one of my favorite stocks, making a bottom -- pre-election bottom: 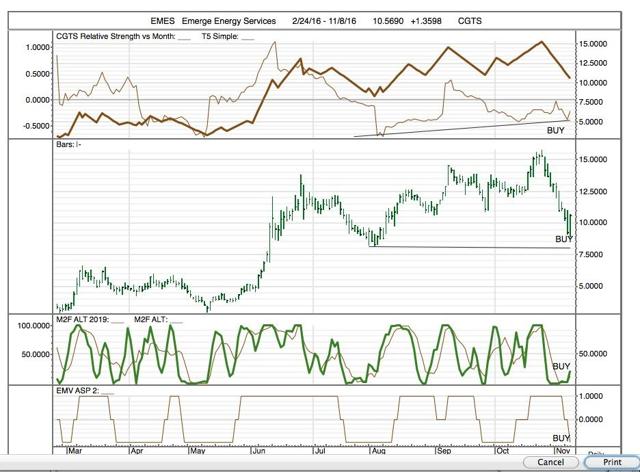 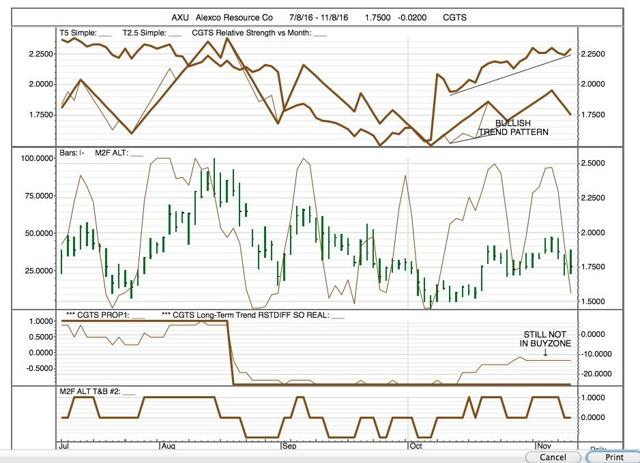 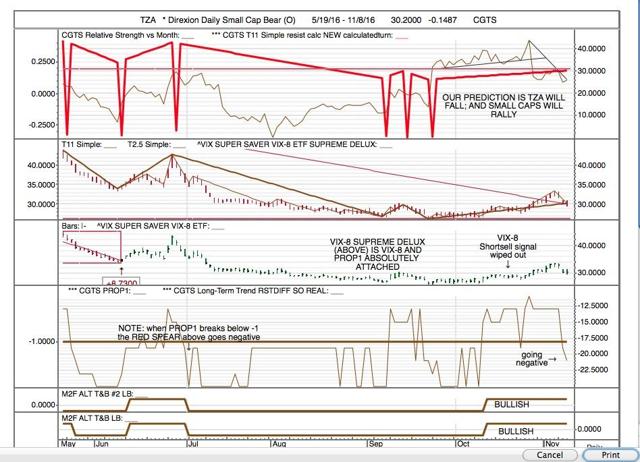 Cooper is soaring. Don't get too excited. I am watching copper -- I am almost excited. But not yet. We are heading into recession -- copper will let us know when the economy is beginning to grow. 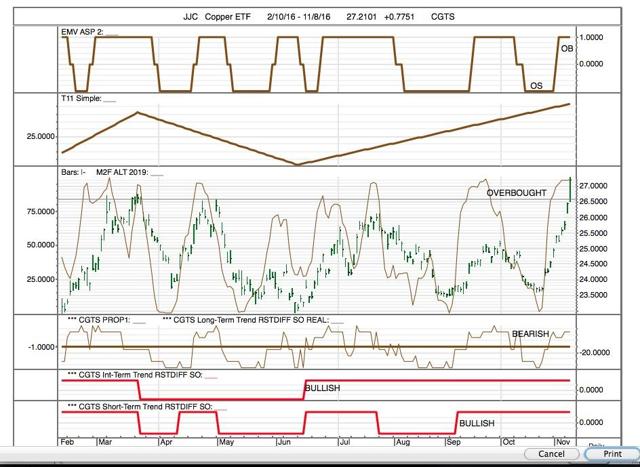 Look at the monthly chart of copper: 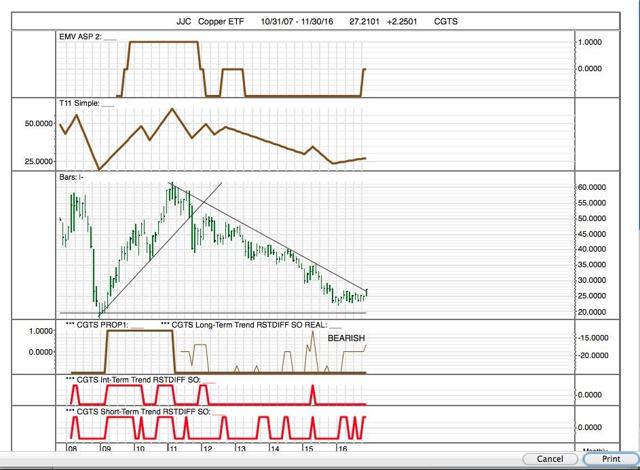 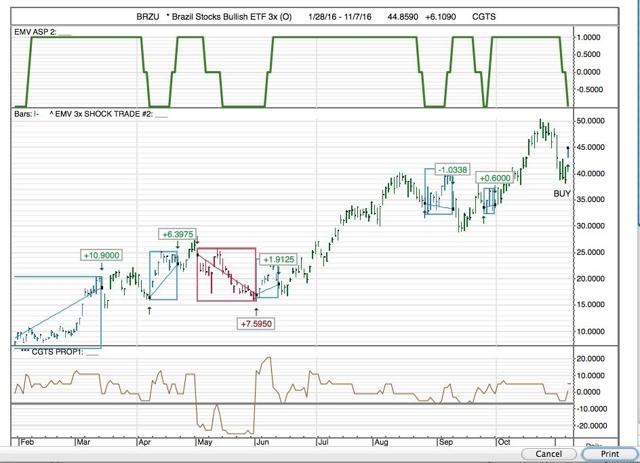 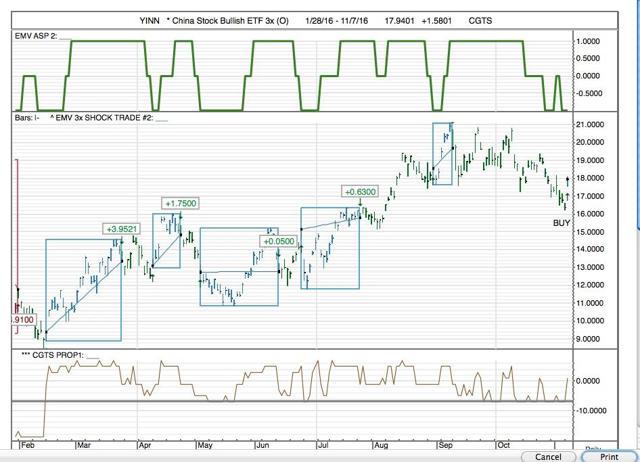 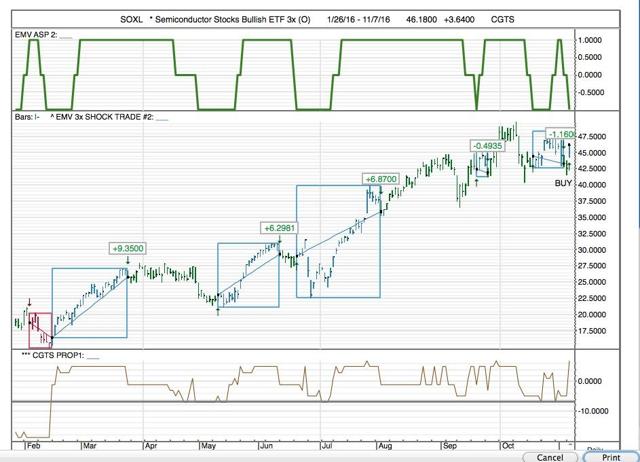 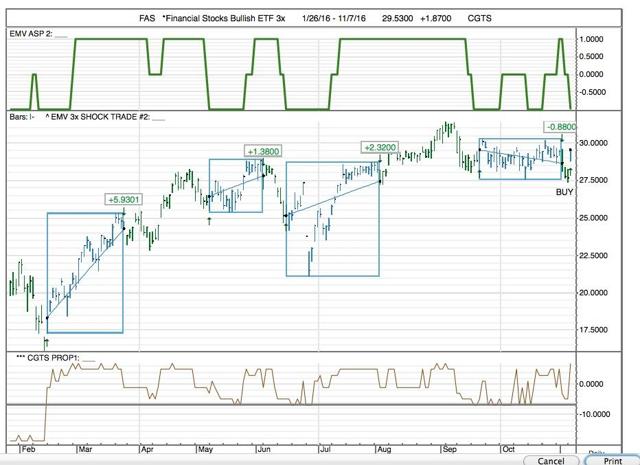 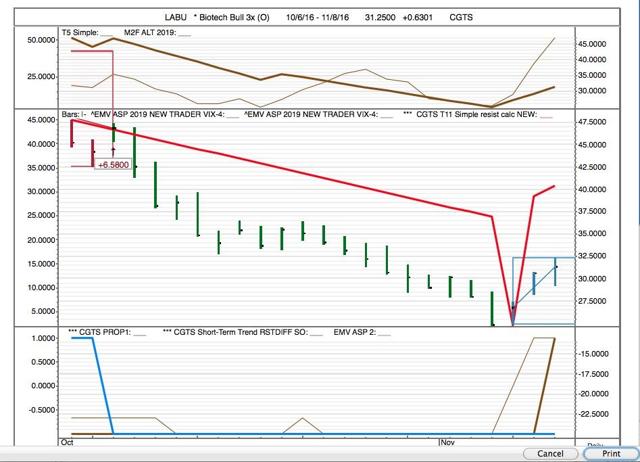 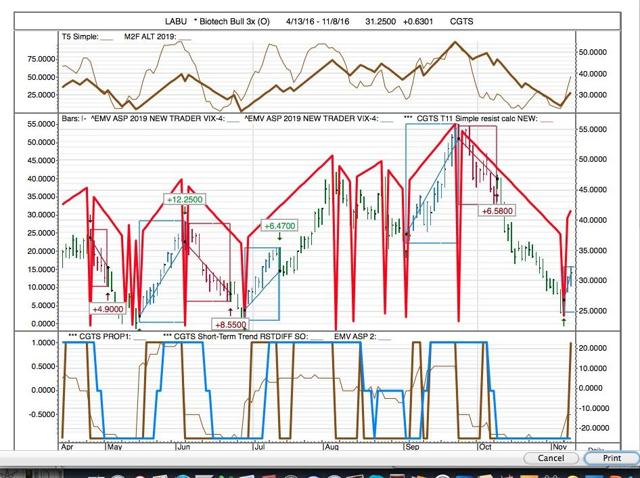 We have two SPEAR CHANGES we would like to look at. LBJ looks like a BUY. This, with BRZU, is a vote for the oil economy. VIX is a SELL. (US Futures are sinking because of the election results.) VRX is a SHORTSELL. 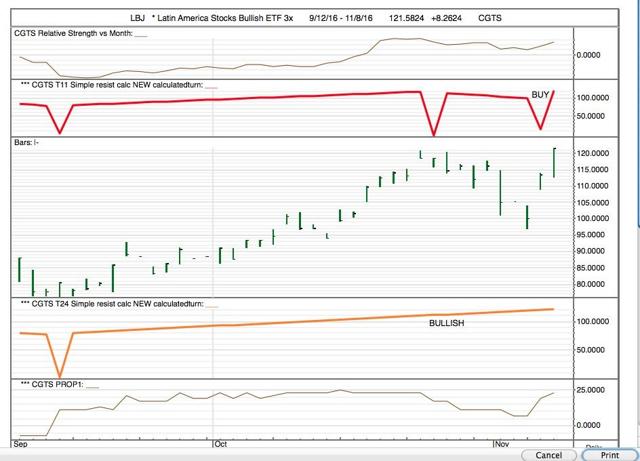 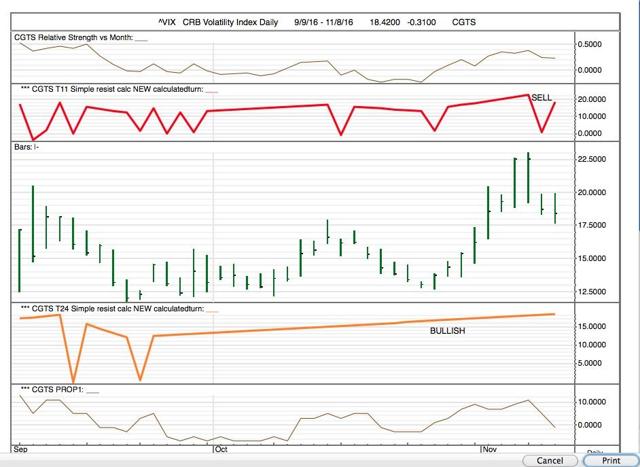 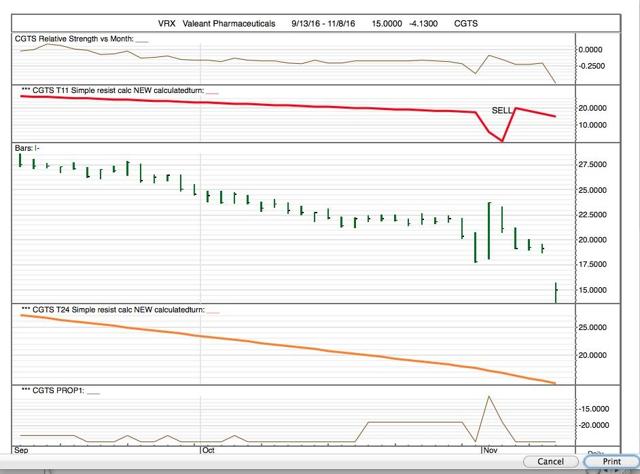 For those of you who are shocked by the election results, I might refer you to my philosophical treatise in which I predicted either a Trump victory or at the very least a transition to the political right that will click in like clockwork in 2019. Here is what I wrote/write:

Donald Trump is a flawed Father Figure, yes. Hillary Clinton is also flawed (she is no Jimmy Carter). Here is my prediction. IF Hillary Clinton wins the Presidency in 2016, her reign will be a failure, as we slip into deeper financial, economic and social CHAOS, into material LUNACY.

In 2019, we will begin transforming the Negative Energy (lunar) back into Positive Energy (Solar). (Remember, Positive Spiritual Energy IS Negative Material Energy.) If Donald Trump fails in 2016, then we will have an even stronger Father Figure appear in 2019, whose job will be to 'order Chaos' and generate re-creation of the world. Creation IS the re-ordering of Chaos. Sleep is material chaos. We reorder the Earth by waking up each morning -- which begins the dis-ordering of Heaven.

My prediction is that the Father-Figure, Republican, Left-Brain, Law and Order, Literalist, Realist, Pragmatist is coming, is inevitable. He can come earlier than 2019. He IS coming.

Is Donald Trump this Father Figure? This is not clear.

The Democratic Era (2001-2019) is ending. The Spiritual Evolution Era is ending. We will receive a new body in 2019 and will begin reordering the Earth. This reordering period cannot be accomplished by the Right Brain. This is a Left Brain assignment.

Physical Evolution, the creation of the Earthly Temple, the City, Civilization, is the Fatherland's job. The Motherland's job is to guide the Spiritual Evolution of the Human Race, to build the Heavenly Temple -- AND to give birth to the next cycle, the Next Man, the Next Earth.

The Earth is pregnant, and will give birth to a New Life in 2019.

I am signing off early tonight. It is only 8:29 on the West Coast. Trump is winning; and the elitist broadcasting establishment is scared to death. I see this as a good thing.

Globalism is losing. This tells us that Protectionism is coming.

In 2019 the Old World ends; and the New World begins. It looks like Trump might win; and it looks like the Republicans will hold the Senate and the House. Time is running out of the Democrats. My view is that this is a good thing. That the mechanism is designed as a force of balance. The Republicans are better at organizing the material world; and the Democrats are better at organizing the spiritual world. We need both. If we think one side is better, smarter, or more moral than the other side, then we suffer with such balancing -- the wrong side is winning. But if you understand this as a necessary balancing, then such change is NOT a loss of identity.

Hold your hat if Trump wins. Gold Bulls are up 4% in Asia at the moment. Dow futures are down 1,000 points. The US Dollar is down 3.3% against the Japanese Yen. Treasury Bond yields are crashing.

Disclosure: I am/we are long BRZU.