Stocks took a step back on Thursday, as TRADE WAR animosities dominated the news. PRESIDENT TRUMP pressed for trade tariffs against the EU, Canada and Mexico -- steel and aluminum -- and also suggested a ban on (all?) German luxury cars. Canada pushed for its own 25% tariffs against the US -- on items as large as steel slabs to as small as ink pens and chocolate. Europe responded with threats against the US as well.

DER SPIEGEL, Germany's TIME MAGAZINE, replied with its own poster of the troubles of the era.

Very dramatic. Why would Trump threaten Germany this way? Is he just mean? Or is he responding to 'unfair' trade issues. Looking a little deeper than the headlines we find:

There's a 10% import tariff for U.S. cars going into Europe and just a 2.5% import tariff for European cars coming into the U.S. The White House could level those tariffs, matching Europe's 10% or possibly going even higher. A similar relationship previously existed between China and the U.S. However, China recently lowered its automotive import tariff from 25% to 15%.

GPRO first. I was SHORT for most of last year. I am out now. GPRO is basing, trying to BOTTOM -- but still BEARISH. 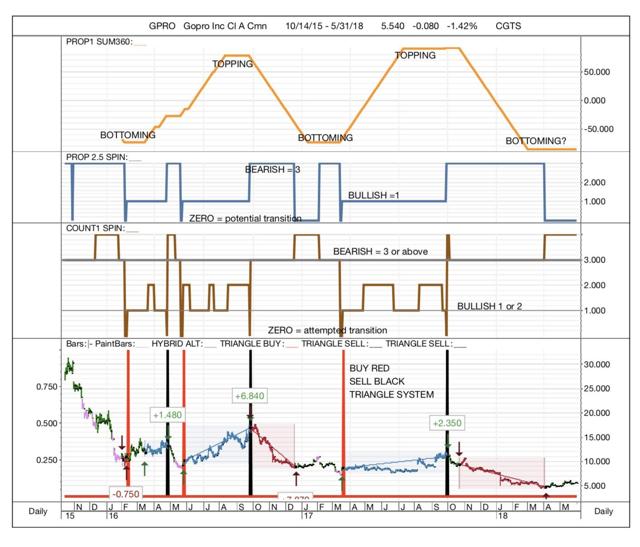 And TWTR? A beautiful ascent. Look how TRIANGLE (RED DIGIT BUY) and SUM360 both called the BOTTOM back in MAY 2016. Sure, Sell in May and Go Away. (I will take a closer look at that notion some other time.). It was followed by a BLACK DIGIT -- one can think of this as a middle finger -- that became a TRADING SELL SIGNAL (as SUM360 did not decline, but flatlined) from October 2016 to April 2017 -- then, again, a TRIANGLE BUY that is still in place. If we look only at TWTR, we see that the AXION "Sell in May and Go Away" would have been horrible advice for the last two years. 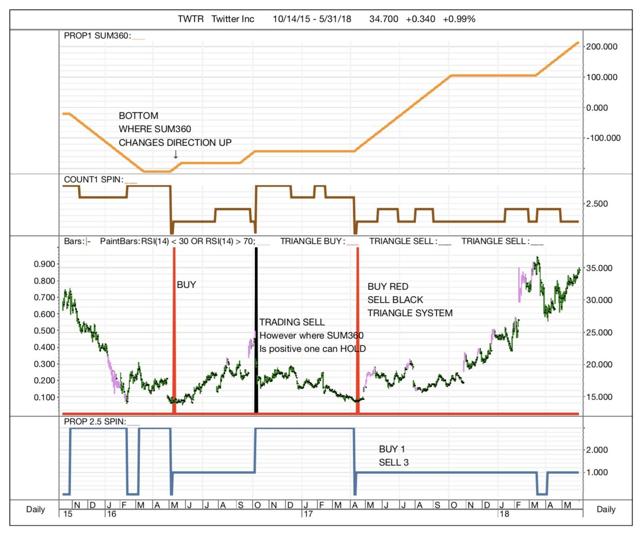 I read another SA post last night concerning BIOGEN, BIIB. So I looked at the chart. Very nice chart. So I'm posting that also. A nice spot to get back in. Remember, HYBRID ALT requires that SUM360 be rising or stationary at +360 max; and that EITHER COUNT1 SPIN =1 or PROP2.5 SPIN = 1. 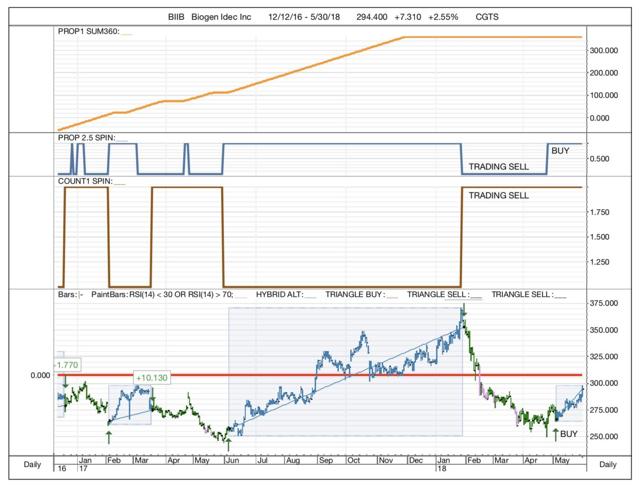 NDX is back in M2F ALT OVERBOUGHT territory. What does this mean? PROP2 Spin still positive. COUNTPoint6 still positive. THERE IS A LOT OF PANIC IN THE AIR. FEAR. CHAOS. 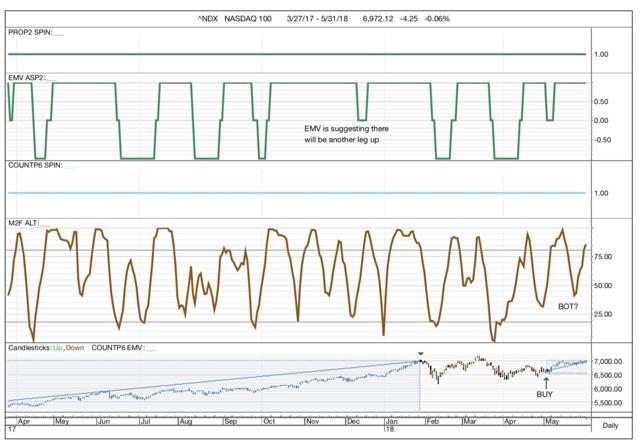 We have a few SUM360 changes -- not many yet. VIX is on the list, with ZERO DIFF. It bumped up yesterday; flattened today. But look what the TRIANGLE indicator says about VIX. 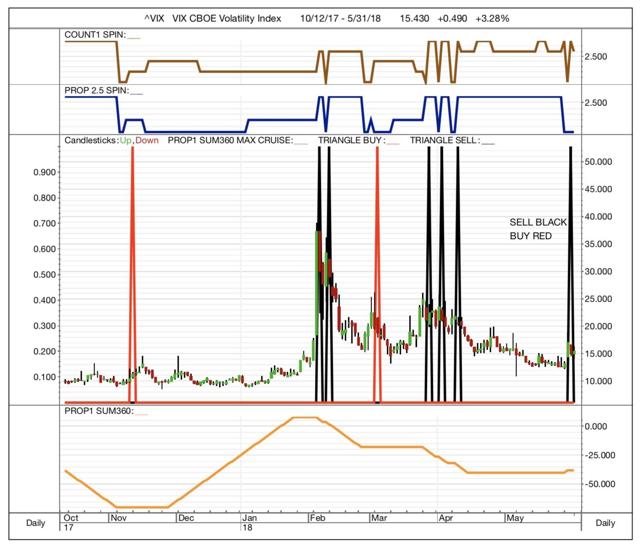 Another stock shows up on the SUM360 RISERS list, TWLO, TWILIO. 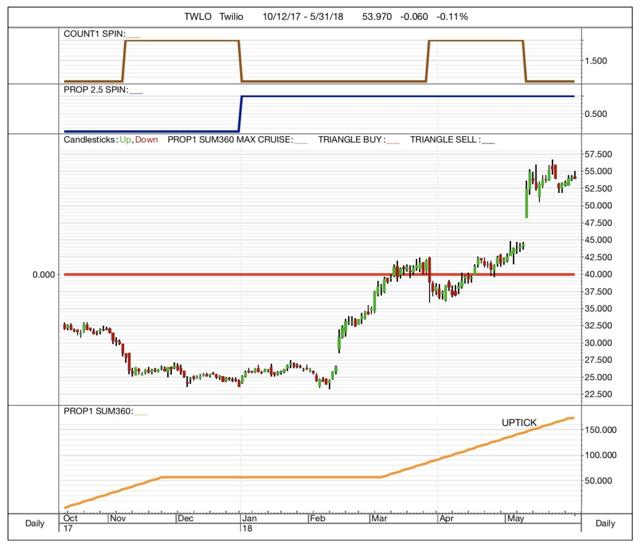 We're a bit listless today. We have a TRIANGLE2 list. All of these (LONG issues) have switched states (from SHORT or FLAT) in the last month. They are all TRIANGLE LONG and SUM360 LONG.

No new signals so no charts.

I was going to make this a PORTFOLIO REVIEW day -- and then stocks tanked, taking some shine off the project. But here is out NEW HYBRID SYSTEM PORTFOLIO. Note, TWO SYSTEMS here, HYBRID and HYBRID ALT. Issues with MJC in the column are issues in my TRADING PORTFOLIO also. The portfolio is up 4.5% since 5/14/28, and annualized 124.56% -- a nice feature of the NEW PROT-TA GOLD software (Macintosh only). 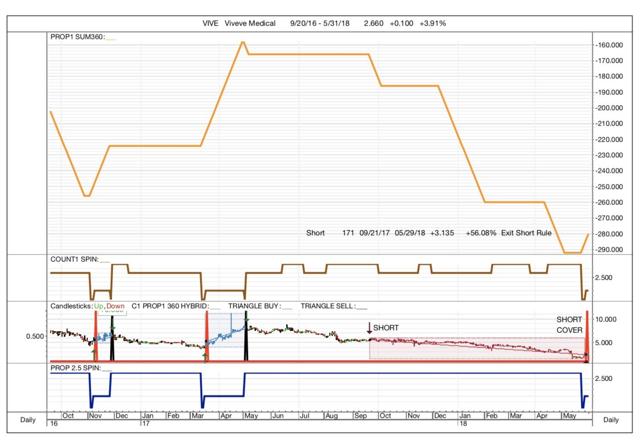 We will try to do a PORTFOLIO REVIEW at least once a week.