Our model links the rate of participation in labor force, LFP, to the change in real GDP per capita. The latter leads by two years, and we have successfully predicted the fall in LFP in 2009. For short time intervals, one can replace labor force with employment, E, and GDP per capita with GDP. Figure 1 shows the evolution of dGDP/GDPdt =dlnGDP/dt (the time derivative of real GDP normalized to the attained level of GDP) and E/P (employment population ratio) in the U.S. after 1990. The latter variable is reduced by 60% and shifted 12 months ahead in order to fit the level of dlnGPD/dt between 1990 and 2010.
The overall agreement between the curves is excellent and allows forecasting the E/P, the dGDP/GDPdt curve leads by 12 months. Then, the current E/P value corresponds to May 2010. Therefore, the E/P should jump to the level of 63% by the end of 2011. 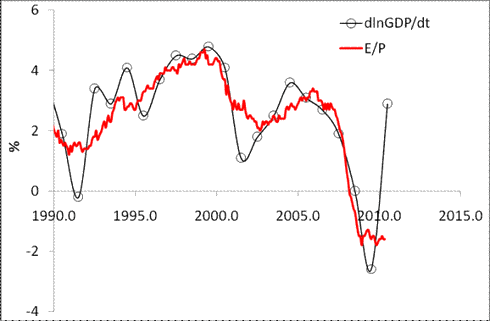